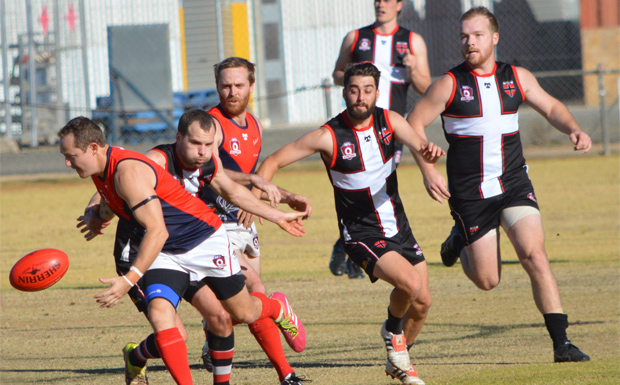 It’s quite a few months until the AFL Darling Downs season begins, but the South Burnett Saints have been wasting no time in making their preparations for 2019.

Those preparations will hit another milestone soon, with the official commencement of pre-season training for both the men’s and women’s teams.

Training for the men’s team will begin at 5:30pm next Monday (November 26) at the Kingaroy State School oval in Alford Street.

The Saints are taking a different path with their coaching and training this season, with the appointment of a five-person coaching and mentoring panel.

Each coach within this group has a different role, with training and game plan responsibilities residing with former player, Clinton Brown.

“We are looking to get an early start to our preparations this year, working on tactics, skills and fitness in the lead up to the new year,” Clinton said.

“Training will be held on Mondays and Wednesdays to start with as we want to show respect to some of the players who also play cricket.

“We are also using the school facilities just to change things up a bit and keep the players fresh.”

Training will revert to the traditional Tuesdays and Thursdays, as well as to the Saints home ground at Lyle Vidler Oval, closer to the start of the season.

The women’s team will officially begin their pre-season training at the Maidenwell sports ground at 10:30am on Sunday, December 2.

The team will be jointly coached by Andrew Foley, Dan Trace and Damon Meadows.

Following the initial Maidenwell session, the Saints will be offering two Wednesday evening venues at which their players can train.

Andrew said that having a Toowoomba-based option would provide training opportunities for Saints players who don’t live in the South Burnett.

“Last season we had players from Toowoomba, Dalby and other centres who liked playing for the Saints but were missing training opportunities,” he said.

“There are also some players who just like playing for a country club and not a city one.

“So we are trying to fill a gap for some of our existing players, as well as attract some new players. We don’t know how it will go but we hope it will be a winner.”

Dan will oversee the Kingaroy-based sessions, whilst Andrew and Damon will run those in Toowoomba.

New players for both teams are always welcome, whether experienced or not.