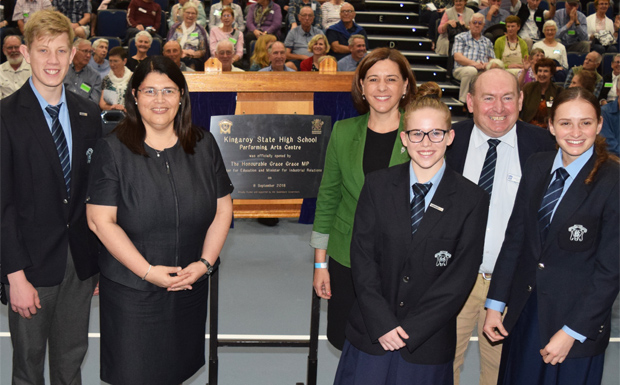 It’s taken more than a decade – and many twists and turns along the way – but the curtain has finally lifted for the new Kingaroy Performing Arts Centre (KPAC) on Saturday.

The $4.95 million facility was officially opened by Education Minister Grace Grace as the centrepiece of the high school’s celebration of a century of secondary schooling in Kingaroy.

The opening was witnessed by several hundred former students and staff, many of whom travelled back to the South Burnett to attend the event.

Ms Grace, who was filling in for Premier Annastacia Palaszczuk, said she was very proud to open the venue and bring a much-needed new facility to the high school.

“This wonderful building will add a new dimension to performing arts at the school, and it will also provide a space for outside organisations to hold functions,” she said.

“The hall includes a foyer and covered entry, an auditorium, a stage, change rooms and amenities, an audio-visual control room, a data room, a storage room, kitchen/kiosk, an office, a multi-purpose classroom and a cleaners’ storeroom.

“Our students and staff are all very excited to be using this state-of-the-art facility, with our bands, choirs and dancers now able to practice routines for events such as Creative Generation and Fanfare,” Mr Roediger said.

“The centre will also be a great venue to hold larger assemblies and events which were previously hosted in the school sports centre or the local hall.”

Mrs Frecklington said she thought the new building was a wonderful addition to the school and praised builders BBN Constructions for their work.

Cr Potter said she was awed by the sheer size of the building.

David Ballin reminded guests that many people had a hand in bringing the project to fruition over many years and deserved praise for their efforts, too.

The 1320 sq m building – which can accommodate up to 1000 people – is now the largest indoor venue in the South Burnett.

Its opening puts the seal on a project that began not long after the death of former Queensland Premier Sir Joh Bjelke-Petersen in April 2005.

In 2007, Kingaroy Shire Council proposed building the Sir Joh Bjelke-Petersen Cultural and Memorial Centre to provide a performing arts centre for the region which would include a conference and exhibition area. A small museum remembering Sir Joh’s achievements would also be included.

A 94-page feasibility report was prepared for the Council by the Pacific Southwest Strategy Group.

The $15 million project was planned to be built at Kingaroy Showgrounds.

However, this idea was scrapped in September 2008 when the Show Society declined the Council’s offer to be included in the project.

It was then suggested a smaller project involving an auditorium and music rooms be considered for the grounds of Kingaroy High School.

The KSHS P&C began fundraising to make the dream a reality.

In October 2011, South Burnett Regional Council voted to allocate $42,500 out of its 2011-12 Budget towards Stage 1 of a joint school/public use facility to be built in the high school’s grounds.

Work began on the $1.5 million Stage 1 in 2012, which included practice and rehearsal rooms, storage areas, toilets and staff offices.

This was officially opened in November that year.

The P&C then began raising funds for Stage 2, which was originally planned to be a combined performing arts centre and sports arena.

In October last year, the State Government announced it would commit $4.5 million towards Stage 2.

The P&C contributed an extra $350,000 to the project for internal fit-outs and equipment.

Construction started last year and workers were still putting the final touches on the new building just days before the launch.

This was because current high school enrolments already exceeded KPAC’s capacity, and look set to grow even more.

The drive for the biggest possible building involved several changes to the original design, including the abandonment of the sports area.

“But the end result is that we now have a building that can accommodate big crowds safely, as well as a wonderful performance and assembly space,” Rob said.

“The P&C wants to continue upgrading the internal facilities over time so we can bring KPAC up to the same standards as Toowoomba’s Empire Theatre or the Brolga Theatre in Maryborough.

“But this is a very, very good start.” 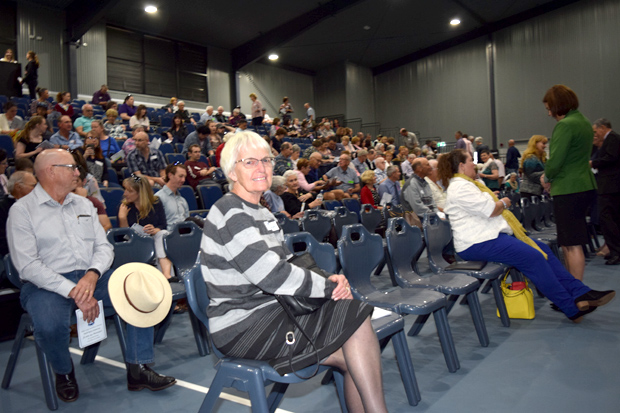 KPAC has 620 retractable seats in 12 tiers, and can easily accommodate up to 1000 people with extra ground-level seating 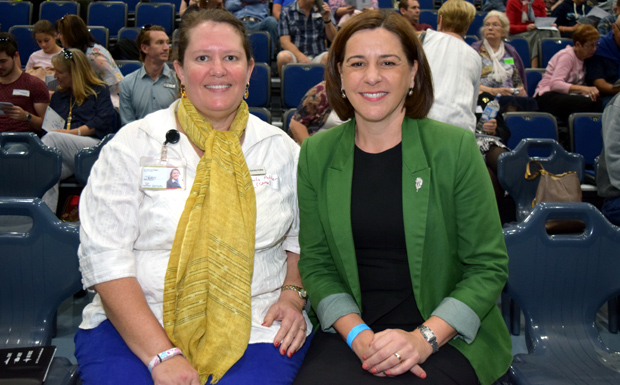 Cr Danita Potter chatted with Member for Nanango Deb Frecklington before the official opening … both said they were very impressed with the new facility, which has been 11 years in the making 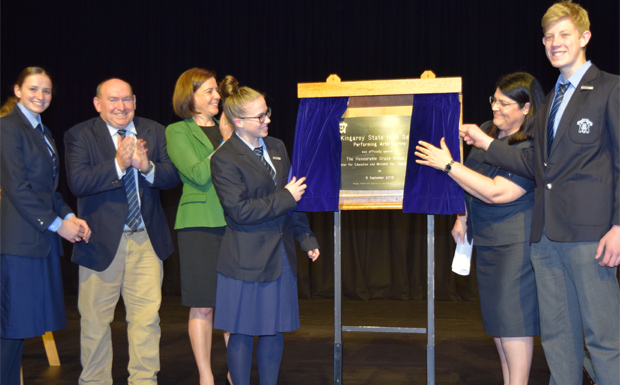