Season Builds To An Exciting Climax 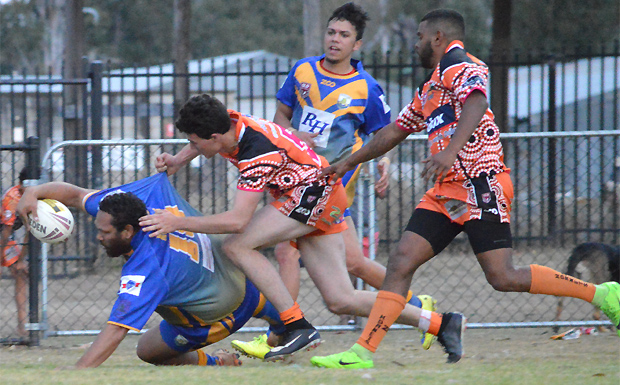 With Cherbourg leading 32-22, Mark Saltner gets the ball down cleanly in the corner to bring Murgon back into contention in the second half

South Burnett rugby league is reaching a crescendo after a huge weekend of Major and Minor Semi-Finals played at Cherbourg last Saturday, plus success for the South Burnett Eagles U16s women’s team at Maroochydore.

The semi-finals sent some teams straight through to their Grand Finals – which will be played in Nanango next Saturday – while other teams will face sudden death Preliminary Finals this Saturday.

The girls will now play Caboolture in the Grand Final at 2:20pm on Saturday at Cooroy. 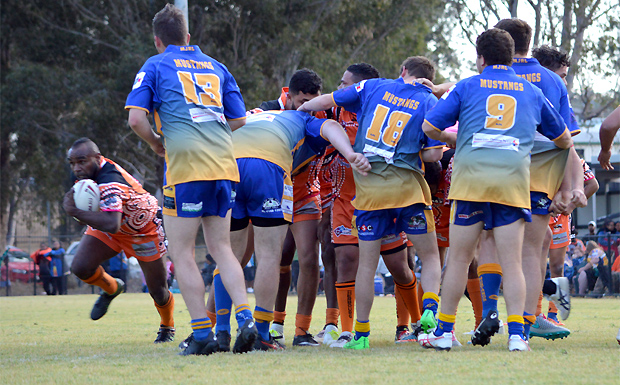 In South Burnett A Grade, the Murgon Mustangs ended the Cherbourg Hornets’ 2018 season in a closely fought Minor Semi-Final at Cherbourg.

The 2018 Grand Final replay ended with Murgon coming out trumps again after an 80-minute armwrestle.

Cherbourg started strongly, putting the first points on the board but Murgon responded almost immediately.

An opportunity for Cherbourg to draw ahead just before the break failed when the ball was lost over the line.

At the mid-point of the second half the scores were locked at 32-all.

Soon afterwards, tempers flared with players from both sides realising their season was on the line.

With 15 minutes to go, a Cherbourg player was sin-binned but to the Hornets’ credit they kept the Mustangs out while they were a player short.

Christopher Bond converted from right in front to take the final score to Murgon 38, Cherbourg 32 in one of the most exciting games of league played this season. 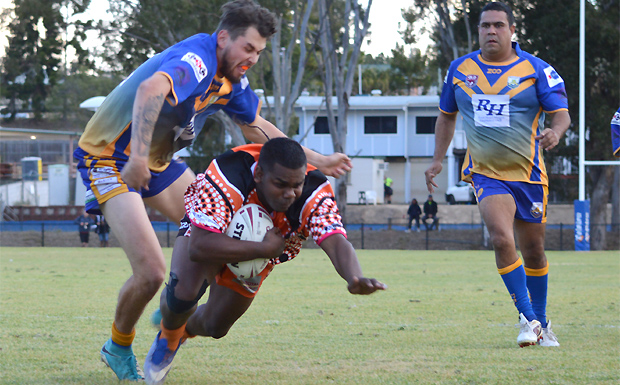 Norman Wragge adds some more points for the Hornets 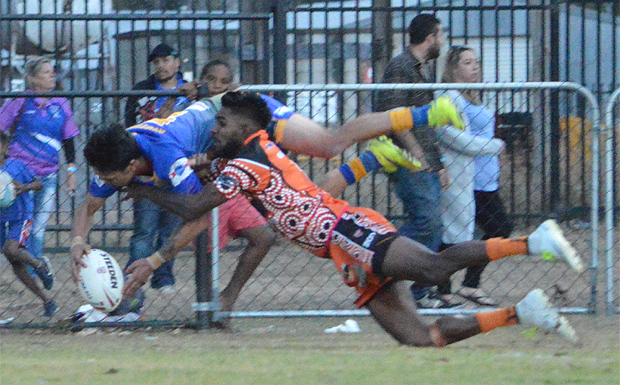 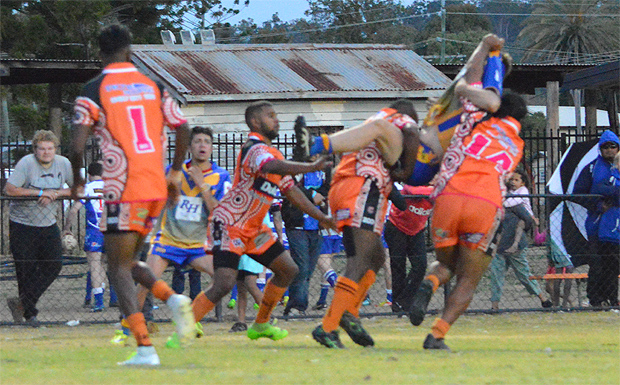 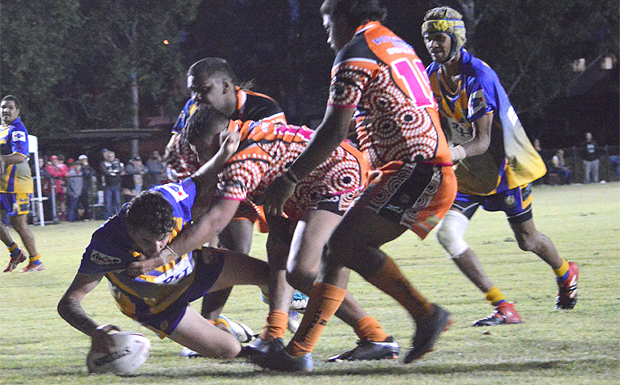 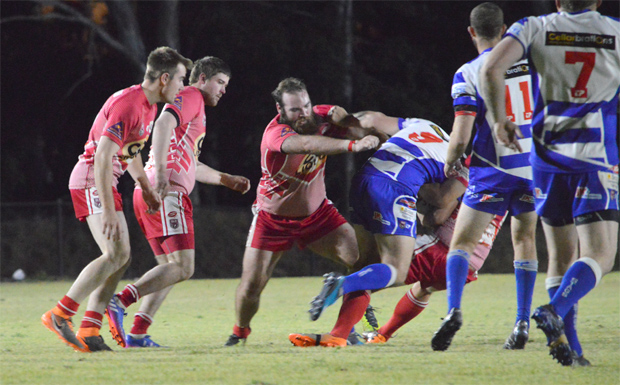 The A Grade Major Semi-Final was a match-up between the rampaging Nanango Stags and the Kingaroy Red Ants, the only team which has managed to defeat Nanango this season … way back in Round 3 (and only by two points …)

Nanango were true to form, despatching Kingaroy 48-24 to earn the first spot in the A Grade Grand Final.

The Stags kept Kingaroy scoreless for most of the first half, leading 30-0 with three minutes to the break.

However, Kingaroy’s Adam Geiger improved the scoreboard with a late try, converted by Kirby Rubesaame, to take the scoreboard to a more respectable 30-6 at half-time.

The Red Ants were much stronger in the second half, scoring four tries to Nanango’s three, but it wasn’t enough to bring home the bacon on BaconFest day …

Kingaroy will get another chance this week when they face Murgon in the Preliminary Final which will be played at T.J. O’Neill Oval in Kingaroy at 6:30pm on Saturday. 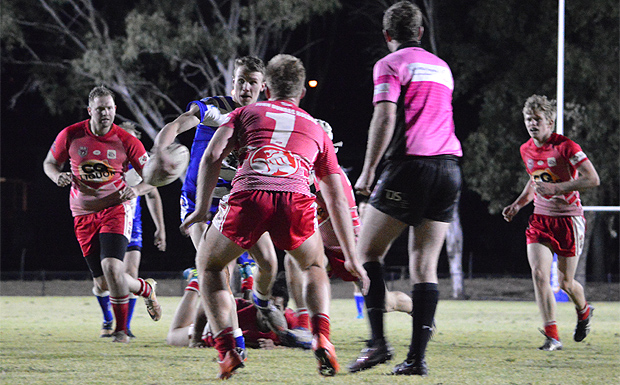 As they’ve been doing all season, the Stags played with speed and attacking flair … 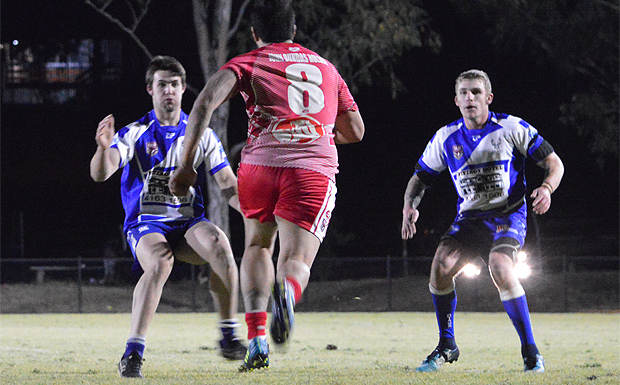 … and their defence was also on target 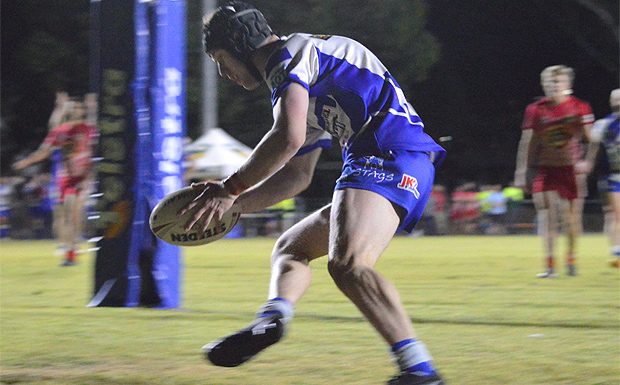 It was a big win by the Mustangs but the Hornets have got another chance.

Murgon have earned a spot in the Grand Final.

Kingaroy will play Cherbourg in Gayndah on Saturday in the Preliminary Final to determine the second Grand Final spot. 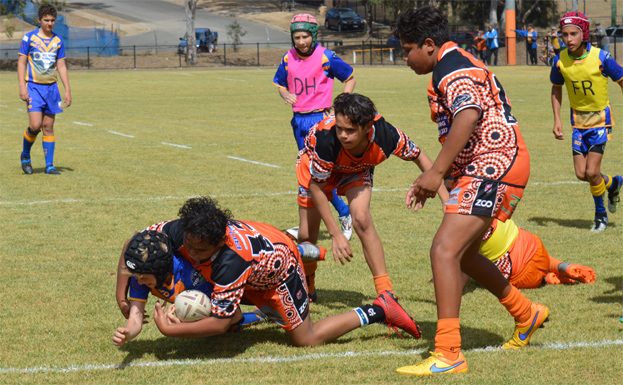 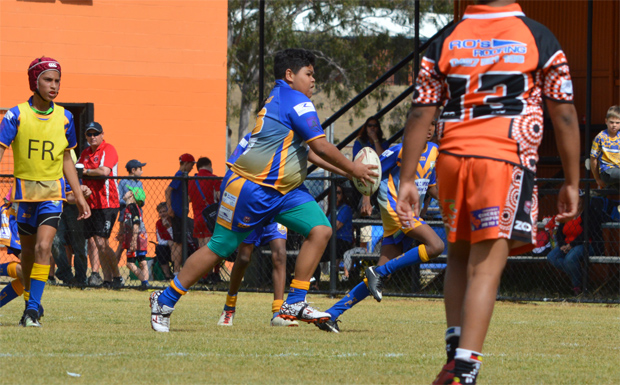 Trequaan Stanley runs away to score for the Mustangs in U12s 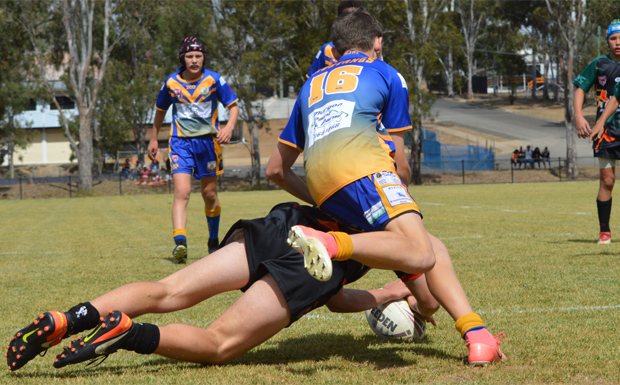 In Under 14s, Murgon’s 2018 season ended after they went down in a very close game against the Central Burnett Brumbies.

At half-time, the Brumbies were ahead 22-10 but a Murgon fightback in the second half led to the scores being locked at 26-all with just 13 minutes to go.

The Brumbies then withstood a desperate Murgon attack in the last few minutes to finish on top. 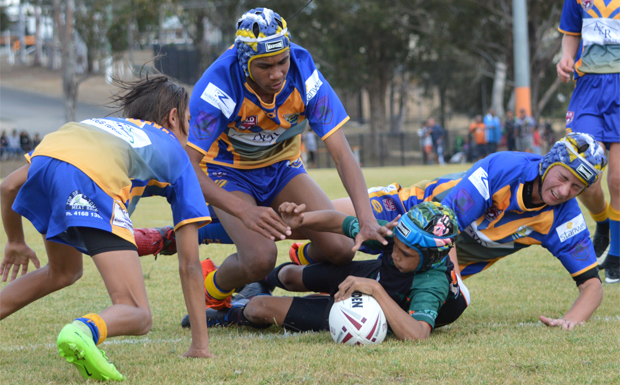 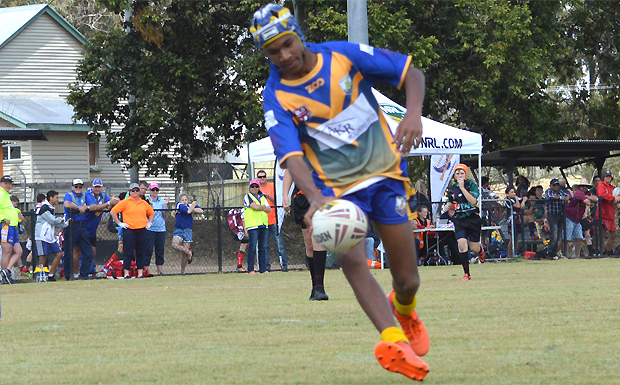 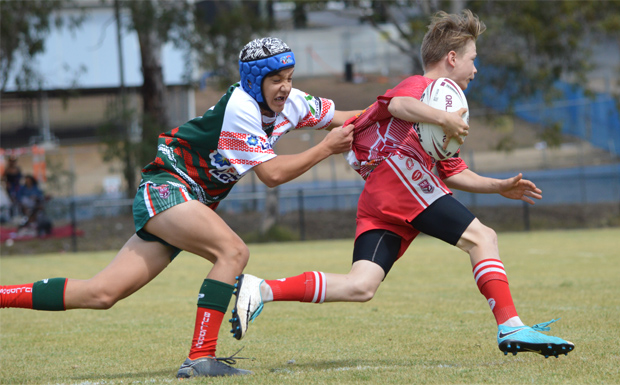 In the other U14s semi-final, Kingaroy were just two points behind at half-time (8-6) after Harrison Brown ran nearly the length of the field to score.

However, Chinchilla proved too good in the second half.

The Red Ants will live to fight again with a chance in the Preliminary Final to be played on Saturday.

Chinchilla have earned a spot in the Grand Final.

Central Burnett will play Kingaroy in Gayndah on Saturday in the Preliminary Final to determine the second Grand Final spot. 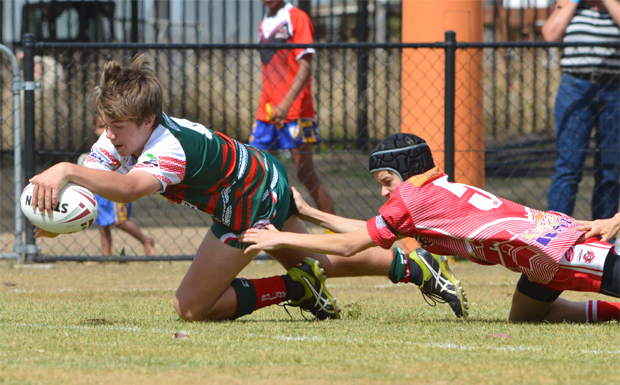 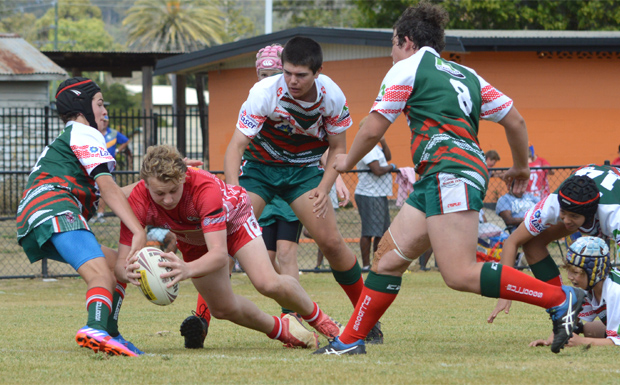 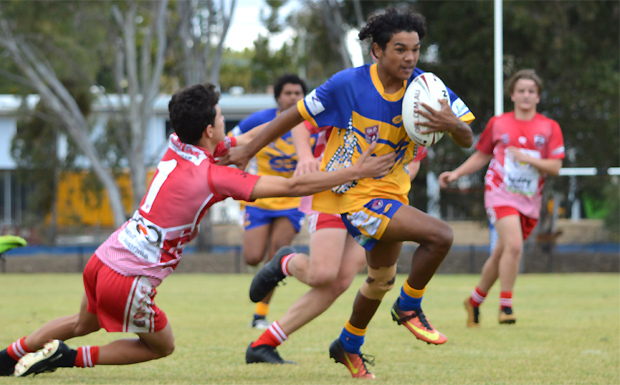 Kingaroy’s 2018 season is over in Under 16s, but they went down fighting.

At half-time the scores were locked at 6-all, although Murgon were unlucky not to pick up at least three more tries.

The Mustangs galloped away in the second half, finishing the game in an unlikely fashion with a successful penalty goal after the full-time siren. 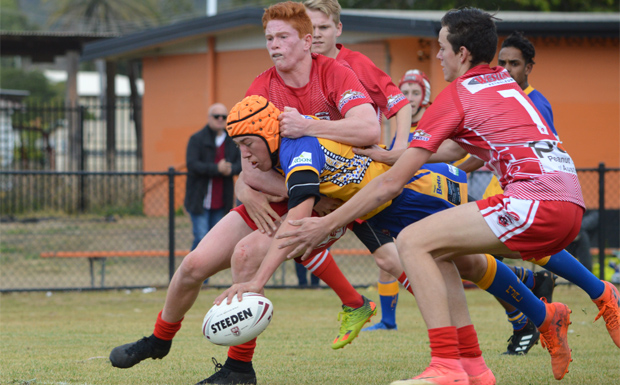 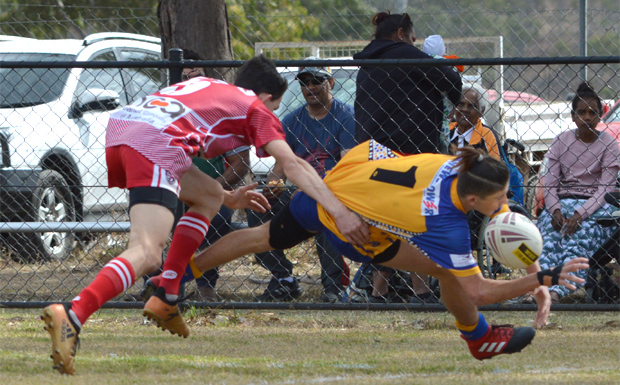 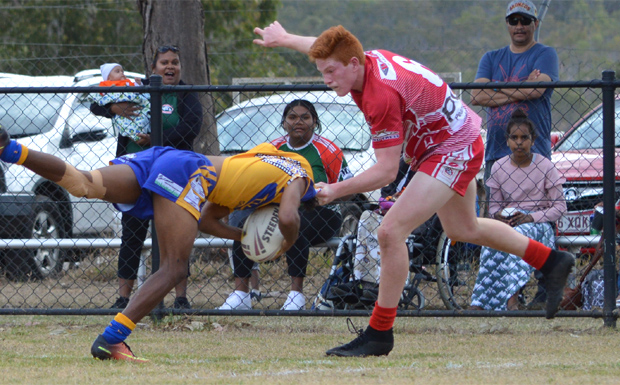 … and no try number three, after some great Red Ants’ defence 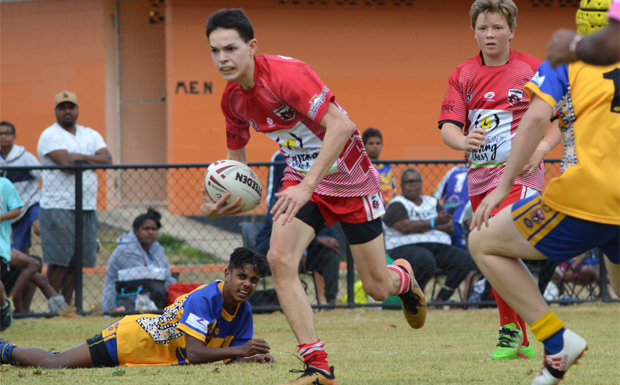 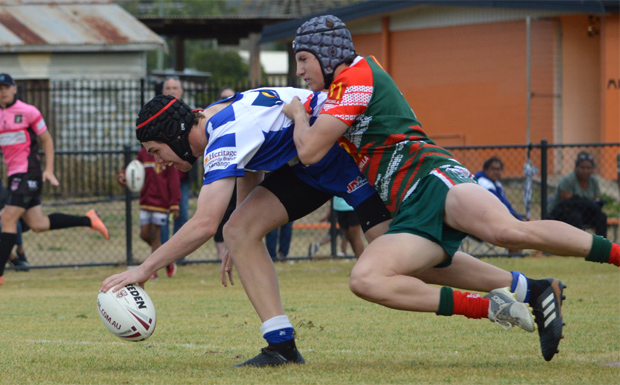 The 16s Major Semi-Final game was marred by a Chinchilla player suffering a knee injury in an awkward tackle midway through the first half.

This caused a major delay while ambulance paramedics treated him before transporting him to hospital.

When play resumed, the Bulldogs took a while to get back into the swing and at half-time were behind 12-8.

The Stags simply proved too strong in the second half, putting on four tries in just 10 minutes.

Chinchilla scored a consolation try with just a few seconds left in the game.

Nanango have earned a spot in the Grand Final.

Murgon will play Chinchilla in Gayndah on Saturday in the Preliminary Final to determine the second Grand Final spot. 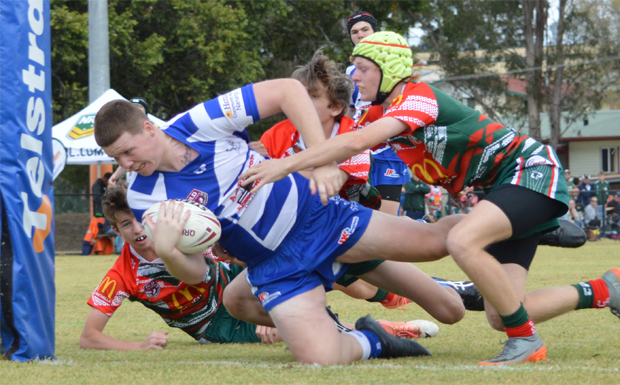 Blake Shirley scores between the posts for Nanango in U16s 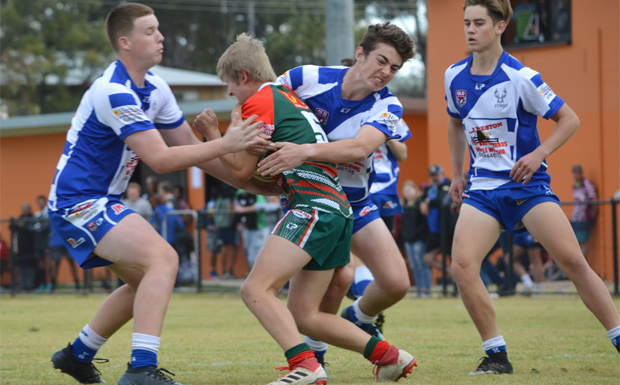 Nanango’s defence proved a handful for the Chinchilla Bulldogs