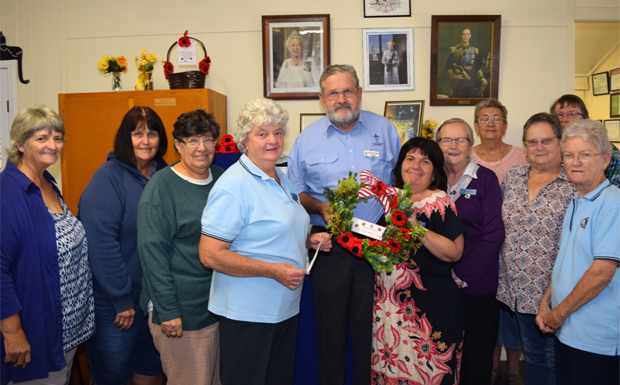 Proston QCWA members presented a $1500 cheque to William Kearney, from Legacy, at their monthly branch meeting on Monday … most of the money came from poppies created by members and sold at Boondooma Homestead

An unusual Anzac Day project paid off on Monday when Proston QCWA members presented a cheque for $1500 to Legacy.

The project involved a partnership between the QCWA branch and Boondooma Homestead.

Members crocheted and knitted the little red poppies at their weekly craft meetings.

Boondooma Homestead then sold them for a gold coin donation at their Spirit Of The Bush Balladeers Muster, held annually near Anzac Day.

This unique joint effort – plus some extra contributions from other branch activities – raised $1500 during the past two years.

President Val Klein handed over the cheque to William Kearney, from Legacy, at Monday’s monthly branch meeting in Proston.

She said much of the credit for the poppy project should go to Lyn Reynolds who had come up with the idea and “made 90 per cent of them”.

William told the meeting Legacy is supporting about 23 widows in the area between Murgon and Wondai.

He said there were barely a handful of World War II veterans left in the South Burnett, and their widows were also passing away as the years wore on.

Because of this, most of Legacy’s work was now focussed on post-WWII conflicts, but its aim of supporting the families of former servicemen and women remained unchanged.

Legacy Week is still Legacy’s major annual fundraiser. This year it will be held from September 2-8, with Badge Day on Friday, September 7.

William told the meeting that post-traumatic stress disorder (PTSD) was now one of the most common afflictions affecting veterans.

“Many thousands of years ago when we used to fight wars by throwing rocks at each other, the human mind could handle that,” he said.

“But the evolution of modern warfare has now got to the point where the minds of many soldiers can’t absorb it any more, and PTSD is our mind’s natural reaction to this.

“That’s why the level of PTSD in veterans is rising, and why this isn’t a problem that will go away any time soon.”

He thanked the branch for its contribution, which he said was greatly appreciated.