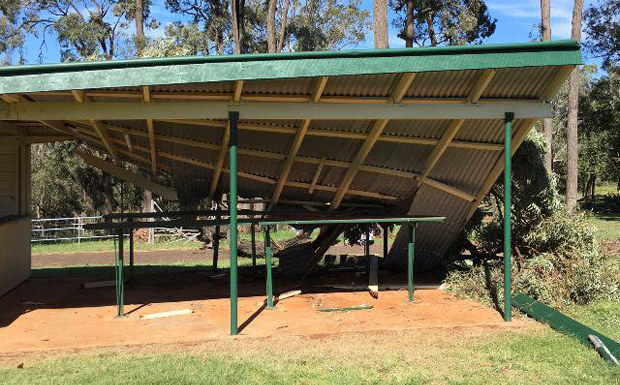 A large tree crashed on to the roof of the bar at the Proston Showground (Photo: Glenda McArdle)

Storms caused havoc in several parts of the South Burnett on Friday and Saturday evenings.

At Proston Showgrounds, large trees were snapped off at the base during Friday night’s storm.

One tree fell on to the roof of the open-air bar, partially collapsing the structure and also causing damage near the chicken pavilion.

The heavy rain and winds also caused widespread blackouts throughout the South Burnett on Saturday night.

About 190 Ergon Energy customers in the Nanango, Moffatdale, Johnstown and Barambah areas were without power for almost 13 hours due to storm damage.

Kingaroy appears to have dodged the bullet, with only Ergon customers in Parkside Drive losing power for about 20 minutes.

However, about 8:00pm on Saturday a car hit a traffic light at the Youngman and Alford streets intersection in a possible weather-related crash.

The station’s website reported the strike had “fried” its broadcast system, despite anti-surge devices being in place.

Radio technicians are now assessing the damage but the station could be off air for at least several days.

A number of trees also had to be removed from roads, particularly in the Proston area.

Storm clouds hung over the Murgon Christmas Fair on Friday night but the heavy rain held off until after Santa arrived, much to the delight of his young fans.