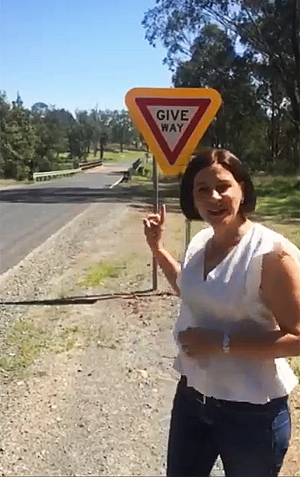 Member for Nanango Deb Frecklington at the dangerous bridge on the New England Highway at Cooyar (Photo: Nanango Electorate Office)

Member for Nanango Deb Frecklington has promised that, if elected, an LNP State Government would spend $5 million to replace a dangerous single-lane bridge at Cooyar.

Mrs Frecklington said the bridge, located on the New England Highway just south of town, has been in desperate need of widening for many years.

“The Cooyar Bridge is located on the busy New England Highway, which is the major route between the South Burnett and Toowoomba,” she said.

“This dangerous single-lane bridge is on my priority list for complete replacement.

“The upgrade will include a brand new bridge and a re-alignment of the approaches to improve visibility.

“The LNP is serious about the safety of regional motorists, and a new Cooyar Bridge will go a long way towards making a journey on the New England Highway much safer.

“The upgrade will form part of the LNP’s Royalties for the Regions Program, which aims to boost jobs and help regional communities meet critical infrastructure needs.

“Upgrading the Cooyar Bridge and re-aligning this dangerous section of the New England Highway is all part of our plan to Build a Better Queensland by
building a better Nanango Electorate.”