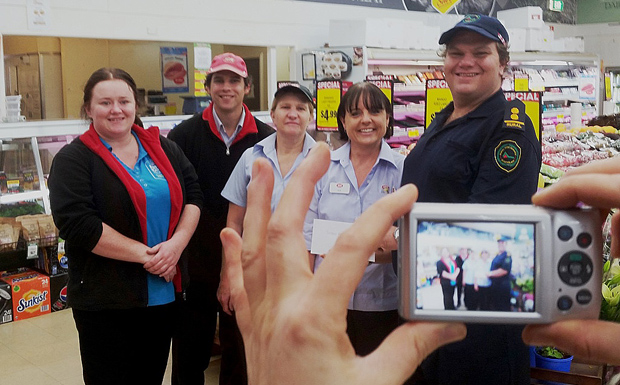 Taromeo Rural Fire Brigade volunteers will be able to take meal breaks during training and reduction burns thanks to Yarraman IGA who have come on board as the brigade’s first “Feed The Firies” sponsor.

On Wednesday,  Taromeo RFB 1st Officer Les Lane accepted $1000 worth of vouchers from the new manager at the Yarraman IGA store, Sue Riseley.

“This year we have already had a number of fires in Blackbutt Paddock. Even with rain, there are still areas that are still very dry and a fire can still become out of control if landowners are not prepared,” Les said.

Support from local businesses is not only a great help with the operational costs of the brigade, it can also be a valuable way of communicating with local residents.

“We are asking all businesses to help us get the message out about fire permits, fire reduction and of course letting people know the many many roles they can volunteer with the service – not just as fire fighters,” Les said.

Anyone who would like to donate goods, services or their time to Taromeo Rural Fire Brigade should contact Les on 0457-630-744.