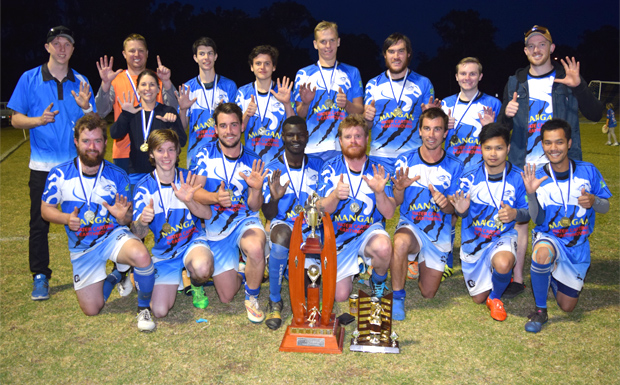 Spectators who watched the First Division Grand Final between Panthers and Gunners on Saturday were rewarded with one of the best football games seen in the South Burnett this year.

For 90 electrifying minutes, the teams threw themselves at one another with a ferocity that had to be seen to be believed.

The ball cannoned across the park at dizzying speeds as players sought any possible weakness in their opponents’ defences.

The match was played at Nanango’s Fred Kassulke Oval at the end of a long day of top-level soccer that had kicked off with the 2nd Division Grand Final between Wests and Barambah at noon and was followed by the Women’s Division clash between Nanango and Barambah two hours later.

By the time the 1st Division squads took to the park at 4:00pm, the long afternoon shadows were starting to push their fingers across the park. 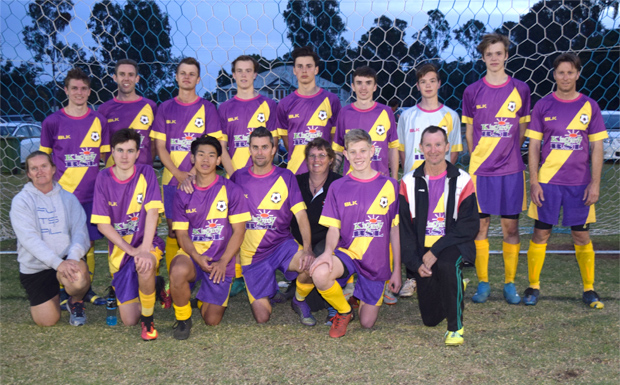 Gunners 1st Division squad were disappointed to go down to the Panthers for the third year in a row, but they had every reason to be proud of giving fans one of the most exciting games of the year

Nanango started out with the strong attacking style that is their hallmark, keeping the pressure firmly on the Purples and launching several early assaults on Gunners’ goal mouth that only narrowly failed to find the back of the net.

In the fifth minute, this tactic was rewarded when Dimas Bakini found a brief hole in Gunners’ defence and shot a blistering rocket past the goal-keeper to open the Panthers’ account.

From that moment on, the ferocity the two sides brought to the match ramped up, and it was crystal clear both were in it to win it.

Spectacular, powerful kicks saw the ball soar high … higher … and players climbing one another’s backs to head-butt it when it came back to earth.

Players also tumbled like ten-pins when their fancy footwork went wrong. On-field collisions – caused largely by paying more attention to the ball than what their opponents were doing – were as frequent as shoves, debunking the myth soccer is not a contact sport.

By roughly mid-way through the first half, Gunners seemed to have found Panthers’ measure and were starting to take the game into the big cats’ half, using tight footwork and a strategic approach to gain more possession.

But whenever control passed back to the Panthers, they took immediate advantage of it. And they were rewarded again towards the half-time whistle when Jordane Saunders found the back of Gunners’ net to give the Panthers a 2-nil lead. 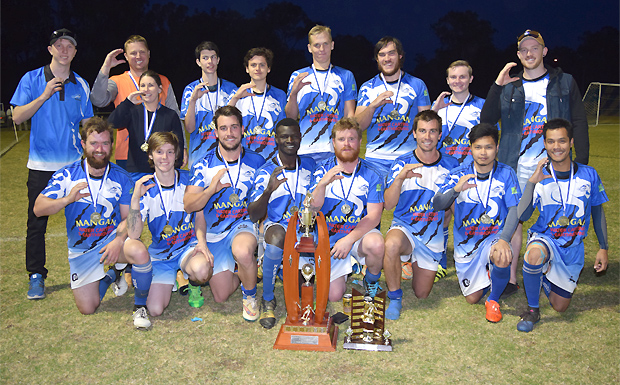 The Nanango Panthers showed their claws at the end of the game ... and during it; they'll be the team to beat again in 2018

By the time both squads returned to the park for the second half, the floodlights were lit and exhaustion had begun to set in.

Rather than dizzying aerial shots, players started to take lower kicks that were aimed more at achieving distance than height.

Now it was Gunners’ turn to take the action to the Panthers. But despite several spirited attempts to score, the Purples were let down by an inability to finish.

Roughly half-way into the second half, Panthers’ coach Lauren Mangan took the unusual step of rotating three fresh Panthers players on to the park – a risky move that could have backfired.

This may have been the case just a few minutes later when Gunner Adrian Watt finally opened the account for the Purples, returning the match to being anyone’s game.

But the Panthers quickly regrouped while Gunners desperately sought an equalizer.

Roughly 10 minutes out from the final whistle, Dimas Bakini appeared to seal the match for the Panthers when he potted another ball into the back of Gunners’ net, but he was ruled offside and the score remained 2-1.

Not long after that, Panthers were awarded a penalty kick. And when Kieran Mangan lined up to take it, many Gunners supporters feared the game was up.

But a desperate, well-timed save by the goal-keeper defeated the Panthers again, bringing many in the crowd to their feet to applaud the skilful deflection.

However, when the final whistle blew after several more edge-of-the-seat minutes, Nanango had narrowly retained the 1st Division premiership for a record sixth time in a row, and Gunners had been beaten by the big cats for the third time straight, and by the narrowest of margins.

Afterwards, at the trophy presentation ceremony, both team captains paid tributes to their opponents, as well as their own teams’ coaches, the referees and South Burnett Football officials and volunteers.

The Panthers also paid particular tribute to coach Lauren Mangan, who had guided the squad to their record-breaking sixth season win.

What was particularly remarkable, they said, was that she had done it this year despite having to weld a large number of new players into the side. 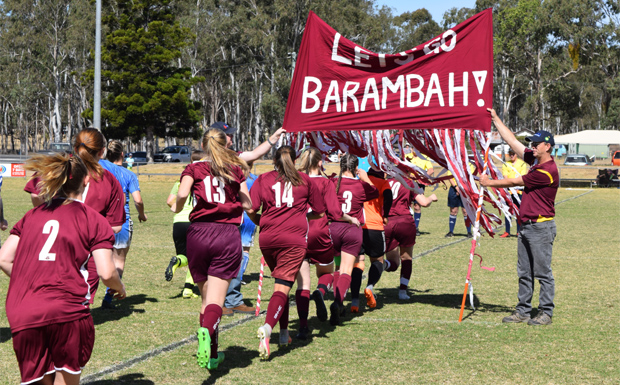 In the Women’s Division game, the lady Panthers and lady Bears faced off against one another for the second year in a row.

The Panthers’ women’s side also took in a large influx of new players this year and had to play without onfield support from veteran captain Cass Kelly for half the season, who took time out to enlarge her family.

The net result was that while the lady Panthers still came to the Grand Final with an impressive score on the league table, it wasn’t quite as impressive as last year’s tally.

Similarly, the lady Bears have had to battle with rounding up sufficient players to form a full complement for their matches at some points in the season.

As was the case last year, this meant they started out slowly.

But they had bravely battled up the league table as the season progressed, so it seemed it might be anyone’s game when play got underway.

As it turned out, Nanango’s killer instinct was in good form on Saturday, as Bree Pogany demonstrated when she caught the lady Bears with too many defenders downfield and shot a rocket past the goal-keeper early into the first half.

The lady Panthers – like their menfolk – traditionally play a strong attacking game, and while the Bears replied with a tight defence they seemed unable to dominate.

Not long afterwards, Bree Pogany repeated her goal-scoring feat to leave the Panthers two goals ahead by the half-time whistle.

Things only got worse for the lady Bears in the second half, when Raegan Campbell took advantage of an opening in front of Barambah’s goal to score her team’s third mark on the totem pole.

And when Bree Pogany completed a hat-trick a short time later, the lady Bears could see the writing on the wall.

At the trophy presentation, Barambah were clearly disappointed to lose out to the lady Panthers, but captain Elle Mollenhauer praised them for their hard work, as well as her own team-mates for putting in a top effort over the season.

Nanango’s Cass Kelly said her own team was very happy to take its second premiership after narrowly losing to Wests in 2015, and congratulated the lady Bears on another hard fought match. 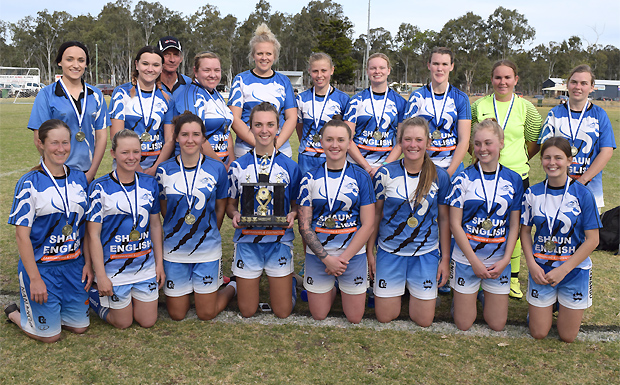 In the 2nd Division contest that began the day, Wests faced off against Barambah.

Wests had fought hard to get its berth in this year’s Grand Finals, but many felt Barambah had fought even harder.

The Bears have battled with a shortage of male players all year which has forced most of its squad to play in both the 2nd and 1st Division games.

This has meant the team has been a bit over-qualified for 2nd Division but (thanks to exhaustion) woefully inadequate in 1st Division.

But a decision to swap the 2nd and 1st Division games mid-way through the season wherever Barambah was playing an opponent gave the Bears – and spectators – a chance to finally see how well the iron men of the north could really play in the top league when all players were fresh.

The result was a number of very exciting matches which showed just how much depth the side held, despite their player shortage.

It also produced a league table this year that couldn’t really be relied on as a guide to true form.

For Wests’ part, their 2017 team was generally made up of younger players seasoned with a few very experienced greybeards, and the side visibly improved as the season progressed.

So while Barambah went into the Grand Finals as favourites, there was money for Wests as well.

In the first half, Barambah found the back of the nets twice (thanks to Duare Moses and Aiden Griffiths), while Ethan Schultz sank a rocket for Wests in reply.

But in the second half, Wests failed to catch fire and when Duare Moses caught Wests goal-keeper out wide to notch up another for the Bears, then repeated the feat not long afterwards, it was clearly all over for the Reds.

Nonetheless Caleb Jenkins refused to let his head drop and replied for Wests with a face-saving rocket of his own.

It was not enough to hold the Bears back from 4-2 victory, but certainly enough to make Wests runners-up who could hold their heads high. 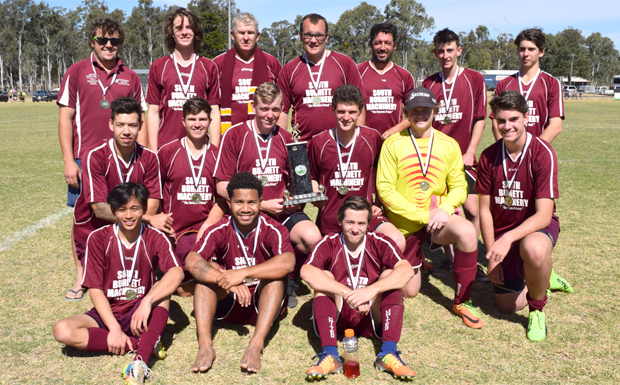 Barambah's iron men played both 1st and 2nd Division games most of the season ... their dedication to the game was rewarded with a win in the 2nd Division Grand Final

While Football South Burnett’s 2017 season has now come to an end, activities have not.

This year Football South Burnett will be holding a Presentation Dinner to present the season’s awards and acknowledge significant contributors to the region’s second most popular football code.

The dinner will be held at Taras Hall next to Nanango RSL in George Street, Nanango from 6:30pm on Friday, September 15.

Players, parents, partners, referees, administrators and fans are all welcome, and tickets – which include nibbles, a main meal and dessert – are $26 per head.

For catering purposes, RSVPs and payments need to be made to club coaches by Wednesday, September 13.

The South Burnett’s summer soccer competition will start in October.

Summer Soccer is a fun, social competition designed to help keep players fit in the off season, and it’s used as a lead-in to the Summer Soccer Sevens in February.

Players who are interested in taking part should keep their eye on Football South Burnett’s Facebook page.