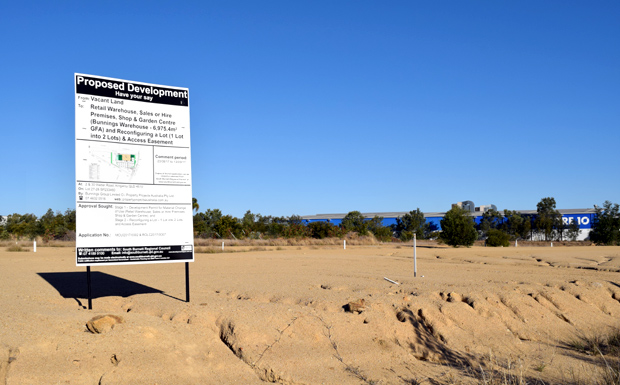 The site of a proposed new Bunnings store near the Rogers Drive business estate in Kingaroy ... some South Burnett businesses are concerned the project will destroy more jobs than it creates

Business people that southburnett.com.au spoke to on Friday to say the planned store is too large and reject claims by Bunnings that it will create 60 jobs.

Instead, they believe the store will create fewer than 25 jobs and say this will be offset by the loss of a much larger number of jobs in Kingaroy and other South Burnett towns.

They are calling on the South Burnett Regional Council to reject Bunnings’ application to build a 7600sq m store on the site of the abandoned motel development near the Rogers Drive business estate.

A letter to Council, which has also been circulated to many South Burnett businesses, also questions Bunnings’ job creation claims.

The letter has been written by a hardware chain employee who formerly worked for Bunnings in operational roles from 2010 to 2014.

“When a Bunnings store first opens, more staff are employed than required for the long-term operation of the store,” the letter states.

“In the first four weeks of a Bunnings store opening, the store will be over-staffed. The staff numbers will then be thinned out to operate the store within a tight wage budget.

“Generally speaking, staff numbers will be reduced by between 30-40 per cent during this time.

“The staff jobs that are removed are mainly the staff serving on the floor, working on the registers, or filling stock.

“Although Bunnings have claimed this new store in Kingaroy will be providing 60 jobs, I know in reality the long term number for a 7600sqm Bunnings store is closer to 35-40 people, which is really between 20-25 full-time equivalents (FTEs).

“Anything more than 25 FTEs would make the store unviable in my experience, having been part of the operational budget setting for Bunnings stores.

“The management team for all new Bunnings’ stores will be current employees brought in from other stores. This includes the Complex Manager, the Operations Manager and three Department Managers.

“A 7600sqm Bunnings store also requires a significant level of sales to be viable.

“In my experience, a store of this size needs to have an annual turnover of at least $15 million, and total hardware turnover across the South Burnett is less than $15 million now.

“I am concerned about the effect this very large hardware store will have on other local businesses in Kingaroy and the surrounding areas.

“The net result will be fewer jobs in Kingaroy and the surrounding areas.

“The Council can confirm all the above statistics by requiring Bunnings to provide it. Bunnings will have already prepared modelling for the operation of this new store, which will include staffing and sales projections.

“If Bunnings is not prepared to provide this data publicly, the Council should not be prepared to approve this application.

“I am certain this application will reduce jobs and be the nail in the coffin for many small businesses in the Kingaroy region.”

Other business people have also pointed out the impact of a Bunnings store would be felt much more widely than just general hardware sales.

Retailers selling anything from floor covering to paint and garden tools would also be affected, and so would non-competing retailers when they were hit by the loss of local jobs.

Residents could be affected in towns other than Kingaroy, too, if local shops closed and they had to drive to Kingaroy to make purchases.

One hardware store operator southburnett.com.au spoke to on Friday said she was worried for the future of her three employees.

The operator said she had been running a petition against the development in her store this week and already had eight pages of signatures.

Another store owner said they had been told by local tradies they would not support Bunnings if it opened because doing that would destroy local jobs.

“Bunnings aren’t coming to this area to compete, which would be fine. They’re coming to the South Burnett to wipe out all the competition and get a monopoly stranglehold on the market,” the businessman said.

“If they wanted to build a store that was right-sized for this region, that would be fine.

“But the monster they’re proposing is designed to dominate the market, and the Council should either reject this development outright or condition it so the project is right-sized.”

Some members of the Kingaroy Chamber Of Commerce and Industry are also circulating the documents.

The deadline for lodging public objections to the Bunnings development with the South Burnett Regional Council will close next Wednesday, September 13.

12 Responses to Bunnings? Locals Urged To Just Say No