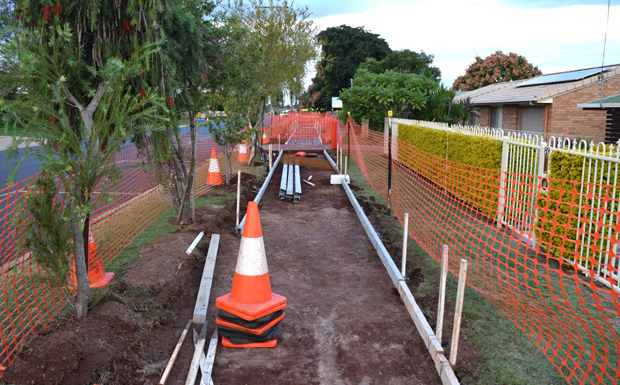 A new footpath in Ivy Street, Kingaroy is one of 38 projects being funded by the Works For Queensland program; the South Burnett and Cherbourg councils will now be able to apply for more funding after the State Government decided to extend the W4Q program for another two years

Mayor Campbell said on Tuesday afternoon the extension of the Works For Queensland program was good news, and he was confident the South Burnett could make productive use of any additional funding on offer.

The State Government has now put another $200 million on the table for Queensland councils over two years.

The funding is for job-creating projects in regional parts of the State.

“This initiative is designed to get local people into local jobs, boosting the regional economy immediately where it is needed the most.

“Earlier this year we successfully rolled out $200 million in projects and mayors across the State embraced the program, telling everyone about the positive impact it is having on their regional communities and urging me to continue this program.

“We have listened and are delivering a further $200 million over the next two years to regional Queensland councils for job-creating community infrastructure projects.”

Councils will soon be notified of their allocation in the first $100 million set aside for the 2017-18 financial year in order to start compiling a list of possible projects.