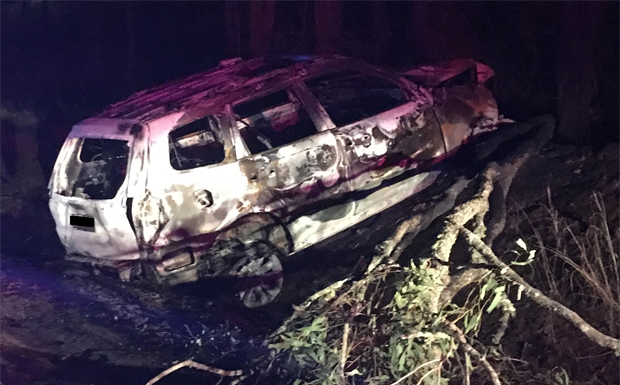 Fire crews extinguished the man's burning vehicle after he was pulled from the wreck (Photo: RACQ LifeFlight)

An elderly man, pulled from his burning car near Mt Binga on Thursday night by army personnel, has died in hospital.

An army helicopter, on a night-vision exercise from Oakey base, spotted the burning vehicle about 6:45pm.

They landed nearby to assist the critically injured 85-year-old driver, whose car had run off a winding dirt road, hit a tree and burst into flames.

The incident occurred near the intersection of Middleton Road and Pierces Creek Road, just east of Mt Binga National Park.

Officer Cadet Ingrid Dylan and Captain Gary Hamilton told local media the man was hanging out the passenger window of the vehicle, which was well alight, when they arrived at the scene.

The RACQ LifeFlight’s Toowoomba helicopter arrived about 8:00pm but had difficulty landing nearby due to the rough terrain.

A LifeFlight critical care doctor and QAS flight paramedic climbed through a barbed wire fence and carried their equipment 500 metres along a dirt road to reach the badly burned man.

When the crews arrived, he was in a very serious condition with burns to about 50 per cent of his body.  They worked to stabilise him before transferring him to a road ambulance for a short trip to a nearby paddock where the helicopter had relocated because it had road access.

The man was airlifted to the Royal Brisbane and Women’s Hospital in a critical condition.

LifeFlight’s Toowoomba base manager Andrew Riches praised the Army trainee pilot who pulled the man from the burning wreckage.

“It was an incredible rescue pulling him out like that. She was very, very brave,” Mr Riches said. 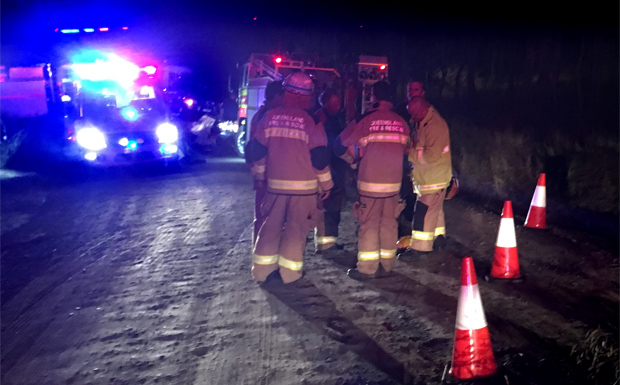 Emergency services at the scene of the fatal crash, east of Mt Binga (Photo: RACQ LifeFlight) 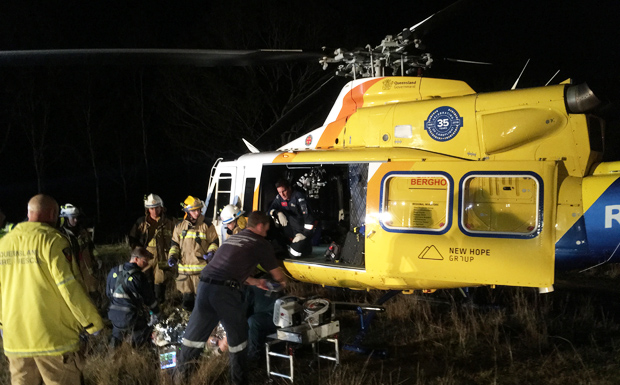 The critically injured man is transferred to the medevac helicopter (Photo: RACQ LifeFlight)