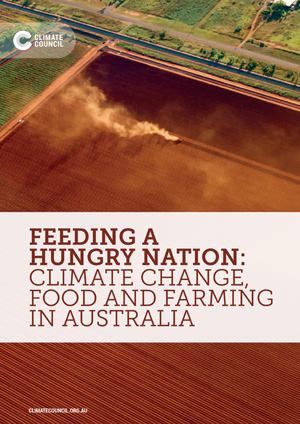 A Climate Council report claims the price, quality and seasonality of Australia’s food is increasingly being affected by climate change,  and future food security is under threat.

The Climate Council’s Professor Lesley Hughes said Australia’s agricultural competitiveness in many markets would be challenged by a warming climate and changing weather patterns.

“Australia is one of the most vulnerable developed countries in the world to climate change impacts,” she said.

“This is already posing very significant challenges to food production. Food prices will continue to go up, the quality of food could be compromised and the seasonality of food could change as the climate continues to warm and weather patterns become more unpredictable.”

Climate Council Chief Councillor Prof Tim Flannery said there was no room for complacency in planning for future food security.

“Large parts of Australia are currently in drought, including a record 80 per cent of Queensland,” he said.

“We are watching the realities of a warming world unfold before our eyes and the impacts on everyday Australian households as food prices and food availability become more volatile and affect the economies and social fabric of those communities that rely on agricultural production.

“Australian farmers have demonstrated great resilience in the face of harsh physical and social challenges. But if the present rate of climate change continues, there will be many challenges to which adaptation is simply not possible.”