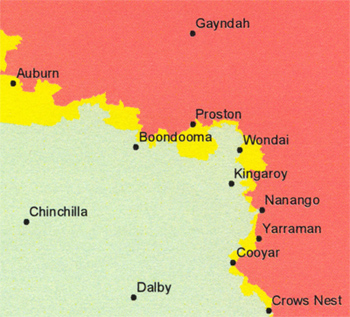 Member for Nanango and Shadow Agriculture Minister Deb Frecklington has called a meeting next week to gather feedback from local cattle producers on the future management of ticks in the South Burnett.

AgForce has called for the elimination of the “control” zone between ticky and tick-free areas to simplify tick control.

However, members of the Kingaroy Wondai Proston Tick Eradication Committee have threatened a class action if the State Government moved the tick line southwards during its current biosecurity review.

South Burnett producers are pressing for more capacity in the Department to enforce the current tick-free zone and concessions for farmers whose properties straddle different tick areas.

“In Parliament on August 21, I had the opportunity to question the Minister for Agriculture, Bill Byrne during the Agriculture and Environment Committee Budget Estimates hearings,” Mrs Frecklington said.

“Estimates allows an in-depth analysis of issues relating to each State Government department, and in respect to the Department of Agriculture and Fisheries, provided me with a chance to ask important questions in relation to funding, staffing and policy decisions which will impact primary producers over the next year.

“On behalf of the region’s cattle producers, I asked the Minister to confirm his intentions for the support and maintenance of the cattle tick line through front-line staff, resourcing, and inspections which are needed to maintain industry confidence in the management of ticks in Queensland.

“Importantly, Mr Byrne acknowledged that there is no inclination from the current government to step away from the effective management of cattle ticks, however, he did state that under the new legislation, there will be a variety of more flexible and responsive ways of management, with a more equitable sharing of responsibility.

“This is a topic which has been debated for many, many years, and I know producers along the line need better answers than what they are currently getting.

“To gather feedback to take to the Minister, I will be holding a Cattle Tick Line meeting in Kingaroy on Tuesday, September 8.