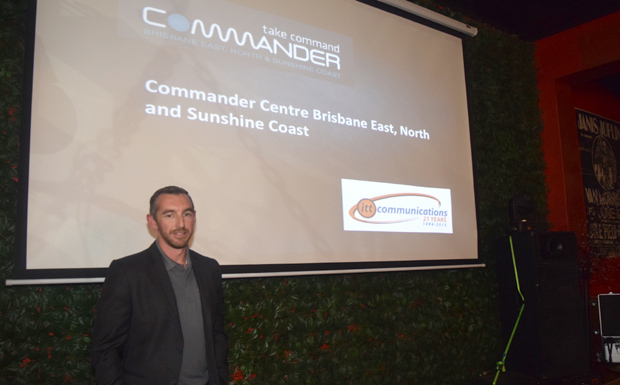 David Land from Commander Centre warned KCCI members on Monday night that once the NBN arrives in the South Burnett, the copper wire network will eventually be shut down

The arrival of the NBN in the South Burnett may mean faster broadband for residents but it will also mean the end of the copper wire network … and this will probably occur within the next five years.

Residents and businesses who don’t swap over to the NBN by the time of the shut-down will wake up one day to find they have no landline phones or Internet.

This grim message was given to KCCI members at the group’s latest Meet’n’Greet at Kingaroy’s Commercial Hotel on Monday night.

David Land, the Sales Manager from Commander Centre Brisbane East, North and Sunshine Coast, was attending the meeting to inform KCCI members about the NBN and the way his own company’s products had evolved to meet the opportunities the NBN would open up.

Mr Land said the NBN was an extraordinary network that would probably revolutionise day-to-day life, particularly in regional and rural areas.

The Federal Government-owned NBN Corporation was rolling the network out around the nation using a mix of fibre-optic cables, fixed wireless towers and satellite systems.

Most of the South Burnett is expected to be covered by fixed wireless towers by the end of this year, and homes or businesses which aren’t within line-of-sight of a tower will soon be able to access new communication satellites that are being launched to “fill in the blanks”.

But in all of this, the message that the arrival of the NBN will ultimately mean the demise of the old copper wire phone network is being overlooked or forgotten, he said.

“It’s very much like the switch from analog to digital TV,” Mr Land said.

“One day it was there, the next day it was gone for good. So this is something businesses should be aware of and take into consideration when they draw up their plans.”

Mr Land said consumers would have plenty of advance warning the copper wire system in their region was about to shut down, and plenty of time to select an NBN provider.

“It will be a lot like the analog-to-digital TV switch-over,” he said.

“You’ll hear that the copper network is going to be switched off anything between 12 and 18 months beforehand.”

The Mayor said he had also recently begun to consider that the Council should look at playing a more dominant role in the future of the former Pound Street depot.

He said the Pound Street site, when it was sold, would command a multi-million dollar price tag and the funds it generated could then be used to upgrade Kingaroy’s CBD.

However, the traditional approach of Council simply selling it to a developer posed problems.

“If we take that view, then we have no real control over the land once a developer owns it,” he said.

“They might build a shopping centre or something else that really isn’t compatible with a long-term vision of where we want Kingaroy to be in the future.”

The Mayor said he had begun to think it might be smarter to look at all options and one of those might be for Council to take a more active approach about the future of this block of land.

This, though, would likely be a task for a future Mayor and Council, since the region would not get the best possible price for the block until there was a sustained upturn in the local property market.

The first two – one on marketing and another on business manangement – had recently been delivered by qualified TAFE instructors and were well-attended, she said.

The four remaining seminars would cover Financial Management, Customer Service, E-Marketing and Human Relations and would be held at the Kingaroy TAFE College between 5:45pm and 7:00pm on September 2, 8, 14 and 17.

They were open to any South Burnett business, she said.

Sharyn then encouraged KCCI members to nominate their businesses in this year’s Awards, and asked last year’s “Business Of The Year” award winner, Jacqui Irwin from Ollies Mower Service, to talk about her own experience.

Jacqui told the meeting she and her husband Brett had entered the awards simply because they thought the process might help them improve their business.

“We never expected to win and were pretty surprised when we did,” she said.

She said the application process forced business owners to step back and think about their business, and she found it was a very beneficial exercise.

“You often hear that you should be working on your business rather than in it, but that’s easier said than done.”

She said her experience was that applying for the Awards helped business owners get the necessary change of perspective, and she highly recommended it for that reason.

The KCCI’s next Meet’n’Greet will be held on October 12 at a venue yet to be decided.

Any KCCI member who’d like to nominate their business to host the next get-together is welcome to contact KCCI secretary Paula Greenwood on 0427-622-918 or by emailing her.