Glimmer Of Hope For Wondai Cadets 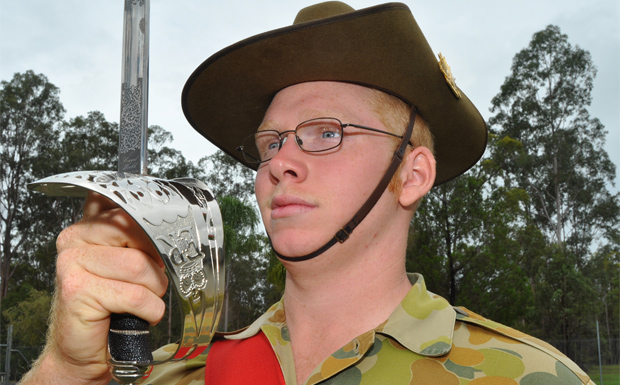 Sgt Jason Stephens with the ceremonial infantry sword presented to the 135 Australian Cadet Unit in February last year; there is now some hope Wondai's cadet unit may not be mothballed

The Wondai community proved at the weekend that it wants to keep the local Army Cadet Unit operating, but the ultimate decision still rests with the military authorities.

More than 30 local residents attended an emergency meeting held on Sunday in a last-ditch bid to keep the unit from being mothballed.

“We had 18 adults volunteer a commitment to the unit,” the retiring officer-in-charge, Captain (AAC) Peter Schneidewin, said.

“It looks promising that the key positions of Officer Commanding, Training Officer, Administration Officer and Logistics Officer may have suitable applicants.”

Late last month, it appeared likely that cadets from Wondai would be offered the opportunity to join an enlarged Nanango cadet unit while the hunt for a new commanding officer and volunteers for Wondai continued.

The proposal to mothball Wondai’s 135ACU was put to a meeting in Kingaroy which was chaired by Lieutenent-Colonel (AAC) Leigh Eagle from Brisbane.

Lieut-Col (AAC) Eagle said she would take this submission to her superiors.

However Capt Schneidewin said he had approached Lieut-Col Eagle in the wake of Sunday’s meeting.

“I have sent a proposal to Lieut-Col (AAC) Eagle this evening outlining these results and requesting that the unit remain open,” he said.

“I now wait for her to review the information and give us a decision as to whether or not the unit will avoid mothballing.”

One Response to Glimmer Of Hope For Wondai Cadets