A controversial 116-lot relocatable home park at Taabinga Downs Estate in Kingaroy was given the go-ahead this afternoon by the South Burnett Regional Council.

Councillors voted 5-2 to rescind a motion passed at the Council’s March meeting rejecting the development.

Councillors then voted 4-3 on a second motion to give the development the go-ahead, subject to the conditions hammered out between the developer and council staff over the past two years.

The Council called the special meeting to debate the issue after being advised by Taabinga Downs’ developers they intended to take Council to the Planning and Environment Court to contest the March 19 decision.

The SBRC received its own legal advice on the matter and at the start of the meeting – before any discussion on either motion had taken place – proceedings were closed to the public while this advice was conveyed by the Mayor to his fellow Councillors.

When the meeting reopened about five minutes later, Cr Barry Green moved the rescission motion which was seconded by Deputy Mayor Keith Campbell.

Cr Green said he was moving the motion because he thought it was a “procedural matter” but had no other comment to make.

Cr Damien Tessmann, who opposed the development at the March 19 meeting, then rose to speak, saying that the concerns he had expressed at the March meeting remained.

In a lengthy prepared speech, Cr Tessmann questioned the viability of the development and its appropriateness for the area.

He also said he’d had a number of representations from local real estate agents, motel owners and people who were involved in the building industry who were all against the development proceeding.

“What do the developers know that all these people don’t?” he asked

Cr Ros Heit said she accepted Cr Green hadn’t taken his decision to move the rescission motion lightly, and was happy to revisit the issue.

The vote on the rescission motion was then taken, and passed 5-2 with Cr Damien Tessmann and Cr Kathy Duff opposed.

Mayor Wayne Kratzmann said the effect of this was that the original decision on the development proposal was now “back on the table”.

The meeting then moved on to the second motion, which was to accept the Council officers’ original recommendation to approve the development.

This motion was moved by Cr Keith Campbell and seconded by Cr Barry Green.

Cr Green, who had been one of the four councillors who rejected the development on March 19, said his main reason for changing his view was the legal advice Council had received.

This advice suggested that unless the Council could prove the development application breached the Planning Scheme, its case was effectively unwinnable.

Cr Green said if the Council elected to take the matter to court, it would be unable to call on its own officers to testify and would instead need to hire external planning consultants to make its case.

This would be “difficult and very expensive”, Cr Green said.

“How could we justify to ratepayers that Council was putting this matter to court when we’d already received advice the case was unwinnable?” he asked.

After further lengthy discussion the motion was passed 4-3, with Crs Tessmann, Duff and Heit opposed.

Update: The full text of arguments made by Cr Damien Tessmann against allowing the development to proceed and Cr Keith Campbell in favour of allowing it to get the go-ahead can be found here: Taabinga Estate: The Arguments. 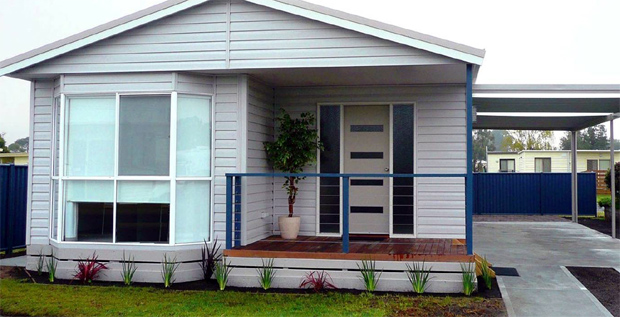 An example of the type of relocatable homes that could be erected in the Taabinga Estate development (Photo: SBRC)