Chorale Sings In The Festive Season 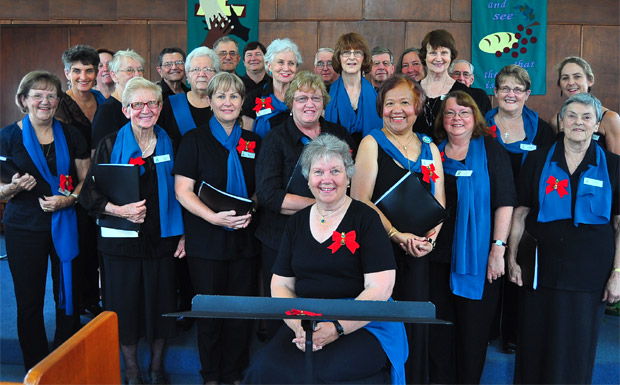 The South Burnett Chorale heralded the festive season at the weekend with the first round of their popular annual Christmas Charity Concerts – one at Nanango’s Uniting Church in Gipps Street on Sunday afternoon, and a second at Kingaroy’s Church Of Christ Hall later that evening.

The Chorale performs Christmas concerts in late November and early December every year.

They’ve been doing it for so long that for many local residents the concerts signal the official start of the South Burnett’s Christmas celebrations.

Every year the group creates a new concert for Christmas, and then holds four concert performances over two weekends: one each at Nanango, Kingaroy, Wondai and Murgon.

The Murgon performance is always held at the Castra Retirement Home, but different churches are used each year as venues for the other three events.

They’re known as Christmas Charity Concerts because all monies raised are given to that concert’s host to be used for whatever charitable purpose they choose.

This year’s concert series is entitled “The Nativity Of Christ Cantata” and each performance is about 75 minutes long.

The concert features a mix of sacred and popular songs and is accompanied by either afternoon tea or light supper.

Members of the amateur choral society meet weekly during the year for practice and to prepare for their public performances.

This year they performed “A Pleasant Sunday Afternoon Concert” at Kingaroy’s Uniting Church Hall in June; then “A Choral Medley” at Taabinga Homestead in August; and appeared at the Kingaroy Town Hall forecourt in September as part of Tractor Tattoo’s massed ensemble of choirs.

Their two final Christmas performances for 2012 will be held on Sunday, December 2: 2:00pm at Castra Retirement Home,  2 Coopers Street, Murgon; and then at 6:00pm at the St John the Baptist Catholic Church at 60 Bramston Street, Wondai.

Admission to either concert is $8 for for adults; children under 12 are admitted free.

Note: During the year the South Burnett Chorale meets for practice sessions every Tuesday evening at the Church of Christ Hall on the corner of Haly and Burnett streets, Kingaroy. The Chorale is a non-denominational group open to men and women and the only requirement is a love of singing. You can obtain more details by phoning Di on (07) 4162-1647.