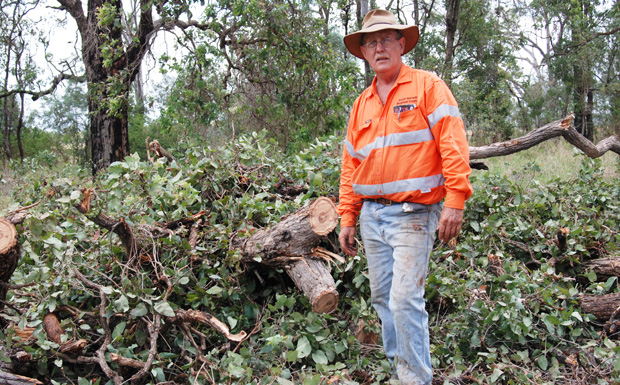 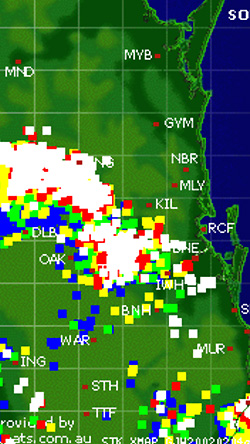 The storm crosses the South Burnett about 8:00pm on Saturday

A line of storms that swept through the South Burnett on Saturday night left a trail of destruction in their wake and about 5000 properties without power.

Some of the worst hit areas were west of Kingaroy where literally hundreds of trees were ripped out of the ground along the Memerambi-Gordonbrook and Chinchilla-Wondai roads.

With thousands of branches strewn across roads, travel became very dangerous but fortunately only minor road incidents were reported.

The sheer number of trees felled in the Wondai region prompted a rare safety warning issued by Queensland police at 10:00pm on Saturday.

A woman driving on the Memerambi-Gordonbrook Road on Saturday night found herself stranded when a tree fell across the road. Deciding to turn back, she discovered more trees had fallen behind her, effectively trapping her vehicle.

Family members and council workers came to her aid.

The storms also brought heavy – and often horizontal – rain with totals between 50mm and 70mm being recorded, causing localised flooding and some temporary road closures.

Hail also fell in some northern parts, although the South Burnett was spared the softball-sized hail reported to have fallen between Dalby and Toowoomba.

SES volunteers were called out to a couple of properties in the Kingaroy area which suffered minor storm damage.

Blackouts caused by downed powerlines and branches across wires plunged many areas into darkness for varying periods.

The final performance of the Nanango Theatre Company’s production “Pilots Of The Purple Twilight” in Nanango was just one of the events affected.

By midnight on Sunday, Ergon Energy crews had restored power to most South Burnett homes although there were still properties near Kingaroy, Chahpingah and Durong South affected by outages.

UPDATE November 19: About 60 Ergon Energy customers in the South Burnett remained without power this morning, mainly in difficult to access areas around the Great Dividing Range. 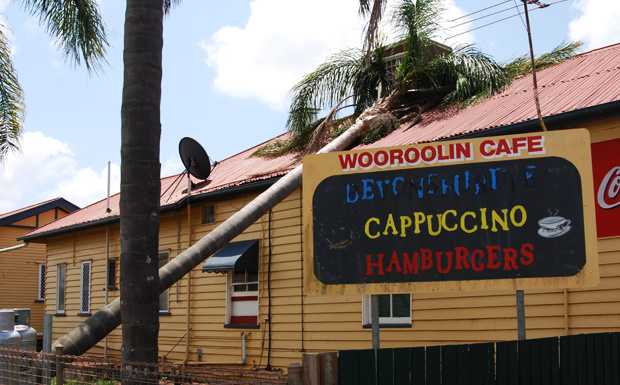 A palm tree rests across the roof of the Wooroolin Cafe 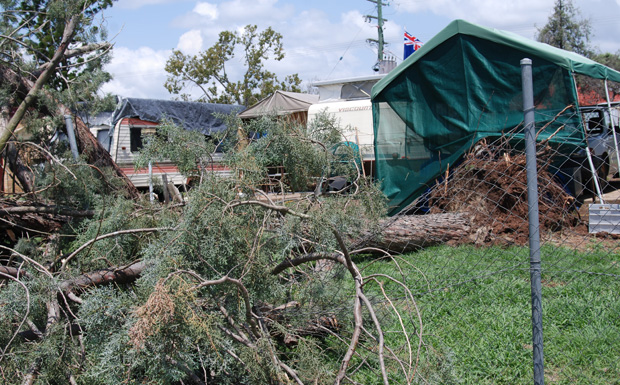