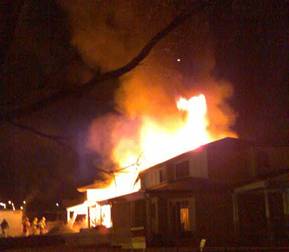 Fire destroyed a block of units in Deception Bay in 2007

A 32-year-old Kingaroy man has been charged over a fire that destroyed a block of units in Deception Bay in 2007.

A 32-year-old Margate woman was charged with accessory after the fact in relation to the arson.

A Lipscombe Road unit block was engulfed in flames on August 1, 2007. The fire totally destroyed the building which was under construction at the time.

The four are expected to appear at Redcliffe Magistrates Court on May 14.

The arrests are as a result of an ongoing operation named “Juliet Orion”.