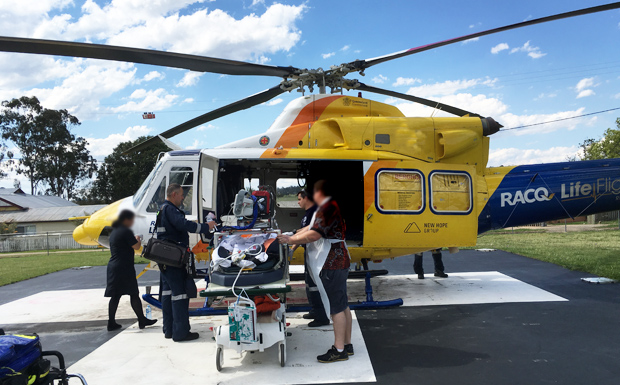 The Bunya Mountains community will lobby for the construction of a helipad on the mountains
(Photo: RACQ LifeFlight)

The Bunya Mountains Community Association (BMCAI) plans to lobby for the construction of a marked helipad on the mountains in the wake of a recent accident in which a resident was injured.

The man was repairing the roof of his shed when the roof gave way and fell through on to the floor.

A local nurse provided first aid until an ambulance arrived from Kingaroy.

A helicopter was also despatched to airlift the injured man.

The BMCAI said the accident had highlighted some issues:

“The Telstra mobile signal is appalling (not new news, I know) and caused us many issues on the day responding to the situation and relaying vital life saving information,” a spokesperson said.

“For example, there was no signal at the accident site but 50 metres away, the signal was reasonable, so this resulted in first responders and paramedics and medievac doctor having to leave the patient to relay messages to QAS despatch services.

“BMCAI will continue to lobby for improved telecommunication services.

“Bunya Mountains must (also) have a helipad. This life-threatening situation clearly demonstrates that need.

“By the time the helicopter lifted off in this scenario, it was dark. It is not just a safe spot to land that is needed, but an established marked helipad that can be identified in all circumstances. BMCAI will lobby for a helipad for the Bunya Mountains.”

The injured man is back at home, recuperating slowly but is expected to make a full recovery over time.