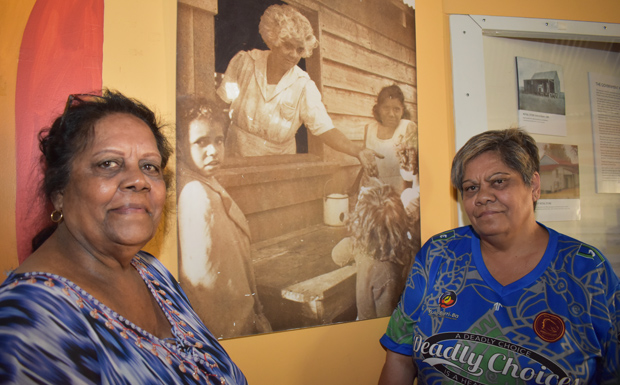 Sandra Morgan and Jeanette Brown with a photo of their grandmother, Nancy Chambers, which is on display at The Ration Shed Museum in Cherbourg

She didn’t speak about them which led to the family fearing they may have been the victims of a massacre, which were sadly too common in the early years of the 20th century in western Queensland.

But research undertaken by her granddaughters and great-granddaughter has uncovered the truth: Maryann “Yonga” Watson and Billy “Kubana” Watson both died in 1919 at Winton, victims of the Spanish Flu epidemic which swept across Australia post-World War I.

Nancy was born on an outback station near Winton in 1883.

As a young girl, she was sent to Wooloowin Girls Home in Brisbane.

“She never got to see her parents again,” granddaughter and historian Lesley Williams told southburnett.com.au

Nancy did get to meet one sibling, Zoe, but then Zoe was shipped to Fantome Island, off Townsville, and Nancy didn’t see her again, either.

From Wooloowin, Nancy was sent to Fraser Island and Yarrabah, before finally ending up in Cherbourg.

A photo on the wall of The Ration Shed Museum shows Nancy as an older woman serving fellow Cherbourg residents at the then-mission’s soup kitchen in the late 1940s / early 1950s.

Cherbourg was hit very badly when the Spanish Flu came to Australia.

Nancy lost a son, Stephen, to the disease; Stephen is believed to be buried in the Spanish flu mass grave at Cherbourg.

What Nancy didn’t know was that her parents had also been struck down by the deadly flu and were being treated at the same time in a tent hospital at Winton.

When they finally succumbed – Yonga in June, and Kubana in August – they were buried in separate graves in the Winton Cemetery alongside other victims of the pandemic.

Another one of Nancy’s granddaughters, Jeanette Brown, said it had been a relief to discover her great-grandparents had been treated with respect and had received a proper burial.

Jeanette, and sisters Sandra Morgan, Lesley Williams and Grace Bond, along with Lesley’s daughter Tammy, travelled to Winton earlier this year to track down the two graves and pay respects to their long lost relations.

Small crosses and flowers were placed on the graves, but the family hopes to replace these markers with headstones.

“It’s given the family comfort to know they are not buried in an unmarked grave, that they were given a proper burial in a mainstream cemetery and not part of a massacre,” Jeanette said.

The group also located the graves of other Elders from the region buried nearby.

The discoveries have given the family a stronger sense of country, a link to a place to which they are connected through their maternal ancestors, the Guwa (Koa) people. 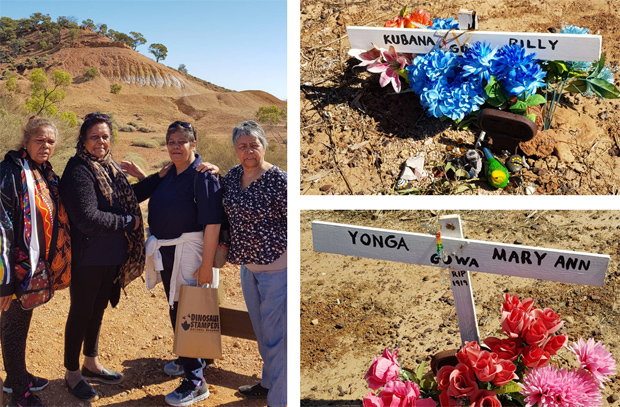