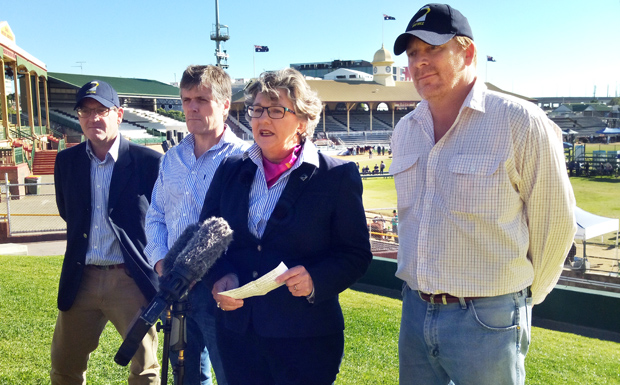 AgForce has taken the opportunity of the annual “bush coming to the city” week to invite metropolitan residents to “Stand Up For Queensland”.

The agricultural lobby group has also unveiled a new membership option for all young Queenslanders interested in agriculture.

The aim is to bridge the perceived divide between the city and the country which has been amplified recently by “farm invasions” by city-based animal rights activists.

The “Stand Up For Queensland” campaign will be promoted in the media with the hashtag #standupforqldag.

Mrs Somerset said it was “a movement to engage people from metropolitan areas”.

“People in rural and regional Queensland are facing incredible hardship, but they feel undeniable gratitude for the outpouring of support they’ve already received from their brothers and sisters in metropolitan areas over the past 12 months or more,” she said.

“We should all remember there are some countries, like Singapore, that don’t have enough land to grow their own produce and instead import almost all their food from abroad.

“Even the most militant animal activist couldn’t survive without agriculture growing their mung beans and chickpeas and wheat.

“Our new Country Connection membership … welcomes especially young people from metropolitan areas who want to connect more with what’s happening in the bush.

“The truth is though, no matter what we do, there will always be some who focus on the apparent differences in what are their selfish efforts to fuel their own agendas, rather than looking to the much wider, much greater good.

“That’s why this today, at Ekka, is only the first step in a much longer journey to unite all of us, no matter who you are or where you’re from.

“In the end, we all need agriculture to survive.”

Mrs Somerset said that “first and foremost” Agforce existed for its members.

“Limited water, lack of connectivity, poor roads, a shortage of, or in some cases no, teachers, police and doctors.

“I heard a story from an AgForce member just yesterday who runs a property less than two hours from Brisbane, and the local petrol station has closed. Now, if you want to fill up, you have to drive almost 30 minutes each way.

“That’s tough, especially on the elderly, disabled and other vulnerable people in the area.

“That’s why we’re doing this, to raise awareness about what’s going on, and what better time and place than during these ten days of Ekka, one of the only times of the year when people from the country come to the city to speak about what it is they do, and those from the city can engage with it.”

She invited city residents to come out and visit rural and regional Queensland.

“There are 51 other weeks in the year when people from urban areas can get out to the regions and say g’day, see for themselves what’s happening, make up their own minds,” she said.