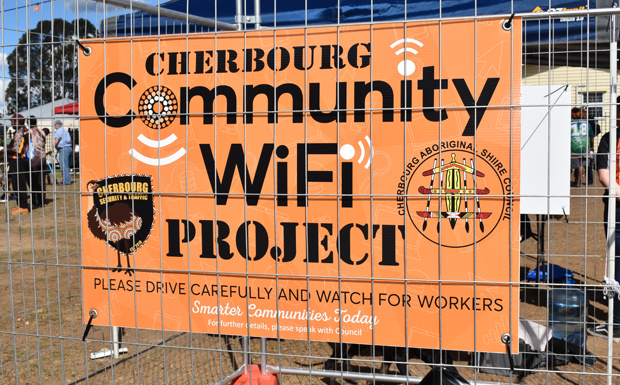 One of the Kingaroy Security construction spots now scattered around Cherbourg

A high-tech CCTV security system being installed around Cherbourg will have a bonus spin-off for local residents … wi-fi coverage for the town.

He said there had been a couple of minor setbacks in planning the cabling for the system but these had now been overcome.

“That’s now given us the opportunity to provide an additional facility which will be community wi-fi,” Steve said.

“With the upgrades that we’ve done and after a very brief discussion with Council, Council has agreed and funded the additional community wi-fi element to the system.

“That will provide all the residents of Cherbourg, all the government agencies, schools and health with a stable wi-fi platform, which will be fantastic.”

He said the network would be looped through the powered fibre optic cable that his company was installing and would come back to a controller at the library before being linked to the NBN.

“The tower at Council has about a 900 metre coverage. It will broadcast wi-fi right across the community,” Steve said.

He said the poles that were being put in place for the security system provided a wonderful opportunity to create a network of sub-stations for the wi-fi coverage.

“That will give everybody access to stable and reliable internet,” he said.

“That’s a great outcome for agencies and all members of the community.”

Steve said the cost for individual users was still being decided however the possibilities that Council could consider included periods of free access, a small payment for longer periods or the cost could be assessed on the quantity of data downloaded.

“We have simply provided the functionality and Council will make decisions in due course about how they control that,” he said.

“Using fibre optic opens up a whole raft of opportunities for the expansion of these systems.”

These could include the eventual development of a “heritage” trail.

Steve said at the conclusion of the project, Cherbourg would have one of the most advanced systems in the world, with not only a great camera system to provide community safety but also wi-fi which could be extended.

“It is really Council that is driving the delivery of these projects and it is getting extraordinary value for money out of all of these items for community benefit,” he said.

In February, Member for Wide Bay Llew O’Brien announced a $987,000 grant to install 54 cameras at strategic locations throughout Cherbourg.

The money came from Round 3 of the Federal Government’s $30 million Safer Communities Fund, created from the proceeds of crime.

As part of an initiative to be known as “Cherbourg Security and Traffic Management”, Kingaroy Security will also be organising for 10-12 candidates to undertake comprehensive training to gain security officer licences.

“Then we will deliver a community safety element to Cherbourg by licensed security officers who come either from Cherbourg or have deep links into the Cherbourg community,” Steve said.

“Once again, this is an initiative which has been fully backed by Council … it will retain about $300,000 of wages in the community. This is by community, for community.”