Punters Throw Caution To The Winds 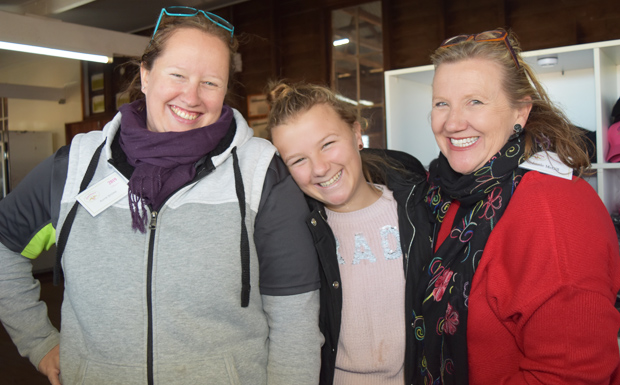 Working hard – and rugged up – in the merchandise shop were Katie Stone and Emily and Annie McGill, from Ironpot 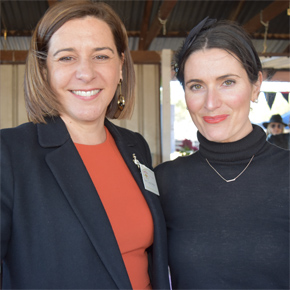 Member for Nanango Deb Frecklington and Rosanna Allan, from Bell, were volunteering at the wine bar

Organisers and racegoers were blown away by this year’s Burrandowan Races … quite literally.

The same unseasonal winds that forced the cancellation of the Maidenwell Country Muster on Saturday also whipped across the Burrandowan racetrack, stirring up dust.

Some racegoers were wise and rugged up; others didn’t seem to mind (possibly for the same reason the British Navy used to issue sailors with a daily tot of rum).

However, the nippy day didn’t stop people having fun and didn’t seem to affect crowd numbers.

Burrandowan Picnic Race Club secretary Trish Christie said although the weather was miserable at times, the day had gone off really well.

The traditional clay pigeon shotgun shoot in the morning wasn’t affected by the wind and was well-attended.

Likewise, plenty of punters stayed around to enjoy the firepit barbecue on Saturday night and the live music from local band RySa, who played on the verandah of the historic Chahpingah Hall.

The new-look organising committee stuck with the tried-and-true favourites, including grazing boxes and cheese platters, but added in some more picnic tables on the grass beside the wine tent.

The portable grandstands were also pushed back against the undercover betting ring, providing more room trackside.

The Chahpingah Cafe was kept busy serving up light lunches, while Kingaroy Lions and Taabinga Rotary worked the barbecues.

Burrandowan has a rich history dating back to May 13, 1922, and is packed with heaps of traditions.

According to South Burnett Deputy Mayor Kathy Duff, one of these is its match-making prowess.

Many a young man has found his future bride at the Burrandowan Racetrack, including her grandfather John Duff at the very first Burrandowan meeting.

At that time, Burrandowan featured a Ladies Bracelet Race where every entrant had to be nominated in the name of a woman.

John asked a woman he met at the track, Dorothea Evans, whether he could nominate his horse, Thunderclap, in her name.

She agreed, and it won.

After the race, John was presented with a ladies bracelet as the prize, which he promptly gave to Dorothea.

Four years later, they were married.

Cr Duff has been keeping the tradition alive by presenting a handmade silver bracelet every year to the winner of the Burrandowan Cup.

However, she hopes to revive the tradition of “lady” nominations for the Centenary Burrandowan meeting in 2022.

This year it was Toowoomba apprentice jockey Joshua Morrow’s turn to be presented with the silver bracelet by Cr Duff after he romped home in Race 5 aboard The Irons.

While the racegoers were having fun on the grass, things were a bit more hectic out on the track.

Scratchings were the order of the day with jockeys unavailable through injury or not making it to the course on time.

Taminick Gap was scratched in Race 1 when jockey Scott Sweedman could not make it to Burrandowan due to transport difficulties.

Brat Attack was a late scratching in Race 2 when its float broke down on the way.

In Race 3, there was no jockey available for For The Boys, and Nerina was a late scratching on veterinary advice after suffering an injury in the float on the way to Burrandowan. This provided an opportunity for emergency, Ringo’s Magic, to romp home in third spot.

There were also no jockeys available for Scrivano or Rebel Saga in Race 4. 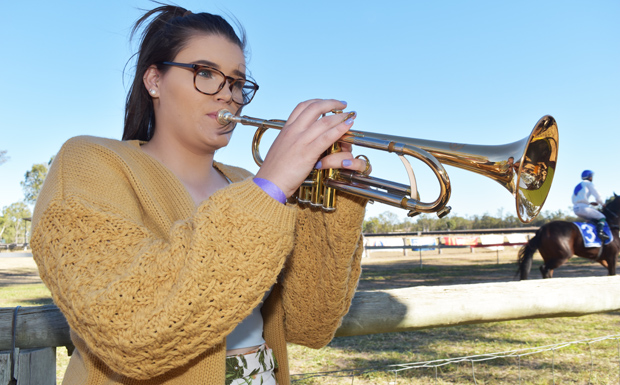 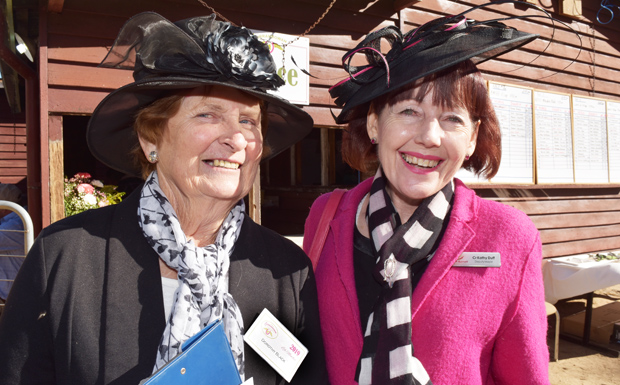 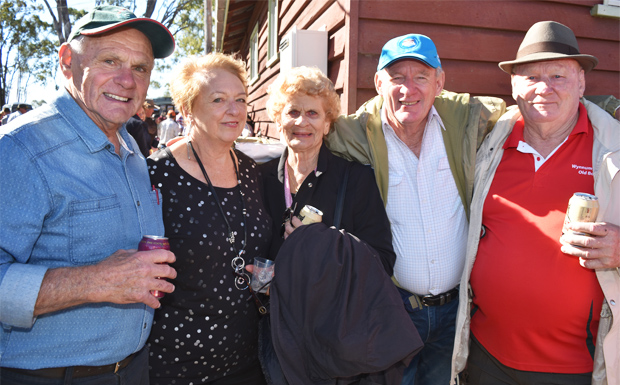 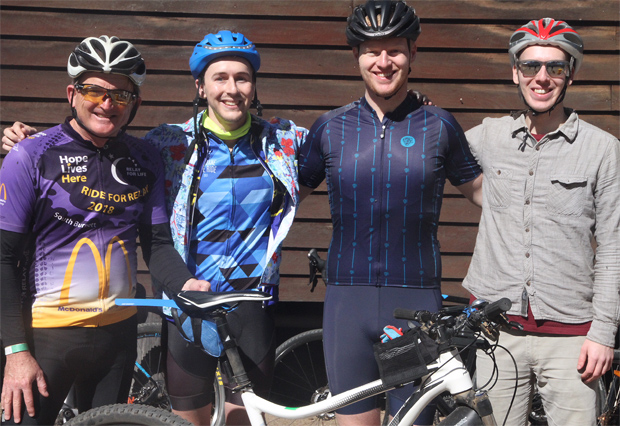 Burrandowan was a great excuse for a bunch of cyclists to go on a long ride and raise awareness about depression and anxiety; the Kingaroy-to-Burrandowan Cycle Challenge raised funds for Beyond Blue … from left, Jason Wyeth, from Tingoora, with ride organiser John Bryant, from Maclean in NSW , and James and William Isdale, from Brisbane. John organised the ride in memory of his late father, Andrew Bryant (Photo: Ross Stanley) 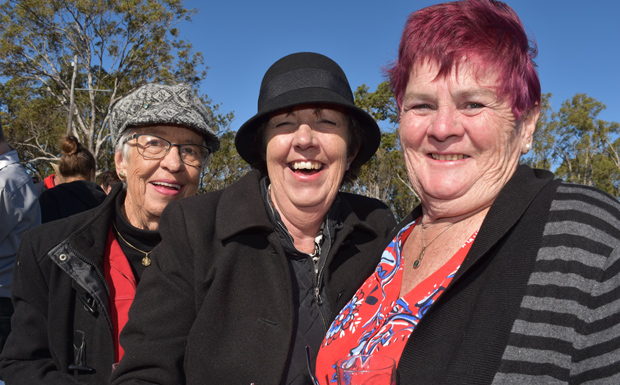 Burrandowan regulars Beris McHugh and Joanne Smith, from Woodford, and Bett Clifford, Brisbane, like to find a spot close to the winning post 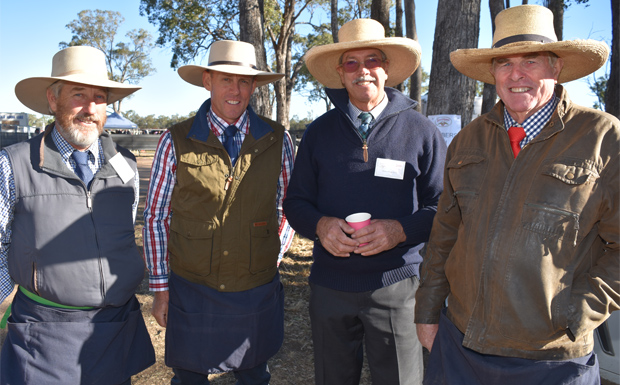 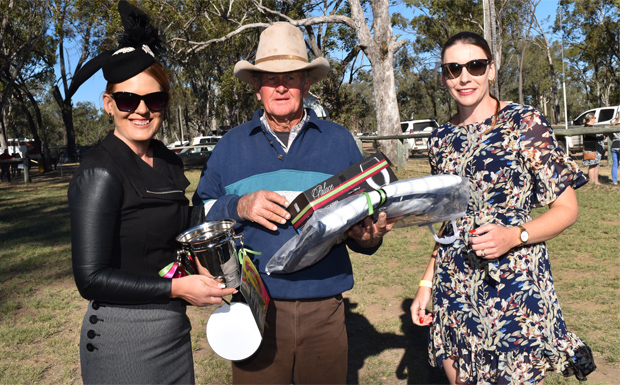 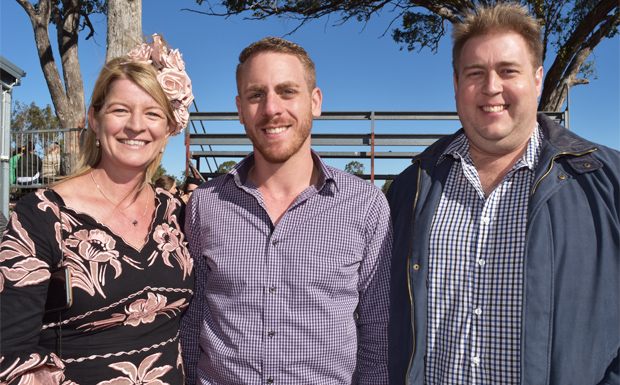 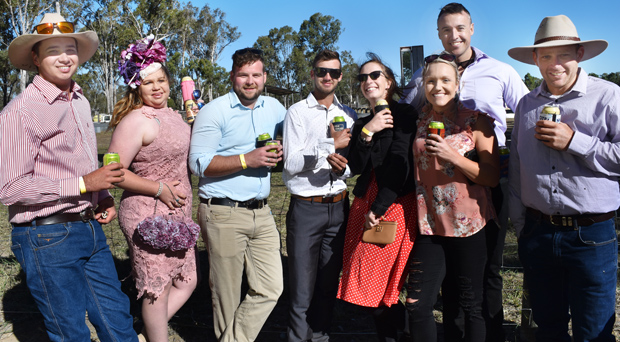 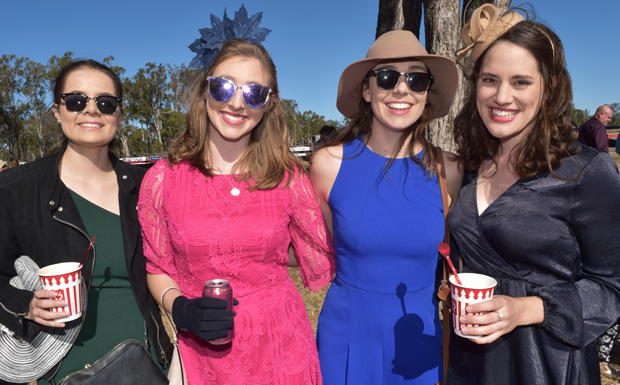 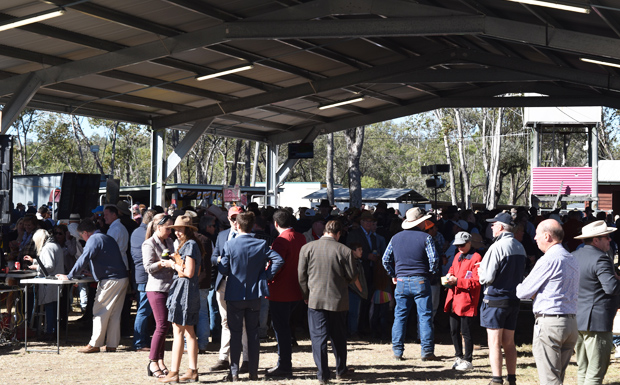 Fashions Of The Field

Taabinga Station’s Hannah Leu organised the Fashions competition which was held as usual on a runway off the Chahpingah Hall verandah.

Emma Clarke, from Ipswich, made it back-to-back wins, being sashed Best Dressed Contemporary Lady for the second year running.

Kingaroy milliner Verelle O’Shanesy was runner-up in the Best Dressed Classic Lady competition in 2018 but went one better this year, taking out the title. 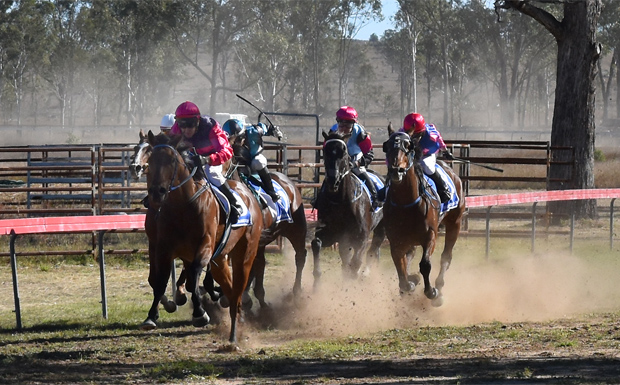 Snipstream, with Michael Heagney aboard, leads the way home in Race 2

2 Responses to Punters Throw Caution To The Winds