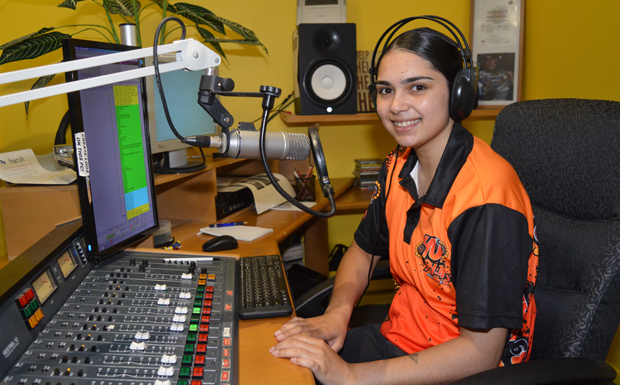 Atahnee Simpson … the new voice being heard on Cherbourg Radio

Until now Atahnee Simpson has never actually lived in Cherbourg … but when she started work at the local community radio station this week, she felt like she’d come home.

Atahnee was raised and went to school in Ipswich, but she’s a proud Wakka Wakka woman.

She’s been visiting Cherbourg ever since she was a little girl and has many relatives living in the town, including her dad Neville.

While still at school, Atahnee began a traineeship at the Brisbane Indigenous Media Association (BIMA), completing a Certificate III in Media.

She then started working as a cadet journalist at the National Indigenous Radio Service at 98.9FM in West End, Brisbane.

But all the time she was looking out for an opportunity to move to Wakka Wakka country.

So when a job became available recently at Cherbourg Radio, she jumped at the chance.

Atahnee began work at the radio station this week, and completed her first face-to-face interview on Tuesday (with Education Minister Grace Grace, who was visiting the town).

“Last year, I was coming here every month. I have a feeling of being home, being on my land …”

Atahnee has been “learning the ropes” at Radio Cherbourg, sitting in with Chrissy B daily from 9:00am.

The plan is for Atahnee to host her own radio show from 10:00am, starting next week.

“It will be my first time doing live radio. Before everything has been pre-recorded,” she said.