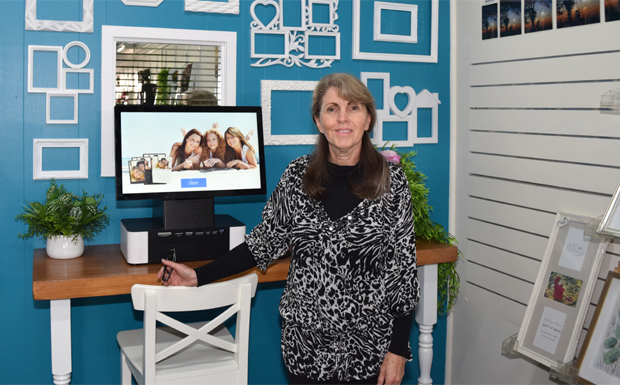 New technology has allowed Kingaroy Photo Lab to compress its former retail store into a corner of two others in Kingaroy and Murgon, yet still offer customers the same full range of services … Options Gift Shop owner Anne McAlpine shows one of the machines that have made it possible

Some people think that disappearing businesses are a sign their town is dying, but the reality is often the opposite.

Many businesses that close their shop aren’t going out of business … they’re simply using new options that technology have opened up to slash their overheads.

One enterprising businesswoman who’s done this recently is Kathy Steinhardt.

Kathy closed her long-standing Kingaroy Photo Lab early last month and is now busier than ever.

“I stopped selling cameras a few years ago because most camera buying had switched online,” Kathy said.

“Instead, my business focussed on producing prints of my customers’ photographs, as well as selling my own photos.

“So when my shop lease came up for renewal I began to ask myself if this was still the right business model for me, and I decided it was time for a change.”

That change has come in the form of two small machines that resemble desktop computers.

One of these is now installed at Options Gift Shop in Kingaroy Street, just a few doors down from Kingaroy Photo Lab’s former address.

The other is installed at the Murgon Florist in Lamb Street, Murgon.

Customers can bring their camera card or phone along to either location, slip the card or cable into one of the download slots on the front of the machine, and copy their photos across.

After this, they use a touch screen to select the photos they would like Kathy to print, the size they want and the finish they prefer, then press a button.

The machines transmit the order to Kathy’s home, and the finished prints are delivered to the shop from which they were ordered from the following day.

“Since Kathy put the machine in our shop I don’t think there’s been a day she hasn’t dropped off orders,” Anne said.

Anne said she knew of a few other businesses that has done similar things.

“Some types of retail just can’t be done without a shop – a cafe, for instance,” Anne said.

“But new technology is opening up lots of ways for people to work from home that are just as effective, but don’t have the big overheads.”

Anne said she knew of sign-writing and computer repair businesses that had taken the same path as Kathy and now worked successfully from home.

“I understand some people look at empty shops and think things are bad, but they’re not,” she said.

Anne suggested that what property owners needed to do if they wanted to fill their shops with long-term tenants was to start thinking outside the box.

“They need to look for tenants that really do need a shop, not just take whatever comes along,” she said.

“Things are changing, and what used to work well in the past doesn’t necessarily work just as well now.”