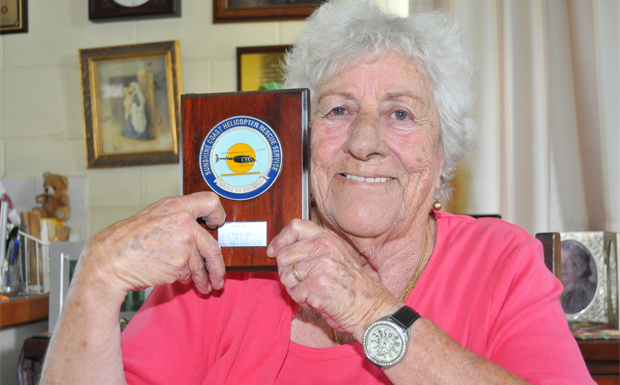 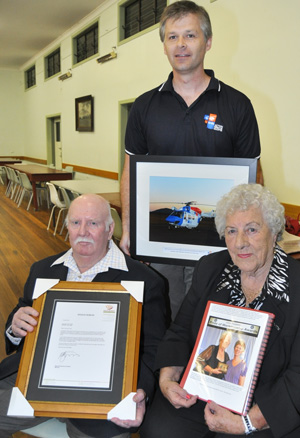 Chief pilot Brent Chamberlain, from the then-AGL Action Helicopter Rescue Service, with Frank and Irma Close at their farewell from Murgon in 2013

A funeral service will be held in Murgon next Monday (September 10) for well-known former Proston, Kingaroy and Murgon resident Irma Close.

The funeral will be held at 11:00am at St Joseph’s Catholic Church.

southburnett.com.au spoke to Irma in 2013, just before she and Frank moved to the Gold Coast to be closer to family.

She was a nurse at Murwillumbah General Hospital when she met her husband-to-be Frank, who was then a police officer at Coolangatta.

The couple was married in Rockhampton (they celebrated their 60th wedding anniversary in June 2013).

Frank’s job took him all over State.

In 1965, they came to the South Burnett for the first time when Frank was appointed officer-in-charge at Proston Police Station.

In 1977 – after a stint at Beaudesert – Frank retired from the force and the couple took a change in direction, buying a pub in Cunnamulla.

Irma worked as a cook at the Broadway Hotel in Kingaroy which was owned by her sister and brother-in-law Jim & Pat Staats.

At the time, Irma and Frank also ran the Hospital Shop, which was located in Albert Street opposite the Kingaroy Hospital.

When Jim and Pat sold the pub in 1982, Irma stayed on as cook for the new owners until 1987 while Frank managed the shop.

But then along came CRISIS – the Country Rescue Income Support Improvement Scheme – a fundraising group set up to support the then-Sunshine Coast Helicopter Rescue Service.

Irma and then-Murgon Hospital Registrar Dr Joe Gangemi set up CRISIS in 1994 after it was feared the vital helicopter medevacs that serviced the local hospitals may have to be cut back, or even discontinued, because of the cost.

Irma became president of the group in 1997.

Over the years, Irma was recognised for her work with CRISIS, including an Australia Day award in 2012, 2011 Quota Woman of the Year Award and a Chris Thompson Rotary Award.