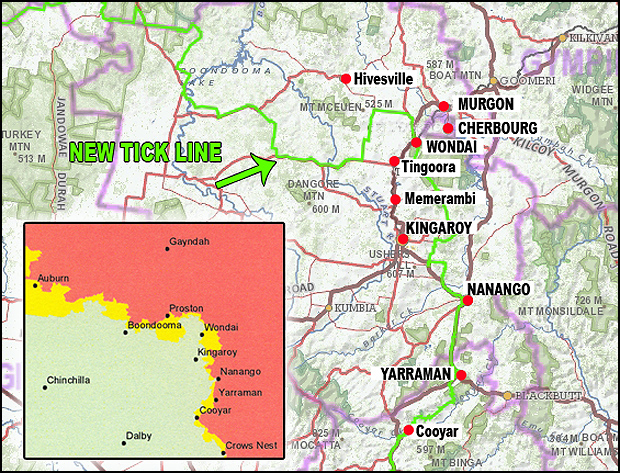 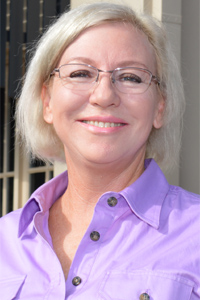 Friday morning’s announcement that “Option 3” has been selected by the State Government for the future of the Queensland tick line, has left South Burnett cattle producers angry and confused.

Option 3 is a new line demarcating “ticky” from “tick-free” country.

It will come into affect on July 1 and be reviewed in two years.

The announcement was made by Agriculture Minister Leanne Donaldson about 9:00am but the map she was referring to did not become available on the Biosecurity Queensland website until 11:00am, leaving local cattle producers anxious to determine the fate of their properties.

And the downloadable map on the website still showed the line as at December 7, 2005.

When the new interactive map finally appeared, it shows a swathe of the South Burnett which was previously in the “control zone” – the buffer area between tick-infested and clean country – had been shifted into the tick zone, opposite to what local producers had been pressing for.

Producers most affected are those north of the Chinchilla-Wondai Road.

Many of these have been spending large sums of money for many years keeping their country clean.

A spokesperson for Member for Nanango Deb Frecklington said eight petitions about the future location of the Tick Line had been presented to the State Government from the South Burnett area during the consultation period, but it appeared only half of these producers had achieved what they requested. 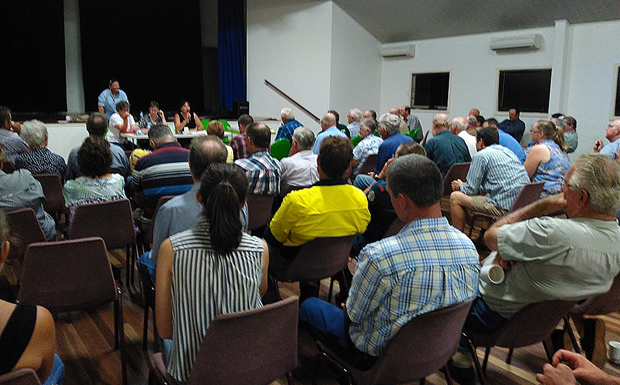 Agriculture Minister Leanne Donaldson said she had made her decision after “listening to advice from producers, delegations from industry and guidance from the Department”.

As previously announced, she confirmed the “control zone’ had been abolished.

“More than 1000 surveys were collected during the consultation on the location of the tick line, as well as submissions from industry groups and feedback collected during producer meetings,” she said.

“More than 1000 producers attended information and consultation meetings and I have received delegations and visited areas of contention around Kingaroy, Hughenden and Durong.

“I have listened to the concerns that were expressed and, wherever possible, acted to meet the wishes of the majority of producers.

“The consultation was around three options. The decision is to adopt Option 3, but with amendments based on the feedback from industry and individuals.”

The Minister said she wanted to ensure that producers who had attempted to control ticks without success would not be disadvantaged by being placed in a position where they were obliged to eradicate.

“There will be an opportunity to review the tick line once we see how it impacts producers,” Ms Donaldson said.

“In two years the Department will assess the effectiveness of eradication and I will look to adjust the line accordingly.” 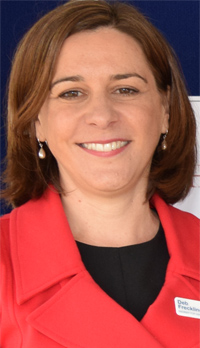 Member for Nanango Deb Frecklington said petitioning had paid off for several groups of graziers in regards to the positioning of the tick line, while others had lost out completely.

Mrs Frecklington said four out of the eight groups who submitted petitions through her office had achieved the outcome they were seeking, while the four other groups had been denied their requests.

“This means that the Minister ignored the feedback of half of the primary producers in my region, many of whom had had spent a great deal of time trying to demonstrate to the government their opinion on the location of the tick line,” she said.

“Hundreds of producers, who have spent thousands and thousands of dollars over the years on keeping their properties tick free will now find themselves in the dirty zone.

“Option 3 was not the choice of the majority of landowners and it takes a step backwards for large areas of the grazing land. I know many land managers who will be extremely disappointed with this outcome.

“I am pleased however that the petitions I was able to present to the Minister for half of the groups were successful and they have have achieved the outcome they wanted.

“I was particularly disappointed though that when the Minister for Agriculture released her statement on the new tick line, the maps were not available until nearly two hours after the announcement.

“We have had hundreds of producers waiting on this announcement for months, and when it did come, the Department didn’t even have the courtesy of putting the maps up on the website,” Mrs Frecklington said.

“When crossing from the infested zone to the free zone, producers can have their livestock certified tick-free by an accredited certifier at any location, including their own property,” Dr Crook said.

“This will reduce transportation costs, helping to sustain our profitable primary industries and improve animal welfare.

“Owners of low risk livestock, such as horses and sheep, will have an obligation to only move tick-free animals into the tick-free zone, but an accredited certifier will not have to assess their animals.

Cattle tick and tick fever will continue to be notifiable when they occur in the free zone.

Property owners will be required to eradicate cattle ticks if their property becomes infested in the free zone.