Moreton Resources – the re-named Cougar Energy – has unveiled a new company structure which will place all its South Burnett holdings in a new 100 per cent-owned subsidiary company.

In a statement to the ASX on Tuesday, Moreton Resources CEO  Jason Elks said all subsidiary companies operating in Mongolia, Hong Kong and Singapore had been closed.

MRV Tarong Basin Coal will have 100 per cent of MDL385 (Moreton Resource’s Kingaroy coal project) transferred to it.

An associated application for an exploration permit (EPM25922) covering an area 10km south of Kingaroy, (below), will also be transferred to MRV Tarong Basin Coal.

Mr Elks said this tenement was complementary to the aspirations of Moreton Resources within the Tarong Basin.

“MRV Tarong Basin Coal (will) advance as a single entity, to allow the potential progress of the project, to operate with far greater transparency and engagement with the South Burnett community,” Mr Elks said. 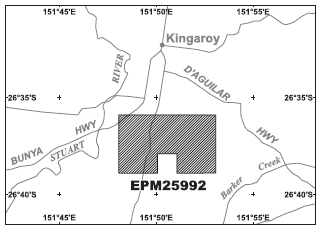 “MRV Tarong Basin Coal’s soal purpose is to evaluate and advance the prospects of developing a suitable coal supply that will ensure economic stability of the region, and as such will continue to assess viability of a potential project that has the prospect of bringing a substantial infrastructure and development project to the South Burnett.”

Mr Elks said MDL385 had the potential to contribute significantly to the economic prosperity of the region.

“The company is committed to working closely with local residents, landholders and the broader community to minimise and manage potential impacts on the region,” he said.

“Engagement with local residents, including landholders, town-based residents and others, will be a key component for the company as a social licence to operate is paramount, and that is through a genuine, open and transparent commitment to community, environment and safety.

“Moreton Resources’ potential project through its already released announcements on 30-plus year mine life seeks to allow the region to continue to prosper for another 30 years, should the company be able to provide a competitive, superior quality coal supply that can be considered as an alternate to other supplies or regions of operation with the State that supply electricity to the national grid.

“Within the region there have been other prospects for mining of coal that could potentially suit the Power Generator, however MDL385 has significant advantages over and above potential cost and quality, as also it has a significantly smaller footprint than other proposed area and also does not rely upon infringement or impact on State land or potentially sensitive areas, which is a consideration for all and any mining operations.”

Thrashers Notch Up Another Win