Get Ready For A Festival Of Cycling

The Tour de South Burnett cycle race is returning to the South Burnett next month, with a new name, new towns and five routes open to local cyclists, ranging in length from 5km to 107km.

The annual festival of cycling, which attracts some of Australia’s best riders, will be called “Ciclismo South Burnett” this year.

“Ciclismo” is an Italian word meaning “cycling”, and is attached to some of the biggest cycling festivals overseas.

This is the fifth year that Cycling Queensland has brought the Queensland Road Team Series to the South Burnett, and the festival has been growing and changing each year.

This year, the festival has expanded to include a new “Ride the Regions” Challenge Series as well as the popular Community Rides – to make it a real carnival of cycling.

The Ciclismo South Burnett will be held in Murgon and Kingaroy on June 20-21 (although Kumbia won’t miss out entirely as the Day 2 Giro passes through the town).

Organisers expect lots of community fun and activities for the whole family in Murgon on Saturday and Kingaroy on Sunday, with prizes and giveaways.

On Saturday, June 20, “Ride Murgon” will get underway from at 10:30am at Murgon Youth Park with 8km and 25km community rides (the “IGA Supa 8km Community Ride” and the “Hell for Leather 25km Challenge Community Ride”)

On Sunday, June 21, “Ride Kingaroy” will get under way at 7:00am at Rotary Park in Haly Street (note the new location from previous events) with a 5km community ride for all the family.

On Sunday, the “Great Bunya Challenge” will test riders who can choose from 107km or 70km challenge rides to the top of the Bunya Mountains.

The “Giro d’South Burnett” (Round 3 of the Brisbane Camperland Qld Road Team Series) will feature the leading riders from Queensland.

Stage 1, on Saturday, will traverse a 98.5km route to Boat Mountain as well as sprint laps through the heart of Murgon, while Stage 2 on Sunday will race 108km to the Bunya Mountains via Kingaroy, Tarong and Kumbia. 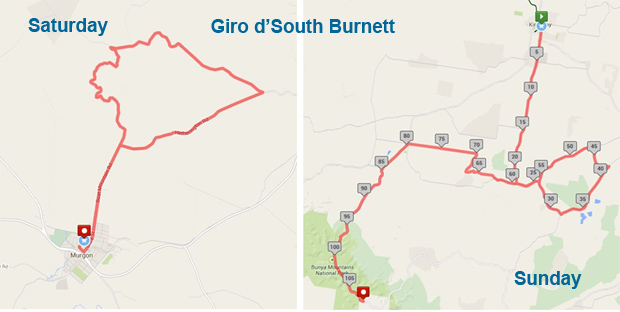