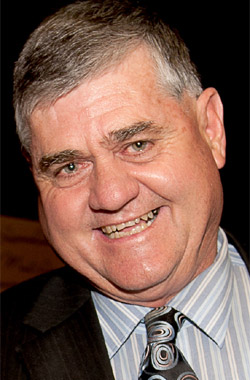 AgForce has welcomed the State Government’s announcement of the creation of the Queensland Cattle Industry Biosecurity Fund as a positive step towards promoting biosecurity and managing diseases impacting on the beef sector.

The new fund was announced on Friday at the Gracemere Saleyards in Central Queensland by Premier Campbell Newman and Minister for Agriculture John McVeigh.

It will include an initial $2 million grant and a loan of up to $3 million to be matched dollar-for-dollar by cattle producers.

AgForce General President Ian Burnett said the fund would provide a basis upon which assistance to producers, particularly those affected by Bovine Johne’s Disease (BJD), could commence.

“Producers across Queensland will suffer financial consequences as a result of the quarantine measures the State Government has had to put in place as part of its obligation under the Stock Act to respond to notifiable diseases,” Mr Burnett said

“It is right that these producers be assisted to help ease their financial burden.”

“It is important we do all that we can to maintain this status to mitigate any risk of damage to our clean image and market access and to uphold any economic advantage we have.”

Mr Burnett said it was now important Government consult closely with the cattle industry to develop a framework around which any levies may be built.

“We appreciate this initial funding and now implore Government to consult as widely and as comprehensively as possible with stakeholders and to move forward on delivering assistance to impacted producers as quickly as possible,” he said.

“Queensland beef producers are a key contributor to the State’s economy and any decisions made on how industry is levied must be in the best interest of the entire industry.”

Footnote: On Friday Member For Mt Isa Rob Katter criticised the State Government’s approach to BJD and called for the quarantine process to be abandoned in favour of “producer management”.