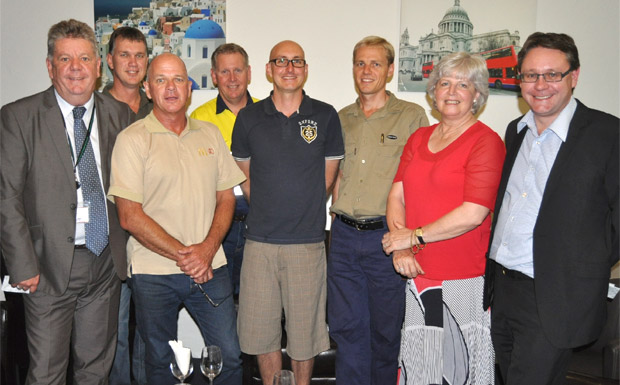 The Kingaroy Chamber Of Commerce and Industry elected a new executive committee for 2013 at its Annual General Meeting held at Kingaroy’s Broadway Hotel tonight.

Delivering the President’s Report, Mr Steele said that 2012 had been “a difficult year” for many businesses in the region but there had also been a number of positive developments which led him to believe 2013 would be better.

He said the main problem the region faced was attracting and retaining skilled professionals.

But he thought the South Burnett’s biggest strengths were its livability, its great recreational facilities, its diversified economy, and that the cost of living was significantly lower than Brisbane.

Mr Steele said the KCCI would be looking at ways to effectively promote these things in the year ahead.

He also recorded his thanks to outgoing executive committee members Merv O’Reilly and Lynnelle Richardson for their service to the Chamber.

John Carey, delivering the Treasurer’s Report, noted that after recording a small loss last year the KCCI had turned a small profit this year.

This was the result of a recent re-organisation of the Chamber, he said, which had left it in a sound financial position.

The meeting was also addressed by South Burnett Mayor Wayne Kratzmann and Mr Roger Gorrel, the South-West Queensland Regional Manager of the Chamber Of Commerce and Industry Queensland.

Footnote: The KCCI will be holding its annual members’ Christmas break-up meeting at Accents Restaurant at 30 Alford Street in Kingaroy at 5:00pm on Friday, November 30.