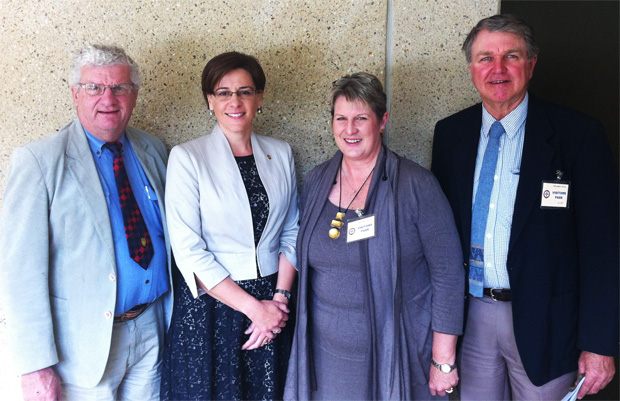 A group pushing for the de-amalgamation of Toowoomba Regional Council has submitted its proposal to the Minister ahead of today’s deadline but they’re less than hopeful that the State Government is listening.

Jeff Close, president of the Crows Nest and District Tourist and Progress Association, said 48 per cent of all eligible voters in the Crows Nest area had signed a petition calling for the breakaway.

Petition sheets had also been submitted from across the area, including Yarraman, Gowrie Junction, Highfields and Goombungee.

The proposal is to form a new Local Government Area based on the boundaries of the old Crows Nest and Rosalie shires. This new shire, to be dubbed Northern Downs, was recommended by a Size, Shape and Sustainability review completed just prior to the forced amalgamations.

Mr Close said representatives from the group met with Local Government Minister David Crisafulli last Thursday. And although they were very grateful to local Member Deb Frecklington for organising the meeting, they are not hopeful of success.

“She emphasised that around Crows Nest this is the number one issue,” Mr Close said.

“But the Minister has a very narrow idea of how to fix the shires in Queensland. The State Government has very rigid guidelines which would have us going back to the original shires, which is exactly what we don’t want.

“He just won’t be looking at anything else.”

They had warned the Minister that their submission “was not up to scratch” because it would not include all the financial information demanded, as this information was not available from Toowoomba Council.

“It’s beyond the pale. We all have day jobs … the timeline was too narrow. We have spent thousands of dollars just getting it to this stage, all entirely out of our own pockets.”

Mr Close said Toowoomba Regional Council had delivered “a box full of data” to assist the group with the financial analysis, but it had only included part of the income analysis … the rates base for the former Crows Nest and Rosalie Shire areas.

However the group did an analysis of the original Size, Shape and Sustainability report which had “voluminous” financial information.

“The SSS report identified two main issues which could affect the future financial viability of an amalgamated Shire: the weakness of the rates base and possible closure of the Borneo Barracks,” Mr Close said.

“One of these has already been fixed for us by the TRC. Rates have risen 87 per cent in Crows Nest and 127 per cent in Rosalie. The other hasn’t occurred.”

The group doesn’t expect to hear a result of their submission before late November or early December, but they’re not planning to stop working on their campaign, collecting signatures and raising awareness of the issue.

And if ultimately they’re unsuccessful, they have another strategy up their sleeves.

“We believe there are enough members in the Council who are amenable to it being divided into three areas: Northern Downs, Southern Downs and a central Toowoomba area,” he said.

Mr Crisafulli said today the submission process was critical to let communities have their say on the 2008 forced amalgamations.

“The former Labor Government declared war on local governments, wiping out 83 councils and tearing the heart out of communities across the State,” he said.

“Despite this fact, we have urged communities to put forward submissions based on what’s in their best interests now and in the future, and not just to try and right a wrong from the past.”

He will now assess each proposal on its merits before deciding which will progress to Boundaries Commissioner Col Meng and Queensland Treasury Corp for closer analysis.

“There has been some criticism that we have made the process too onerous, but this is a serious business and it’s our responsibility to make sure communities know all the potential costs involved,” he said.

To progress to the next stage, the community needed to provide a strong, evidence-based, community-backed submission based on the pre-amalgamation local government boundaries.

A detailed estimate of the potential financial costs was also required.

The submission had to include a petition signed by at least 20 per cent of the voting population that showed an understanding of all the cost implications.

Petitioners needed to demonstrate an understanding that the former shire wishing to de-amalgamate would have to meet all costs involved, including their own, and those of the Council they wished to break away from.

“These submissions must entail more than names on a piece of paper. It needs to map out a clear path for the future,” he said.

If the Minister refers a proposal to the Commissioner, Mr Meng will provide a report including recommendations to the Minister by November 28, 2012.

“It would be irresponsible of us as a government to allow communities to de-amalgamate on a whim only to have people revolt months later at the prospect of higher rates to pay for it,” he said.

“If a submission stacks up, it will go to a vote and if more than 50 per cent of the population says yes, then they will return to their former shire.”