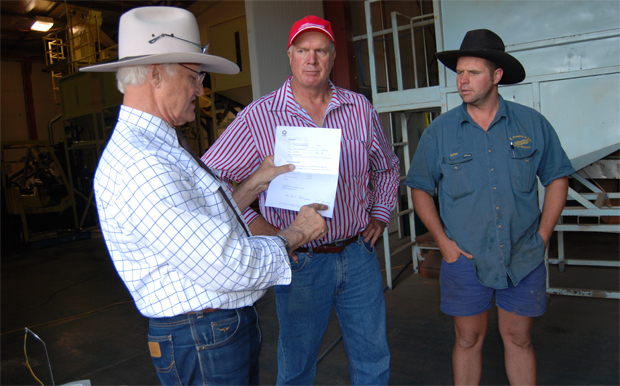 Member for Kennedy Bob Katter, Carl Rackemann and Darren Crumpton discuss soaring gas prices during a visit to Crawford in March this year

If the domestic gas supply situation does not improve over the next 12 months, Queensland could run out of time to address shortages predicted to occur from 2015.

Skyrocketing gas prices became an issue in the South Burnett during the recent State Election campaign with local industries that rely on gas supplies complaining about sudden price rises and uncertain supplies.

Katter’s Australia Party candidate for Nanango Carl Rackemann even suggested at one point that a percentage of all new gas developments be quarantined for use by the domestic market.

“As with roads and rail and public hospitals, one of the biggest lessons Queenslanders should learn from the last two decades of Labor is that failing to plan is planning to fail,” he said.

Mr McArdle said the role of the Queensland Gas Market Adviser was to look forward and identify problems in the State’s emerging LNG industry before they happened.

The draft review notes a balance has not been achieved between large gas demand for export supply and demand for domestic gas supply.

The review found the lack of access to future gas supply contracting information resulted in the State’s gas reserves remaining in short supply for new domestic supply contracts (before and after 2015), while major industrial customers were unable to resolve future contracting requirements and business plans.

“This lack of liquidity is contributing to a high level of uncertainty in the market, which is also affected by the uncertainties of domestic and international LNG supplies and future gas prices,” Mr McArdle said.

Consultation on the draft review will close on July 13. Copies can be downloaded from the DEEDI website