Downsize And Save, Says RACQ 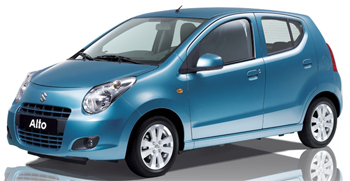 Suzuki Alto ... cheapest car to own and operate

The Suzuki Alto is the cheapest car to own and operate in Queensland, according to a survey released today by the RACQ.

The motoring body said consumers have access to the widest and most fuel efficient range of vehicles ever but they could still make drastic savings on motoring costs by downsizing.

The 2012 Vehicle Running Costs Survey compares the private operating costs of 101 cars from different classes and with different engine types, including LPG, petrol, diesel, hybrid and for the first time, electric.

Mr Spalding added that even switching between engine sizes in the same class could mean good savings on running costs – without sacrificing performance.

“High fuel prices are forcing many owners away from large vehicles into medium or smaller cars to save money. But Ford’s four-cylinder turbo petrol 2.0 litre Falcon EcoBoost and the 4.0 litre LPG Falcon could help those looking to buck that trend,” Mr Spalding said.

The survey ranked the Suzuki Alto as the cheapest car to own and operate across all vehicle classes, with an operating cost of $116.70 per week or $6068.29 a year.

“While it may be impractical for motorists who own a LandCruiser to downsize to a small car like the Alto, it is worth noting that the Suzuki owner can operate their car for more than three weeks for the same amount the Toyota owner spends in one week,” Mr Spalding said.

“Interestingly, while the Alto’s overall running costs dropped by $2.77 per week compared to last year, the LandCruiser weekly costs rose by $9.44 per week.”

The survey also compared a range of new vehicle technologies, including hybrid cars and, for the first time, an electric vehicle.

“The cheapest of the six ‘green’ technology vehicles in our survey was the new Toyota Prius-C Hybrid,” Mr Spalding said.

“Its $23,990 price was also low enough to contain its depreciation and interest costs.

“The only electric vehicle on the local market, the Mitsubishi iMiEV, fared the worst of the green vehicles because of its expensive $48,000 price tag, and correspondingly high depreciation costs.”

Mr Spalding said that electric vehicles, like most new technologies, would become more affordable over time.

RACQ’s Running Costs Survey found depreciation remained the single biggest cost component across all categories. However, the impact wasn’t felt on a weekly or annual basis, but at the end of the ownership period.