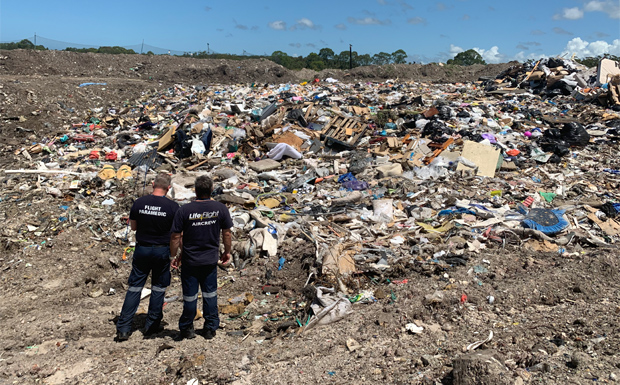 Rescue, anyone? An RACQ LifeFlight rescue team was called out to the Noosa tip earlier this year after a discarded emergency beacon accidentally activated (Photo: RACQ LifeFlight)

RACQ LifeFlight is reminding Queenslanders to check their emergency beacons after false activations accounted for 25 per cent of all searches this year.

These included a search for an activated distress beacon around the Brisbane River in April and – in the most recent incident – a search undertaken by the Bundaberg-based RACQ LifeFlight Rescue crew on Tuesday (May 19).

The Australian Maritime Safety Authority (AMSA) tasked the rescue chopper to investigate an area near Gympie after an Emergency Locator Transmitter (ELT) was activated.

The crew was able to narrow down the location to a private property.

Once the helicopter had landed, Bundaberg RACQ LifeFlight rescue pilot Franco Bertoli said the activated beacon was found inside a private aircraft that was parked in a hangar.

“The batteries had actually expired in 2008.”

Mr Bertoli said it was a timely reminder for pilots to check and update their aircraft’s ELT.

“Ideally, pilots should have a 406 MHz beacon, or an appropriate ELT, attached to their aircraft.

“Make sure your beacon is fitted with GPS and can give search crews your exact location, should you need urgent assistance,” he said.

Mr Bertoli said there are several types of emergency beacons, each suited to different vehicles and vessels.

“If you have an old or out-of-date beacon, please get a new one and make sure you dispose of the old one correctly.”

Several missions this year have led rescue crews to rubbish dumps after beacons had been thrown away.

This includes a search by the Sunshine Coast RACQ LifeFlight Rescue crew at the Noosa tip in February.

“RACQ LifeFlight Rescue will always respond to distress calls when tasked because you never know who could be in trouble,” Mr Bertoli said.

“When buying a new beacon for hiking, boating or motorbike riding, you should register the beacon with AMSA.

“It’s free and can be done online.”

Emergency contacts can be listed during registration to be used as an initial point of call in an emergency.

AMSA has supported the call to action, reminding people to check the  AMSA website for the most up-to-date information on the use and disposal of beacons.