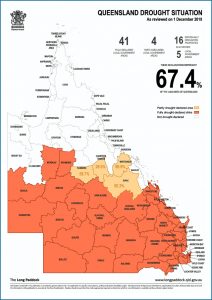 Two-thirds of Queensland is officially in drought

AgForce claims the State Government has failed to appreciate the seriousness of the drought, and is unwilling accept advice from people on the ground.

The rural lobby group says many rural communities in Queensland have been left on the brink of ruin.

It has repeated its calls for a waiver on land rent and subsidies for councils to provide rate relief.

Chair of AgForce’s Drought Working Group, Mark Collins, slammed the  State Government for its “slow, inflexible, inadequate and off-handed response” to the drought.

“Primary producers are at their wits’ end – water and feed are being trucked in at great expense, herds are being laboriously hand fed, calves are being weaned early or put down, farm businesses are going under – but it appears that the Government is asleep at the wheel.

“And when farm businesses die – when our cash flow dries up – so do the rural communities that depend on the dollars that farmers spend in town.

“The government can’t seem to understand the scale of the unfolding disaster and have no idea how to respond. They are just spinning their wheels in the bulldust.

“They are so hopelessly out of ideas that the Premier went on to Alan Jones’ Sky News program in October to ask for new ones.

“In response to her request, AgForce provided a list of solutions that would make a real difference to droughted producers and the communities which rely on their business to prevent them slowly dying.

“In particular, we recommended a waiver on land rent and vehicle registration costs, financial support to allow councils to provide rate relief, and additional funding for pest and weed control.

“All of these would be relatively quick and simple to implement, are within the government’s authority, and would provide immediate relief for financially stressed farm businesses.

“Despite this, and the fact that the Premier said publicly she would meet with farmers to discuss ideas, it took us over a month just to secure a briefing with her, and a further month to get a reply.

“The letter when it finally came – only after we told them industry could wait no more – was an insult to farmers and to regional Queensland.”