Recipe For Reaching Out 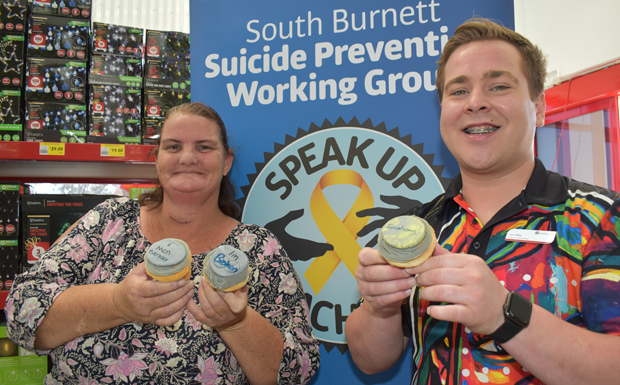 Speak up, reach out for help … these are the messages that the South Burnett Suicide Prevention Working Group is trying to spread during Mental Health Week.

As well, as sharing some delicious, if looking a tad unhappy, cupcakes.

Volunteers from the working group were handing out free “Depressed Cupcakes” at Bunnings in Kingaroy and at Mitre 10 in Murgon on Tuesday as part of their Mental Health Week activities.

They were aiming to raise awareness about mental health issues in the South Burnett as well as distributing “Where To Get Help” brochures.

“We want to make that zero-in-five,” Kay said.

“People should not feel embarrassed about seeking help.”

“Depressed Cakes” have become a worldwide phenomenon. Despite looking black, grey and gloomy, they’re actually delicious and they’re for a good cause, providing an opportunity for volunteers to have all-important discussions about mental health.

The idea began in the United Kingdom as a PR stunt for raising mental health awareness.

“Pop up” shops soon started appearing around Europe and the United States.

The first “Depressed Cake Shop” appeared in the South Burnett during Mental Health Week in 2013, and they’ve been popping up in different locations ever since.

The South Burnett Suicide Prevention Working Group is hoping to hold future cupcake events at both the Coolabunia and Murgon saleyards.

Other free Mental Health Week activities this week include:

In the meantime, to reach out for help, phone: