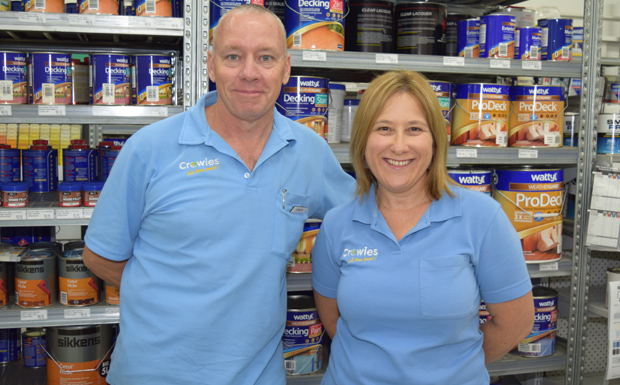 A South Australian couple who moved to Kingaroy 18 months ago has been hard at work transforming one of the region’s oldest paint stores into one of Australia’s latest franchise outlets.

Simon and Gail Gibson, the new owners of what was formerly Earle’s Paint Place in Haly Street, have been busy setting up the first Crowies outlet in Queensland.

Simon told the Kingaroy Chamber Of Commerce and Industry’s latest Meet’n’Greet last week that Crowies was a long-established South Australian company whose roots stretched back to the 1920s.

However, it only began trading as Crowies in 1996 and now has 18 stores in its network.

The Kingaroy store was the first to open in Queensland, followed by a second outlet in Hervey Bay.

Simon had been working for Crowies for many years before deciding to branch out into his franchise.

He moved to Kingaroy in early 2018 to begin getting the new shop ready, and Gail joined him four months later.

The business covers the area from Blackbutt to Murgon and west to Jandowae, and visits commercial clients in the north, south and west on a regular weekly schedule to service their paint requirements.

They can also join a free Crowies Club that offers customers a 10 per cent discount on their purchases, and keeps track of what they buy in case customers forget what the brand name and shade of their last paint buy was.

Simon said he and Gail have been very keen to support local community groups and activities.

The shop has now become a Saturday morning can collection drop-off point for the Kingaroy Scouts.

Simon and Gail have also employed a new part-time staff member with learning difficulties to help with day-to-day operations, and are very proud to have him on the team.

The couple has also invested heavily in building up the shop’s stock so they can mix orders of paints for customers who may need just as small amount of a particular shade to finish a painting job.

“We’re focussed on not letting customers down,” Simon said.

“Winning customer loyalty is an ongoing process, and we believe that’s something we need to do every day.”

Swickers now processes 18 per cent of Australia’s pork, Swickers General Manager Linchon Hawks told the meeting, and while the industry has been experiencing some tough times in recent years the longer-term outlook is very positive.

The company currently processes 900,000 pigs a year, and last year it exported seven million kilograms of pork to seven countries.

Swickers employs 650 staff at its Kingaroy processing facility, rising to 750 staff during the peak “ham season”. The payroll injects about $46 million every year into the region’s economy.

Linchon told the meeting the company’s new Kingaroy kill floor was four times larger than the previous one, and required a $15.5 million Euro investment in automated equipment.

This machinery is now undergoing “dry testing”, and “wet testing” is expected to start in early June before the new floor becomes operational a fortnight later.

The new kill floor will allow the plant to lift production to 21,000 pigs a day.

Although the Council’s two applications to Building Better Regions failed to secure Federal Government co-funding for the project, community consultations on the project had been held last month and Council staff were now trying to finalise the overall design of the project and estimated costs.

James said the revitalisation would be approached in stages.

The sequence of the stages would be subject to future discussion but information would be supplied to Councillors in the next few months so they can make an informed decision about the best path forward.

The KCCI represents the interests of Kingaroy and district businesses, and it holds meet’n’greets throughout the year where members can receive updates on issues of local interest.

The six-weekly events are open to all South Burnett businesspeople – whether they’re KCCI members or not – and are held at a different local business each time.

A $10 meeting fee applies to cover the cost of drinks and nibbles.