Weekend Of Fun And Games 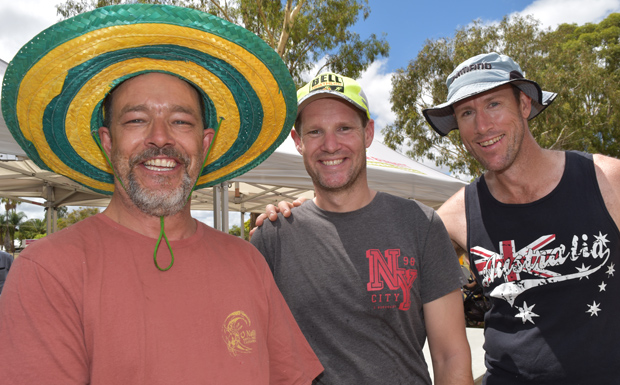 There’s nothing more Aussie than wrapping your laughing gear around a meat pie! The winners of this year’s Kingaroy pie-eating competition were Cardell Turner (2nd), Scott Collier (1st) and Mick Freeman (3rd) … Scott overcame Cardell and reigning champion Mick in a photofinish

Australia Day was spent in fine fashion around the South Burnett at the weekend … with meat pies, lamingtons, jumping dogs, gumboots and even a few cooee calls.

Then on Saturday, attention turned to official and non-official events held in just about every town in the region.

In Kingaroy, a fun morning organised by a small committee headed by Cr Danita Potter was held at the rear of the Town Common Hall in Oliver Bond Street.

South Burnett Australia Day Ambassador Justine Christerson, who had been the guest speaker in Blackbutt, shared her story.

South Burnett Regional Council CEO Mark Pitt then explained the history of how January 26 had become a public holiday as well as telling some amusing stories about differences Australians encounter when travelling overseas. 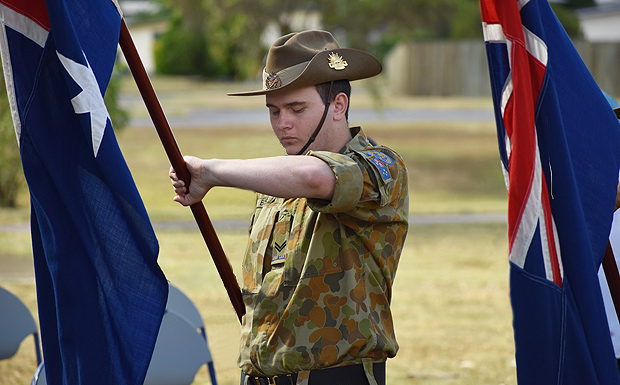 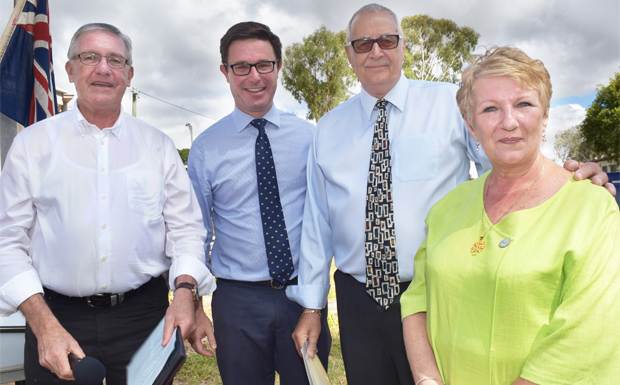 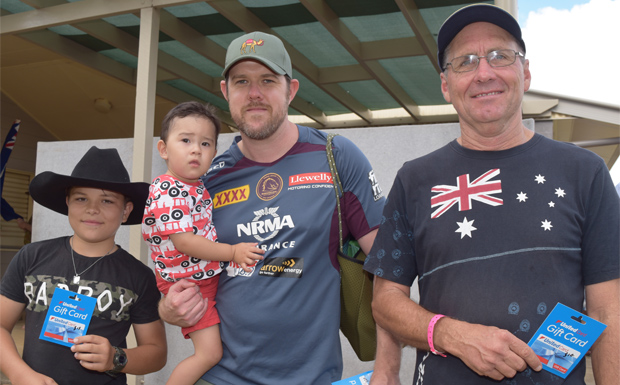 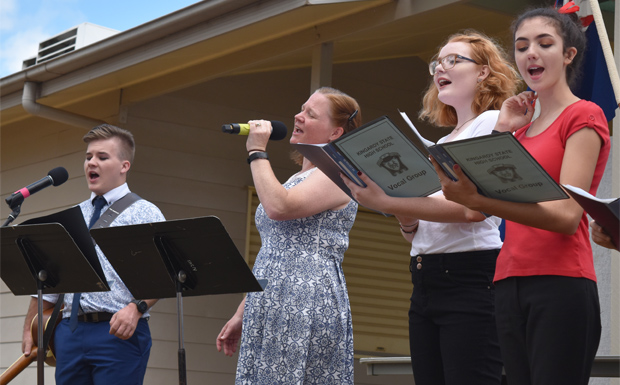 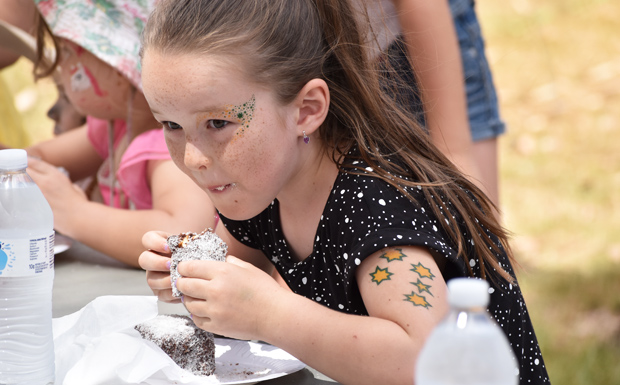 Ruby Beil, 6, from Kingaroy, was getting stuck in during the lamington-eating competition 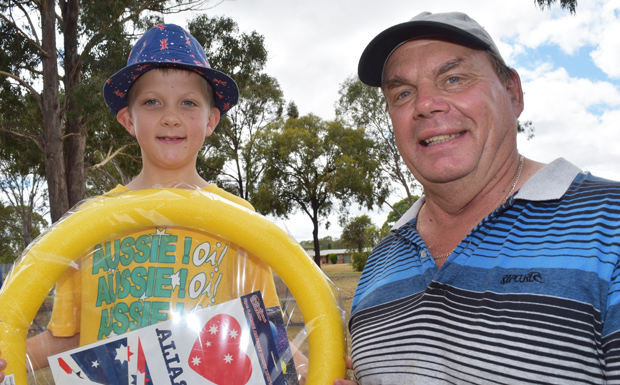 The winner of the “junior” round of the lamington-eating competition was Evan Freeman, 8, from Kingaroy … he was presented with his prize by sponsor Dale Cox, from Cox Plumbing 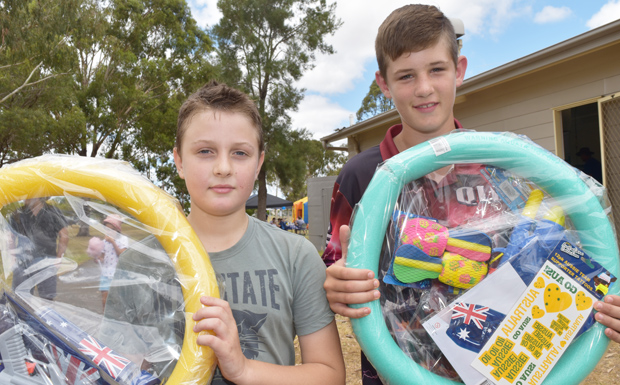 The winners of the “senior” lamington competition were Thomas Frohloff, 11, Kingaroy; and Josh Freeman, 12, Kingaroy 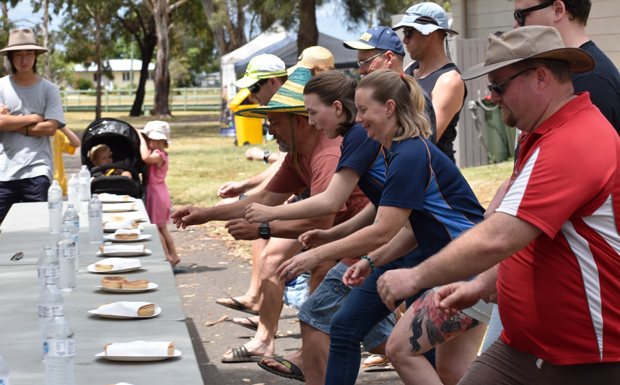 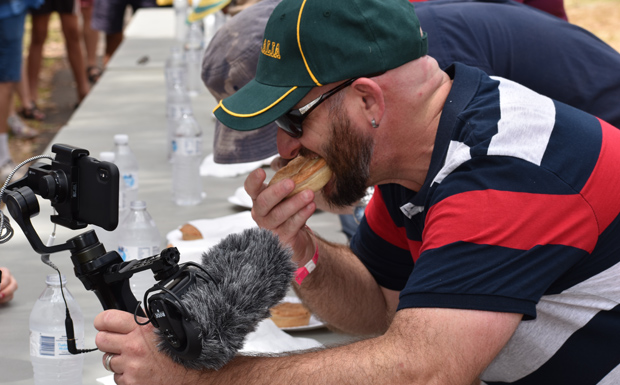 Damien Martoo, from The Martoo Review, couldn’t help himself … he had to keep on filming as he ate his pies 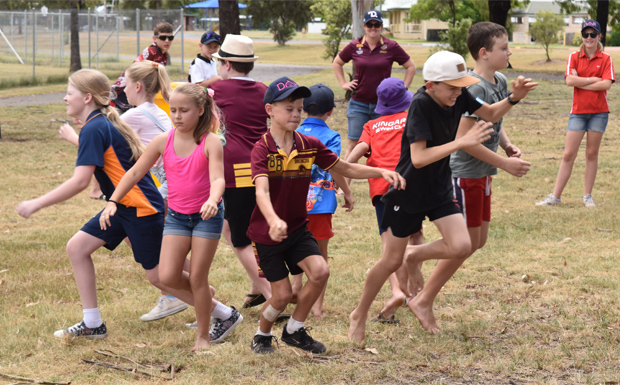 The cane toad race … yes, you’re right they’re not toads (so who forgot the toads, this year?) The race involved youngsters hopping out of the ring (just like toads), but with their eyes closed. The winners were given cartons of eggs left over after the Lions sausage sizzle 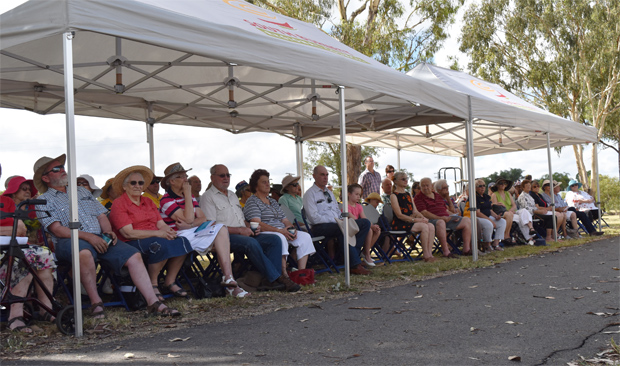 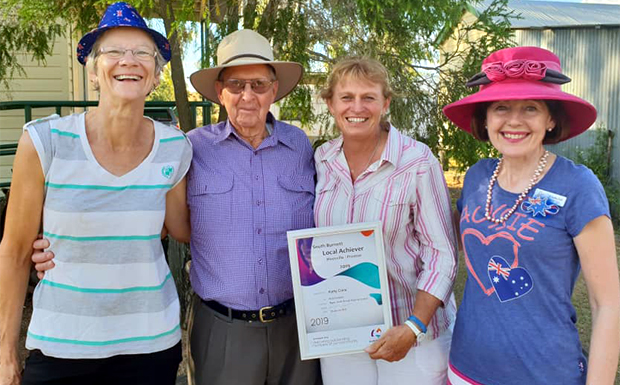 Boondooma Homestead organised a community dinner and concert at the historic property.

The event kicked off with a flag-raising ceremony at 5:00pm and continued in the Homestead’s barn, which is normally used to house the large crowds that attend the annual Bush Balladeers Muster each April and Scots In The Bush Festival in August.

Guests were ferried to the Homestead from Murgon, Wondai, Hivesville and Proston by bus, and this year’s Hivesville-Proston Local Achiever award winner Kathy Crane was a special guest. 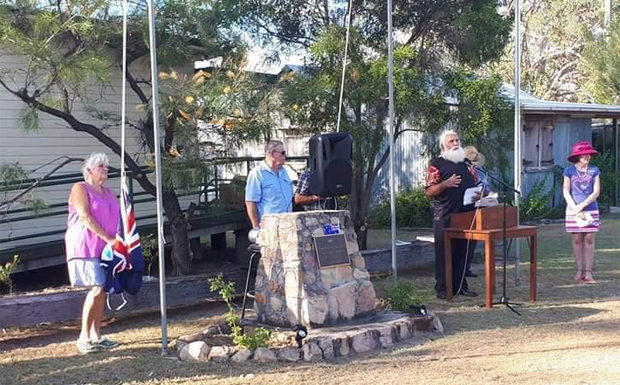 Boondooma Homestead’s Australia Day activities got under way with a flag-raising ceremony, and were followed by a community dinner and concert 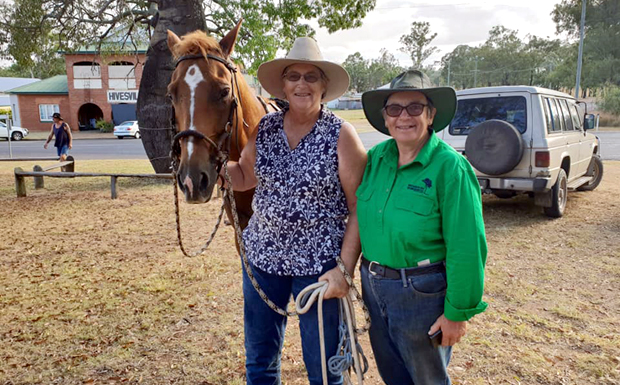 Hivesville began the town’s Australia Day bright and early with a community barbecue breakfast in Anzac Park opposite the Hivesville Hotel.

The breakfast was catered by members of the Hivesville Progress Association, and members had to get up fairly early on Saturday to ensure they could begin serving the first dishes at 7:00am. 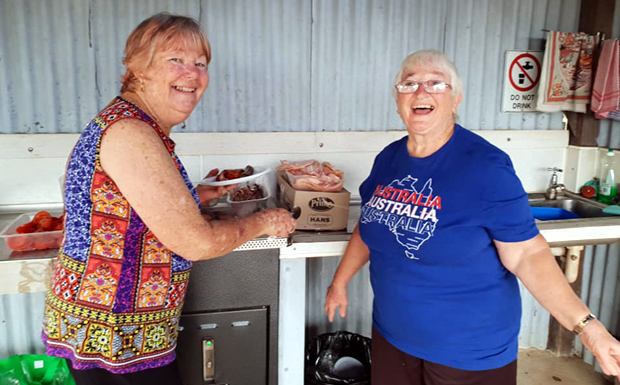 Julie Ramke and Heather Cronin, from the Hivesville Progress Association, manned the barbecue to serve up a freshly cooked Aussie breakfast to the hungry crowd 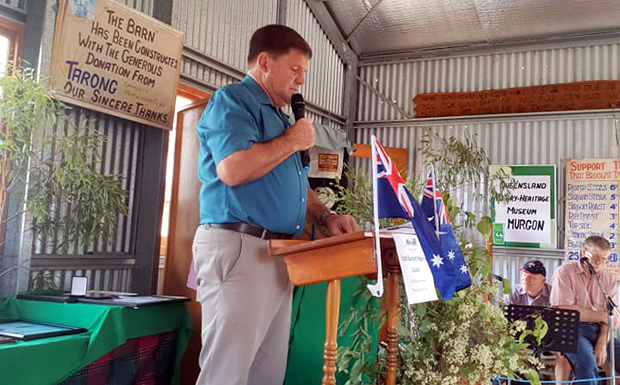 Murgon marked Australia Day at the Queensland Dairy and Heritage Museum with a community breakfast and family fun morning.

The barbecue breakfast got underway at 7:00am and was followed by a recognition of Murgon’s Australia Day Award winners at 8:30am, then live music from Pat and Michael Pincott and a flag-raising ceremony before concluding with a morning tea about 10:30am.

Murgon Lions and the Cloyna rural firies also organised a fun afternoon at Cloyna Hall which featured old-fashioned games and even some gumboot tossing. 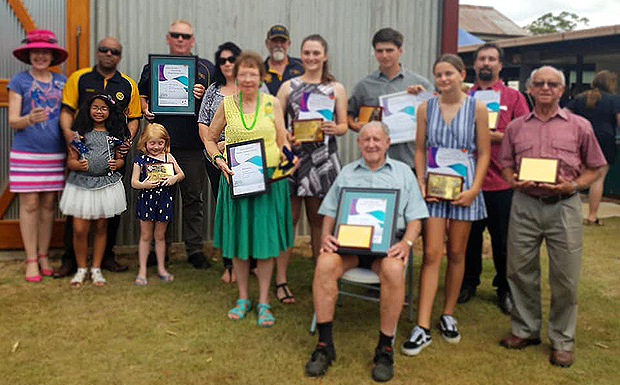 Nanango’s Australia Day event, held at Nanango Showgrounds, was organised by NaTDA in conjunction with the Nanango Show Society and the South Burnett Regional Council.

Local residents enjoyed a free breakfast of scrambled eggs, bacon and sausages to start the day off.

Other highlights of the day included a tug-o-war, the official naming of the “Les Schloss Meeting Room” (see separate report), and a performance by local musician Jeff Hancox. 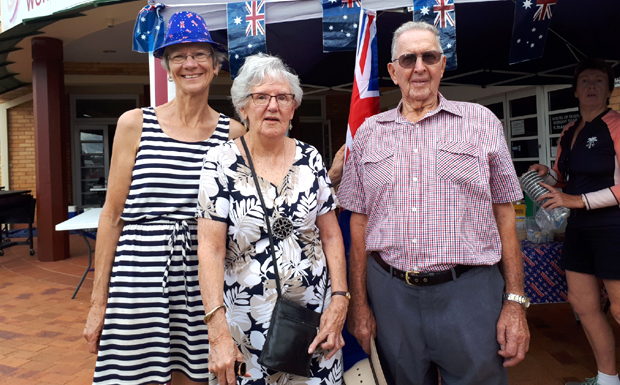 Wondai marked Australia Day with a community breakfast on the lawns of Wondai Town Hall that drew an estimated 200 people.

As well as the open air breakfast, the morning’s activities also featured an Australia Day Affirmation and a flag-raising ceremony, as well as special recognition for Wondai’s two recent OAM recipients, Roy Radunz and Elaine Madill, and winners and nominees of this year’s South Burnett Australia Day Awards. 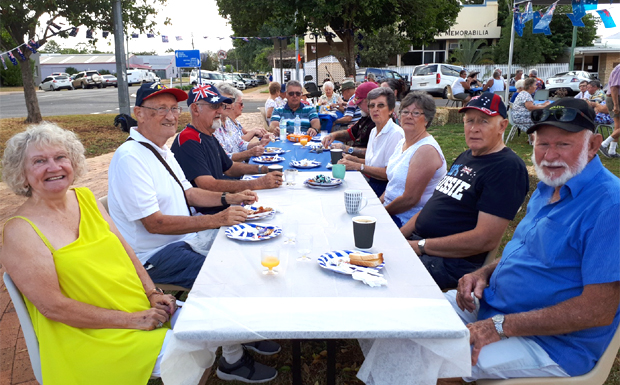 A large crowd packed the lawns outside Wondai Town Hall for the annual Australia Day community breakfast, which was catered by the Wondai Lions Club 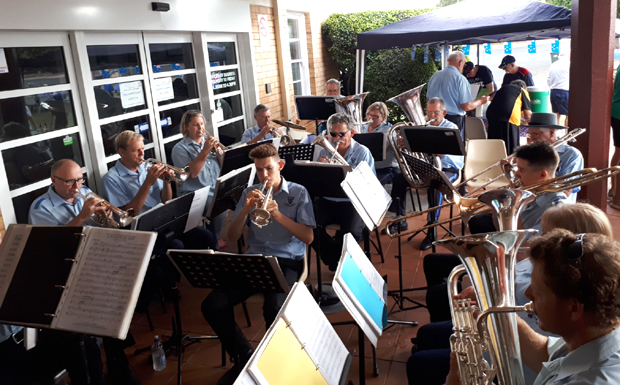 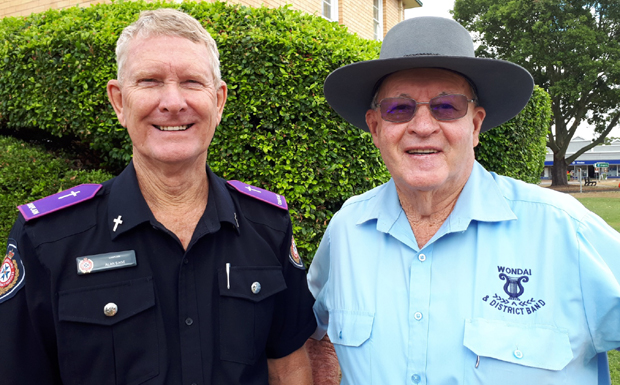 Congratulations to everyone with South Burnett connections who received awards in the Australia Day Honours list: