Flying Foxes ‘Not A Health Risk’ 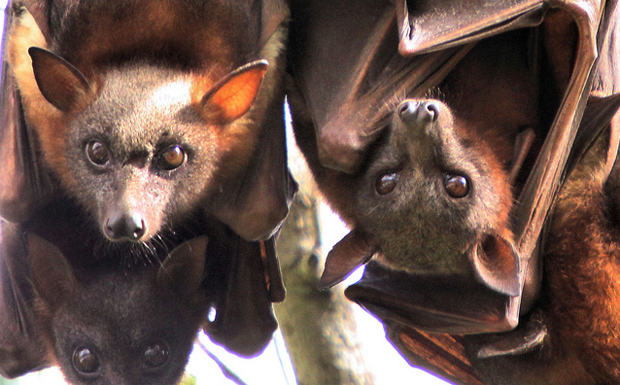 Little Red Flying Foxes (Pteropus scapulatus) hang together in close groups in colonies of up to a million individual animals (Photo: Mdk572)

South Burnett Regional Council has released a statement following complaints raised by Proston residents about a large flying fox colony which has moved into a reserve on the edge of town:

“Council is aware and acting on a large colony of flying foxes that have travelled to Proston where they are roosting in a reserve on the edge of town.

“Whilst determining the size of the colony is difficult; surveys estimate approximately up to five hundred thousand Little Red Flying Foxes (Pteropus scapulatus) are camping in the reserve.

“The abundance of flowering blue and spotted gums in the region is the likely reason such a large number have travelled to Proston.

“The colony is expected to remain whilst there is an abundant food source available.

“Once the eucalypt flowering ends, the numbers of bats is expected to decline and the roost should disperse.

“The roost is creating a number of issues for residents, including noise, odour and excessive droppings/guano as flying foxes can defecate in flight, splattering objects beneath their flight path with excrement.

“Guano is easily removed with water.

“In swimming pools, it is neutralised by normal chlorination.

“Whilst flying fox droppings on cars, washing and other surfaces is extremely annoying, it does not pose a serious health risk.

“It is recommended that to avoid damage to lacquered surfaces, cars parked in the street can be covered with a tarpaulin.

“To avoid the contamination of rainwater tanks with guano from bats, birds and other animals, keep tanks covered, chlorinate regularly and drain and clean the tank and area used for water collection on a regular basis.

“The spillage mechanism of the first flush following rain is the best way of keeping your tank clean.

“Council has been advised that the risk of contracting viruses or disease associated with bats or flying foxes is low.

“Flying foxes are not a health risk unless you are bitten or scratched. The risk can be eliminated entirely by not touching or handling them.

“The transmission of Hendra virus from bats to horses is a risk but that risk can be minimised.

“This risk can be further reduced by not feeding or watering horses beneath trees that flying foxes are roosting or feeding in and covering food and water containers.

“Vaccination is also available for horses.

“Further information can be obtained by contacting the Queensland Health Hotline on 13 Health (13-43-25-84) if you have concerns about possible exposure of people to Hendra virus.

“For information to avoid contamination of rainwater tanks, handling of bats and possible health risks to humans and horses, we encourage residents to go to Council’s website

“Council are working with the State Government and ecologists to develop a flying fox management plan for the Proston roost to identify suitable management options.”