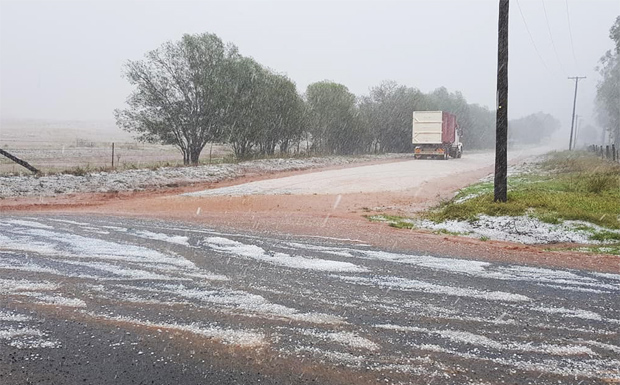 South Burnett farmers and property owners have been left counting the cost of a series of storms which crossed the region on Thursday.

Workers employed to pick the fruit also suffered, with their vehicles and caravans peppered by hail stones.

At nearby Kumbia State School, hail stones smashed windows in several classrooms prompting an early call to parents to collect their children.

The school will open as usual on Friday, although several classes will be held in the library.

The Bureau of Meteorology reported that hail stones up to 7cm in diameter fell at Kumbia.

Three people were transported to Kingaroy Hospital in a stable condition after they were injured at Coolabunia during the wild storm.

A QAS spokesperson said the trio – two women and a baby – suffered multiple cuts and abrasions after hail smashed their car windows.

The hail, lashing rain and wind caused havoc on South Burnett roads, with fallen trees and debris at one stage simultaneously blocking the Bunya, D’Aguilar and Burnett highways.

Other roads were cut by flash flooding, including several roads in the Goodger and Haly Creek areas.

Police warned South Burnett residents to avoid unnecessary travel due to the hail and storm damage.

The storms left a trail of destruction as they tracked north-easterly across the region.

Hail up to 5cm was reported between Proston and Murgon.

At 3:12pm, a storm cell touched down at Tansey sparking a “tornado warning” from BOM for areas around Kilkivan.

Sheds were destroyed and homes and vehicles damaged by flying debris.

At one point in the afternoon, more than 6000 Ergon Energy customers – from Cooyar to Durong – were without power due to storm damage to the electricity network

The storms caused widespread disruptions to traffic across the South Burnett.

SES crews and council workers worked non-stop on Thursday afternoon and late into the night to clear roads.

These road closures had been reported by TMR by 7:15pm, Thursday (with updates to 10:00pm):

* Booie Road, and Robin and Lee Road, at Glan Devon

Member for Nanango Deb Frecklington said the storms which had swept through her electorate had hit hard.

“There has been significant damage and we’ve heard reports of at least three people injured,” she said.

“People are shaken up – it was a huge storm system and there may be more storms tonight and over the weekend.

“The coming days are going to be tough for a lot of people in my community as they clean up. We are a resilient bunch but this will test us.

“A lot of farmers were getting ready to pick their crops at this time of year and this will be a massive setback.

“I urge everyone to stay safe and stay indoors tonight and listen to the authorities.” 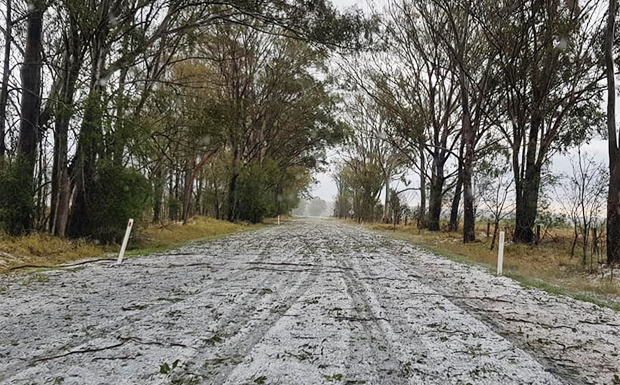 Hail banked up on the side of Peterson Road, near the Edenvale Road South intersection, on Thursday afternoon (Photo: Denise Keelan Photography)