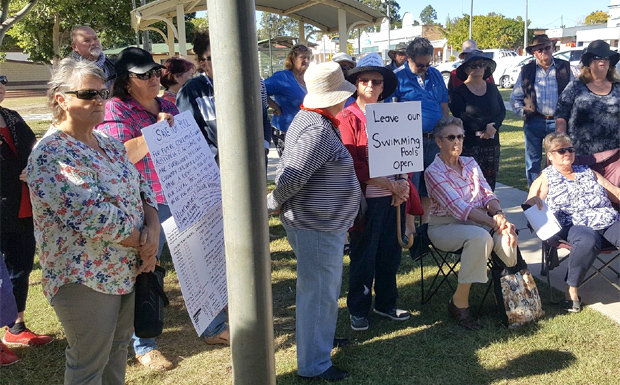 Residents supporting Wondai Pool at a public consultation meeting in Coronation Park in May
(Photo: Facebook)

South Burnett Regional Council has opened a small window of opportunity for residents to have a final say on its controversial Draft Sport and Recreation Infrastructure and Strategic Plan.

Written submissions must be received before the close of business on November 7.

Only written submissions will be accepted and there will be no public forums.

The draft that is now open for consultation is Version 6.

After these final submissions are received, the plan will then be finalised and presented to Council for adoption at its November meeting.

The draft plan, which sparked anger in some quarters when an earlier version was released in April, aims to guide Council’s “investment in parks, recreation and open space management over the next 10 years”.

Community meetings were held in October 2017 in Blackbutt, Nanango, Murgon, Proston, Kingaroy and Wondai; 39 surveys were received from sporting clubs and 195 from the community.

Interviews were held with Council staff, and visits were made to 11 primary and four secondary schools.

Councillors were given the opportunity to provide feedback on the draft plan before its public release.

Councillors were then given an opportunity to review these submissions.

Council CEO Mark Pitt emphasised the document now being put on public exhibition was still a draft and there was an opportunity for further changes to be made based on written submissions.

He said councillors were not “endorsing” the document; they were “receiving” it so it could be put out to the public.

However, Council was on a very tight timeline and the final document would have to be adopted in November.

Cr Ros Heit said there were “learnings” to be had from the Sport & Rec plan process.

“It has caused a lot of angst in the community. I think there’s definitely things we could have done better,” Cr Heit said.

“The fact that we’re 10 months into it and that at the very last minute before we’re putting this draft out, we’ve still got a whole lot of errors that were raised eight, nine or 10 months ago, is frustrating.

“I certainly encourage the community to go through (the document) in detail.

“This will be our long-term plan and we do want to make sure that we get it right.”

Mayor Keith Campbell said the fact something was written in the document didn’t “absolutely set it in concrete”.

“It’s a guideline. It is a document that supports community groups and organisations in their efforts to raise funds for their particular endeavours,” he said.

“And it also creates the opportunity for Council for fundraising as well as grant-funding opportunities.”

Mayor Campbell said it had been a “mammoth exercise” but admitted that with hindsight some things could have been done better.