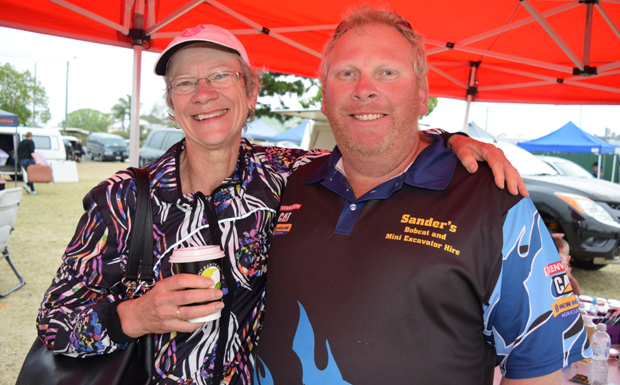 Cr Ros Heit and Heath Sander commiserated with each other under a tent as torrential rain began to fall on the inaugural Murgon Rail Trail Festival at about 11:30am on Sunday morning

After having the town’s Christmas Festival washed out twice in a row and Sunday’s inaugural Rail Trail Festival brought to an abrupt halt by a downpour, some people could be forgiven for thinking Murgon can’t take a trick lately.

But the festival’s organisers – and many stall-holders – didn’t begrudge the unexpected deluge, and have every intention of running the event again next year.

“The rain was unfortunate, but our farmers really needed it and things were going very well until it started,” Murgon Business and Development Association president Leo Geraghty said.

“Really, were we astonished at how many people came out to support our Festival considering how overcast and windy Sunday turned out to be.

While he hadn’t spoken to all the stallholders who took part in the festival, Leo said the Lions Club had already told him they were very happy with their half-day’s effort and he thought that probably applied to many others, too.

“We had at least 65 runners taking part in the 3km, 5km, 10km, half marathon and full marathon events, and I’ve heard there were about 30 to 40 people taking part in each session of the giant obstacle course we set up inside Murgon Showgrounds.

“The billy cart races drew a lot of kids, and the pig races were very popular, too.

“And the car and motorbike show, the petting zoo, the Men’s Shed’s display of wagons and the mini train ride involved people all morning.”

The rain, which was threatening as the last of the day’s runners crossed the finish line and mounted the dais to receive their awards, began to fall about 11:30am and quickly turned into downpour.

Stallholders who could get away hastily packed up and made for their cars, while those that couldn’t sheltered under tents or in the alcoves and awnings of nearby stores.

The deluge last about half an hour but by the time it stopped the Festival’s planned run to a 2:00pm finish had been prematurely cut short.

Nonetheless, Leo said he was confident the event will be back in 2019, and the odds of a fine day next time are much stronger.

“We had so much support for this festival from so many different quarters that we were amazed,” he said.

“But it tells us this is something lots of people want so yes, we’re certainly doing it again next year.”

Murgon’s next two big events are the BP Dam Inland Fishing Classic, which will run on October 6-7, and the Murgon Music Muster, which will run from October 29 to November 4. 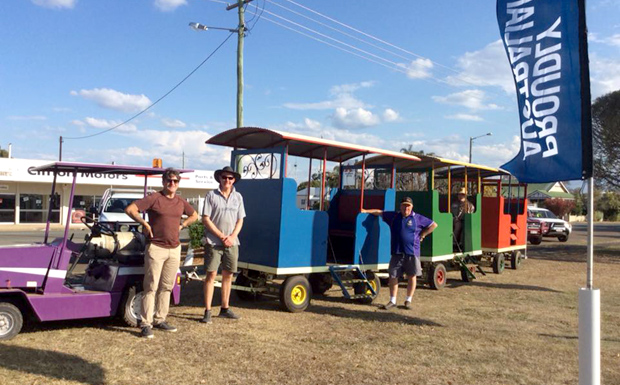 Preparations for the Festival began the day beforehand, with lots of equipment – including this unusual railway-themed ride – arriving on site 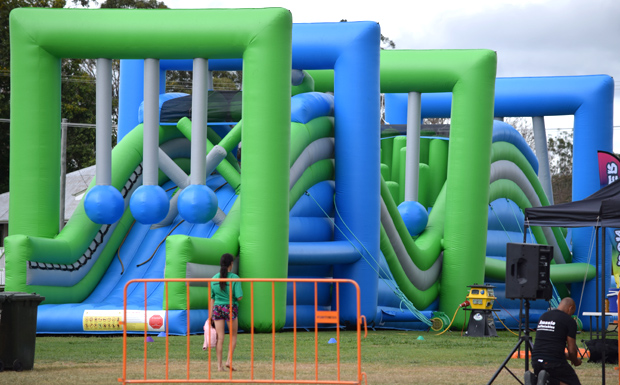 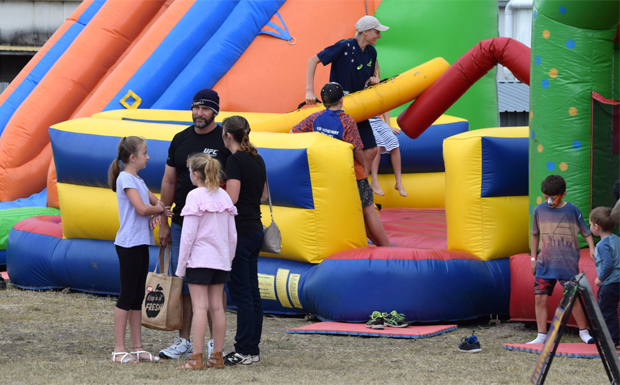 Festival goers who went early in the day got to enjoy lots of market stalls, amusement rides and live music 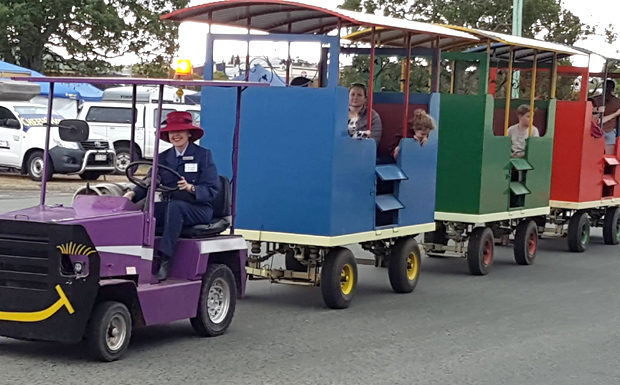 Cr Kathy Duff ferried guests around the grounds in this railway wagon ride, wearing the uniform that once belonged to Murgon railway station assistant Arthur Joyce … 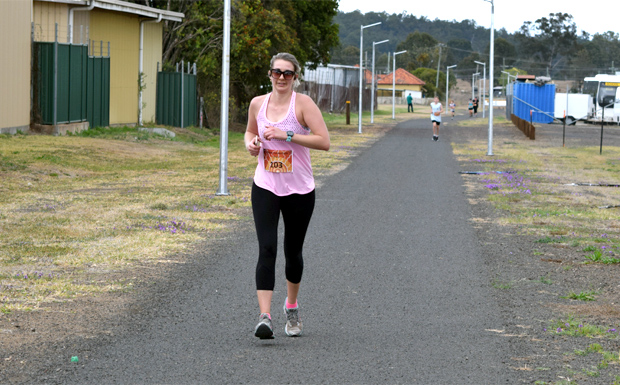 … while out on the South Burnett Rail Trail, runners took part in a variety of competitive runs ranging from 10km right up to a full 42km marathon 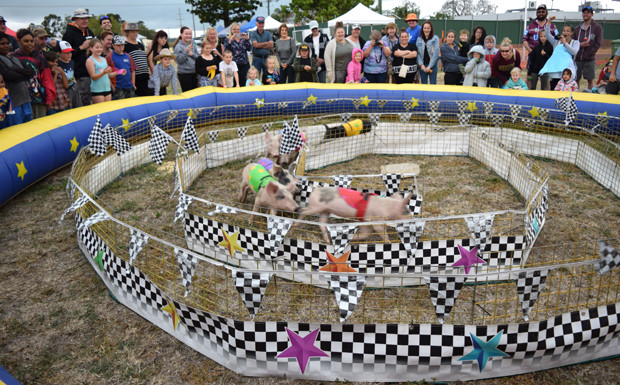 Pig races proved a popular attraction, too, drawing a big crowd of onlookers every time they were run 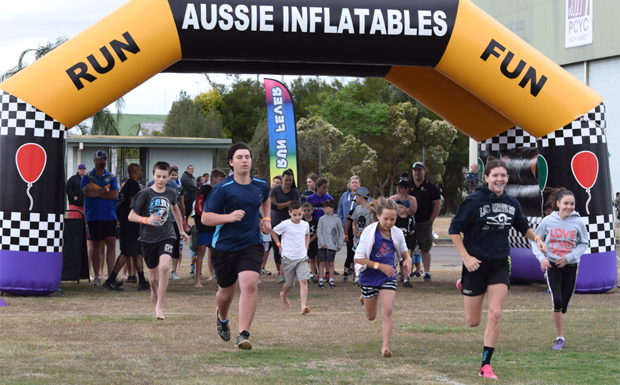 And they’re off! Guests who paid to tackle the obstacle course had 60 minutes to complete the challenge, but some agile young athletes were able to do it in about a third of that time 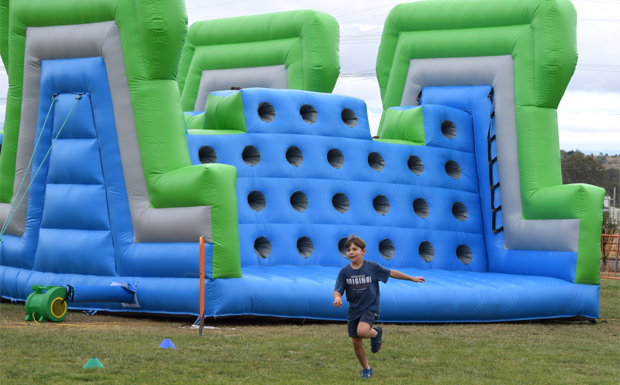 Most of the gigantic obstacle course rides dwarfed younger competitors …. 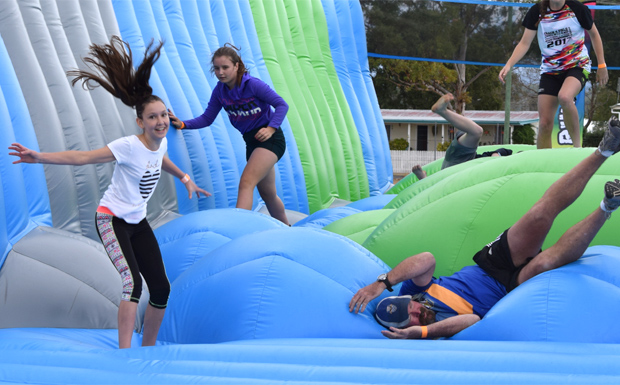 … but some others defeated even seasoned adults 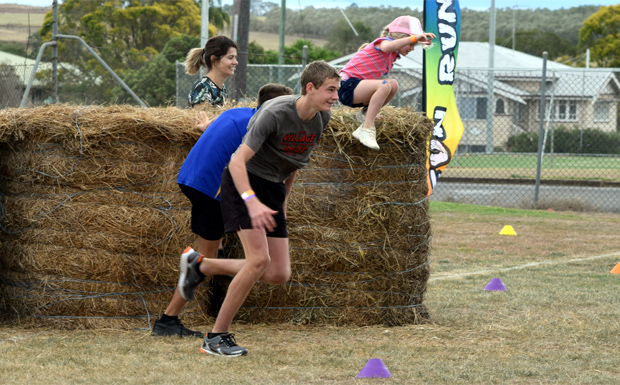 Surmounting hay bales was another challenge set up in the grounds 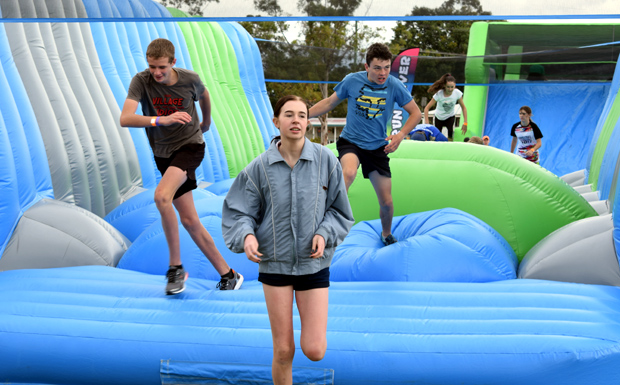 Through at last! This trio approach the end of the course and face a difficult decision: take a rest or do it all over again? 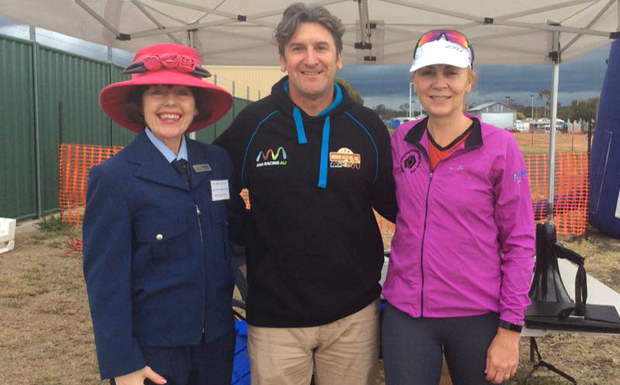 Back at the Rail Trail, Deputy Mayor Kathy Duff and run organiser Alun Davies from AAA Racing waited for the final running competitors to cross the line 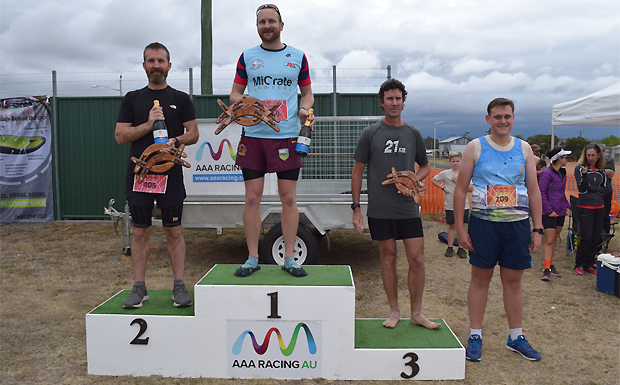