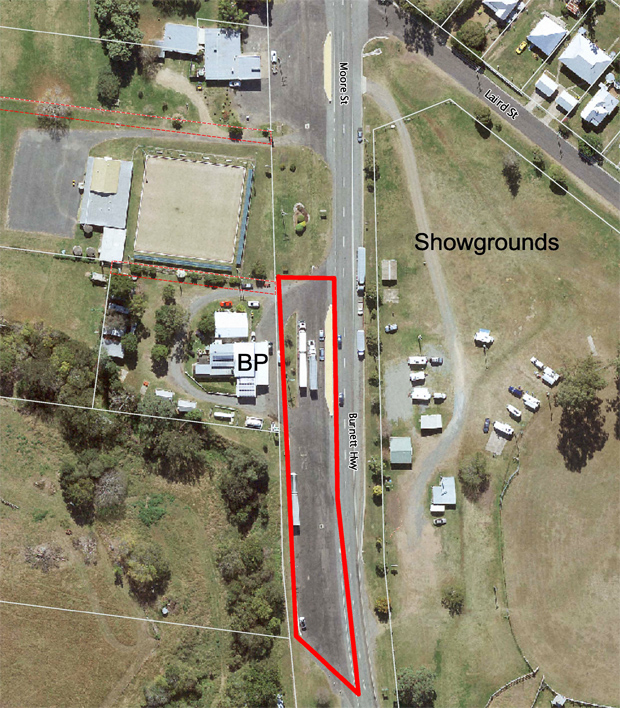 A map marking out the permitted stopping area outside the BP service station, supplied by Gympie Regional Council 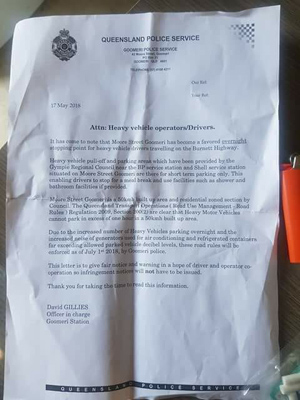 The letter, apparently from Goomeri Police, which was shared widely on social media on Wednesday (Photo: Facebook)

Gympie Regional Council has confirmed that semi-trailers and B-Doubles are allowed to park overnight on a bitumened area opposite the showgrounds in Moore Street, Goomeri.

This follows controversy on social media earlier this week where truckies were sharing a letter – apparently from Goomeri Police – warning they could be fined for overnighting in Moore Street (the stretch of the Burnett Highway which runs through Goomeri).

The letter stated that from July 1, police would be enforcing a road regulation that prohibited heavy motor vehicles from parking for more than an hour in a built-up area.

This followed complaints about noisy air-conditioners and refrigeration units on trucks stopped overnight.

A Council spokesperson supplied a map (above) to southburnett.com.au which shows the area where trucks are allowed to park.

However, there is a second paved area to the north which is not included in this Council-controlled area.

“This one comes under the Traffic Act,” the spokesperson said.