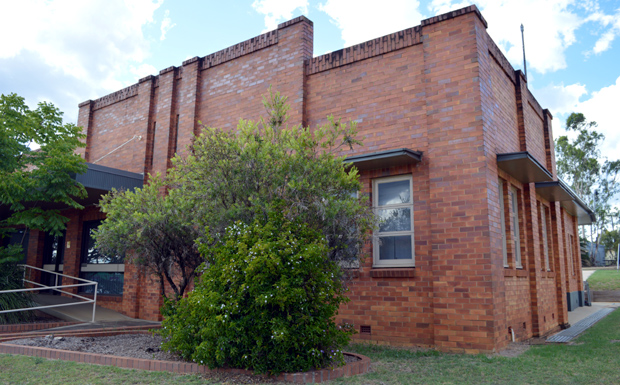 A February decision that the South Burnett Regional Council spend $475,000 to buy the former WBBEB building in Haly Street, Kingaroy, and a car park behind it has now been axed

In February, Councillors voted to purchase the former Wide Bay-Burnett Electricity Board building – which is located between the Carrollee Hotel bottle shop and the Kingaroy Regional Art Gallery – from Ergon for $475,000.

The intention at the time was to use the building to relocate the Council’s engineering staff from their offices in the former Nanango Shire Council Chambers to Kingaroy.

But within a week of the vote being taken, some Councillors gave the matter more thought and expressed concerns the Ergon purchase might not be as good as first thought.

One touchy point was that the Kingaroy purchase could have wound up costing the Council more than $1 million when all costs were taken into account.

This was because a large dirt car park behind the building would need to be upgraded to bitumen.

There would also be costs associated with wiring the building up for computer and communication systems, and the Council would also have to pay legal fees on the purchase.

Against this $1 million outlay, the Council would still be unable to avoid paying maintenance costs on its Nanango building to fix ongoing problems with its roof, air conditioning and drainage systems.

And when maintenance of the Nanango office was complete, the Council would be left with a large, refurbished building that was mostly empty except for a few customer service staff.

Relocating the 20 engineering staff from Nanango to Kingaroy would also remove a large amount of lunch money from Nanango’s economy.

At the Council’s March meeting, Councillors voted to rescind the February decision.

But after the vote, Cr Terry Fleischfresser proposed in a follow-up motion that the matter be allowed to lay on the table for a few months.

Cr Fleischfresser said he thought a complete financial analysis of the purchase, along with a study of operational efficiencies that might be made if Council bought the building, was worth looking at.

Councillors agreed to his proposal.

However, at Wednesday’s meeting, they voted to reaffirm the March decision.

Councillors said they had discussed the proposal amongst themselves in the course of preparing the 2017-18 Budget, and had come to a decision not to proceed with the purchase in light of the Council’s current budget position.

They’d found that if the purchase went ahead, it would significantly reduce the money available for any future building renewal or replacement projects.

They also found the need to seal the car park at the rear of the building would adversely impact funds available for future capital works.

A third factor that influenced their decision was that the Council had been committed to a policy of decentralising its staff since the 2008 amalgamations, and relocating staff from Nanango to Kingaroy would be a breach of that policy.

The motion to axe the purchase was passed 6-1, with Cr Terry Fleischfresser opposed.