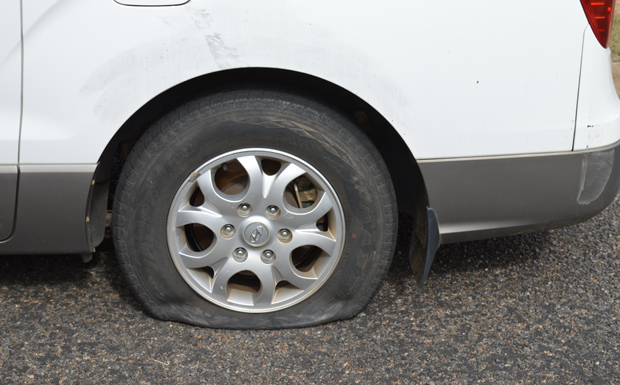 All four tyres on this van parked at the South Burnett Enterprise Centre were punctured, possibly with a screwdriver

The vehicles – including a new car yet to hit the road – were parked at the South Burnett Enterprise Centre in Cornish Street, Kingaroy.

The incident is almost identical to vandalism which occurred on April 2, 2015, when all four tyres on six cars and a bus were slashed.

CTC CEO Nina Temperton said she had no idea who was responsible for the attacks.

“The only people who are hurt by these actions are our clients who cannot get services until we can fix up the vehicles,” she said.

“Obviously we have been targeted but I have no idea who we have offended.

“We are not doing anything at the moment that is in any way controversial.

“The police have been and taken photos and dusted for fingerprints.” 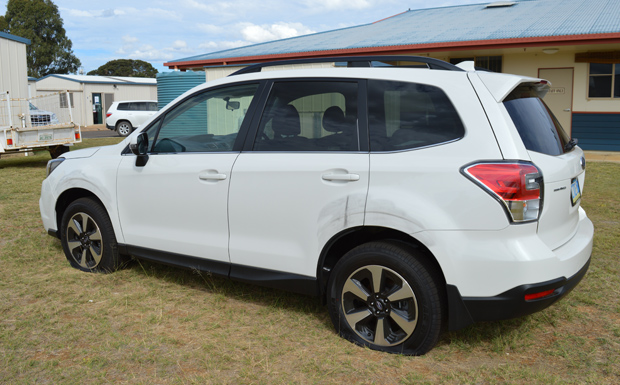 Four brand new tyres on this Subaru were ruined ... police have dusted this vehicle and others for fingerprints

Acting Senior Sergeant Brad Johannesen, from Kingaroy Police, said that while the CTC incident appears to be an isolated case involving someone with a grudge against the organisation, police were also concerned by other incidents of vandalism in Kingaroy recently.

“In recent months Kingaroy Police have been receiving a steady steam of complaints,” he said.

“These have been mostly keying, where an offender runs a key along the length of the car; they seem to be random attacks.”

The damaged vehicles, which can be very expensive to repair, were parked in shopping centre carparks and outside homes when they were targeted.

An 18-year-old Kingaroy woman was taken to hospital for observation after a single vehicle crash on the outskirts of Kingaroy on Monday night.

The incident occurred on Weens Road about 9:30pm.

Snr Sgt Johannesen said there was a driver and four passengers in the vehicle.

The driver allegedly told police he had never driven the road before and had become confused in the dark.

One of the passengers became ill after the crash and was taken to Kingaroy Hospital by ambulance as a precaution.

For the second time recently, thieves have struck at Bass To Barra Marine’s shop in Youngman Street, Kingaroy.

Acting Snr Sgt Johannesen said police believe they have solved the first break-in, which would mean the latest incident was not connected.

The thieves broke into the shop at some time between April 29 and May 2.

Anyone with information about the break-in should contact Crime Stoppers on 1800-333-000.

Goomeri police are investigating the theft of alcohol from the Goomeri Hotel.

Anyone with information about the theft should contact Crime Stoppers on 1800-333-000.