A Most Aromatic Spice

In the history of spice, ginger would have to be one of the most famous and aromatic, besides pepper.

Its origins are not completely clear, as it has been mentioned in historical records from many corners of the world. Ginger also grows wild in many countries.

It is highly likely though that it was indigenous to South East Asia and was traded in China, the Middle East and India where it has been used for cooking and medicinal purposes for centuries.

Eventually it found its way into the early English bakeries. Gingerbread was the favourite sweat of Queen Elizabeth I.

The ginger that most people are accustomed to is the knobbly shaped root that grows underground from the tropical ginger plant.

The plant is an aromatic perennial that also blooms a spectacular red flower. This is where the term ‘Ginger’ (referring to a person with red hair) originates – a fact not lost on my red headed daughter.

These tuberous roots are referred to as ‘rhizomes’, a family that also includes turmeric, galangal and cardamom.

The ginger rhizome has a beige-coloured fibrous flesh covered in a scaly darker coloured skin.

Younger ginger is slightly sweeter and tender, while the late season ginger is sharper, hotter and more fibrous. However, all ginger is very aromatic.

Due to its shape, the whole ginger root is referred to as a ‘hand’ and the protruding tubes are the ‘fingers’. 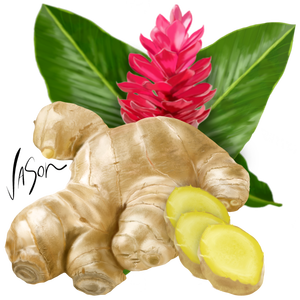 Can be served on steamed rice with a fresh tossed salad.