Radish is the comeback kid of the culinary world.

They were very popular in the 1970s and 1980s, then fell out of fashion for a few decades.

But now there’s hardly a trendy food magazine or modern salad that doesn’t feature thin slices of this colourful ingredient.

Radish is a peppery flavoured root vegetable, closely related to the mustard plant.

Due to its spicy flavour profile, radish isn’t everyone’s cup of tea. I find that people either love or loathe them.

Personally I’ve always been a big fan, and feel there is nothing more satisfying than growing your own, then eating them fresh from the garden.

They can be found in a variety of colours – usually red, white or black.

Radish also varies in shape, from a familiar small bulbous form to the more exotic elongated-shape found in Asia, such as Daikon.

The immature leaves of some radish varieties can also be eaten in salads. 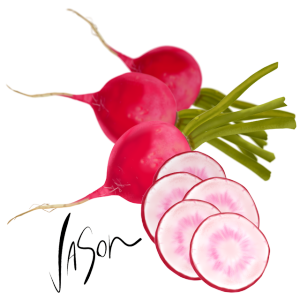