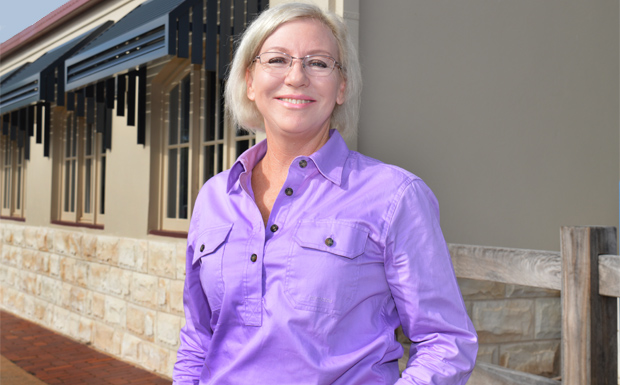 Agriculture Minister Leanne Donaldson – recently appointed to the role – paid a whistlestop visit to the South Burnett this week as part of a roadtrip to help her get better acquainted with the some of the major issues in her portfolio.

Ms Donaldson, the Member for Bundaberg, took over from previous Minister Bill Byrne in a Cabinet reshuffle on December 7.

She drove into Kingaroy on Tuesday afternoon and went straight into a meeting with local AgForce representatives at the Department of Agriculture and Fisheries.

Not unexpectedly, the main focus of the discussion was the proposed relocation of the Tick Line, also the subject of urgent meetings of cattle producers arranged by AgForce at the weekend.

Ms Donaldson told southburnett.com.au on Wednesday morning that the Kingaroy meeting had been “really productive”.

“It was an opportunity for me to hear from industry about how the consultations are going. Also, it was a really good opportunity (to discuss) some of the priorities as industry sees it in addition to the pressing issue of the tick line,” Ms Donaldson said.

She confirmed the Control Zone between ticky and clean country was “definitely gone”.

She said industry had been calling out for changes to the tick process and this was the first opportunity in 30 years for something to be done.

“This process is industry-led,” she said. “And that’s something that I believe is the best way to go about it because industry will come back to government – and (industry) are the people who know what’s needed.”

By “industry” she said she meant the producers living on the tick line, the people directly affected by the proposals.

Ms Donaldson acknowledged there had been a lot of money spent by producers maintaining the current tick line.

“There is certainly a lot of anxiety with people,” she said. “But I think that’s why this consultation process is so important and that’s why I have extended it so there is an opportunity for people to make sure they do have their say, that they can get all the information they want.”

Ms Donaldson said the July 1 deadline to implement the changes was set in concrete.

She said the tick line overhaul was a process which had begun “two governments ago” and people were becoming more anxious the longer it dragged on.

“You need to draw a line in the sand,” she said.

However, Ms Donaldson said that after the new tick line was implemented it would not be “immovable in the future”.

“If people along the tick line have evidence over a period that they have maintained an area tick-free, and have the evidence to support it, that line can, with consideration, move,” she said.

She said the process to do this had been part of the consultations which had been taking place.

“I think there has been a lot of confusion about this,” she said.

She said support from the State Government to maintain the tick line has also been raised during the AgForce discussions.

“We haven’t made determinations about that yet but they are certainly part of the considerations,” she said.

She said compensation was “part of the conversation” but she was not prepared to say if there would or wouldn’t be assistance.

Ms Donaldson encouraged any farmers, or groups of farmers, who had proposals or suggestions about the tick line to be part of the process.

“I think it is a really important thing to be a part of that consultation.” she said.

She said that if people could not manage the maps on the Internet they could go to the DAF office in Kingaroy (opposite Kingaroy Airport) to view them.

“Not everything has to be online. There are opportunities to write, to ring, to have face-to-face talks,” Ms Donaldson said.

Ms Donaldson said she was enjoying her new role, especially getting around the State and talking directly with producers, growers and other stakeholders.

“I am finding that absolutely invaluable and it’s something that I am going to continue doing,” she said.

“I am spending much more time out and about than I am in Brisbane.”

She also visited Parkside Sawmill in Wondai and the Bjelke-Petersen Dam during her South Burnett visit.

Another rural issue which has been making headlines recently is wild dogs, and the appointment of a new committee to the wild dog advisory board “QDOG”.

Ms Donaldson said she had met with the chairman of QDOG, Dave Edwards, while she was in Toowoomba on Tuesday.

“They were talking a lot about that when the former government was in, they were asked to go out and consult and get consensus around what things people believed were important. Which is exactly what they did.”

Ms Donaldson said Mrs Frecklington had also criticised the concept of “cluster fencing” to control wild dogs but this was actually the favoured approach of Federal Agricultural Minister Barnaby Joyce.

“It’s part of a broader strategy, it’s not the only thing being done,” she said.

“Everything that’s been done in the work with wild dogs was policy under the Newman Government. So effectively (Mrs Frecklington’s) criticisms are of her own government’s policies previously.

“What we’ve done is partner with the Federal Government. We’ve put in $5 million with their $10 million to expand the cluster fencing as well as pest eradication.”

And she said plans to scale back 1080 baiting were “not even on the radar”.